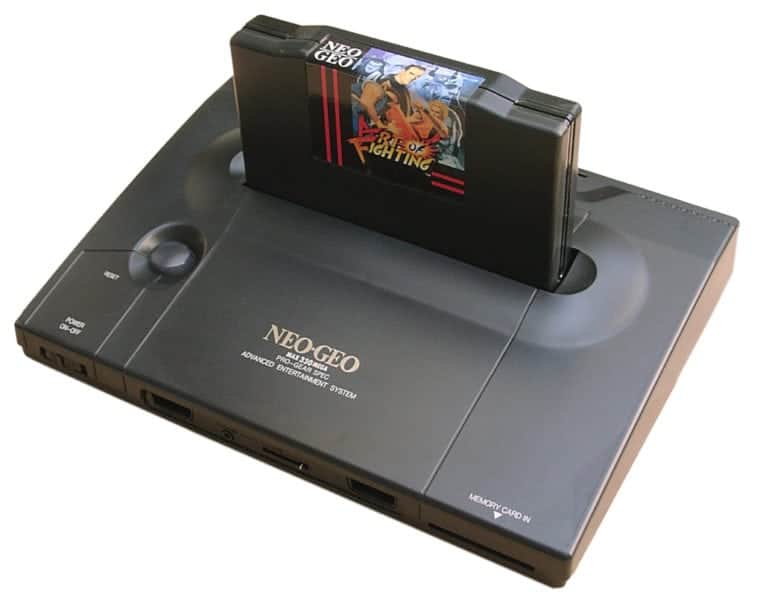 Back in the 90’s, you were in one of two camps when it came to consoles, you either had a Sega Megadrive or a Super Nintendo and with this came lots of rivalry and playground antics regarding who had the best machine.

Cue the obvious Sonic is faster than Mario and Streetfighter 2 is the best on the SNES and so on, however, there was one console on the spec sheet alone that shut everyone up and was know as the Rolls-Royce of games machines.

All Hail The Neo Geo

At the time (and it still is today) the Neo Geo was rare, mysterious and insanely expensive and because it was out of reach for most and the internet didn’t exist back then it gained a mythical status in playgrounds across the land.

What made the Neo Geo so unique then? Well whilst most consoles were getting better at emulating their more powerful arcade cousins.

The Neo-Geo was an arcade machine albeit in a console form. Based chip for chip on its arcade brother the Multi Video System (MVS) it was literally arcade perfect which for those who were gaming back then was the holy grail of home consoles.

The only place where most of us mere mortals could play a Neo Geo games was in the arcades themselves and on the SNK manufactured arcade cabs.

The Neo Geo Had The First Memory Card

Some may remember seeing a memory card slot where you could load your position at home and come down to the arcades to carry on.

Whilst this may sound a bit crazy to go somewhere and spend money on a game you have at home, it certainly would have shocked those that witnessed someone doing it so perhaps it was done for boasting reasons.

Why Was The Neo Geo So Expensive?

Now, why were the games so expensive? Well, back in the early 90’s memory chips or ROMS were very expensive to make. The largest Megadrive games of the time were no more than 16 megabits.

The smallest Neo-Geo games, Puzzled, a Tetris-style cutesy puzzle game clocked in at 22 megabits but most of the early games were around 50 megabits or more, why? Well, they had huge characters and lots of sound samples compared to it’s other home rivals.

Early games like the superb shooter Nam 1975 or Baseball Stars had either voice dialogue or commentary which for 1990 was unbelievable and impossible on lesser systems.

The Neo Geo was a machine with compromise and this premium commanded high prices.

It wasn’t really until around 1992 that things really started to kick off for the Neo Geo.

Prior to this there was a really good mixture of genres with the proto first person shooter (sort of) The Super Spy, as well as side-scrolling, beat ‘em ups such as Mutation Nation and a plethora of Side scrolling shooters including Andro Dunos and the beautiful but insanely difficult R-Type inspired Last Resort.

Some were good and some were awful (Legend of Success Joe springs to mind here) but it was nice to see variety.

What made it take off was one on one fighters thanks to the phenomenal success of Capcom’s Streetfighter 2.

100 Mega Shock And Beyond

SNK had dabbled with Fatal Fury back in late 1991 but it wasn’t until Art of Fighting and Fatal fury 2 came out that people started to take notice and with this, the fighters kept on coming out.

It became the system of choice for the genre and was enriched and the poorer for it as well.

Sure there were a few games from different genres along the way, Super SideKicks soccer came out as well as the occasional side-scrolling games like Sengoku 2.

However, SNK had found its niche and literally all you could play was beat ‘em ups.

A lot of effort was put into the main franchises.

Art of Fighting looked amazing when it came out, huge characters, had insane sprite scaling that no other home system could even attempt and some of the beefiest crunchy sound effects ever to be heard in a game were all here.

As time went on, we were treated to some new games like Samurai Shodown but it was mainly sequels or updates to previous fighter outings.

King Of The Fighters

In 1994 SNK decided that it would be rather nice to put all their characters from all their games in one place (and to hell with the story and timelines) with the still running King of the Fighter Franchise.

With the start of the KOF series the overall megabit count shot up, from 194 in the first game all the way to 704 Megs in the last commercially released game on the system in 2004 (Samurai Spirits 5 Special if you really wanted to know)

Costs Down Load Times Up

This was technically the same as its earlier cartridge-based version but the game was on CD which brought the price down to around £50 a game.

The downside was very long load times with its single speed CD drive so it kind of flopped because of this and also because more powerful 32-Bit consoles like the Playstation and Sega Saturn were less than a year away from release.

The original cartridge machine lived on, though.

1996 saw the release of a side scrolling platform shooter that was literally a work of art.

Metal Slug spawned numerous sequels and because it was release in really small numbers now changes hands for at least £1500 a copy.

The games may have been expensive back in the day but generally, they are worth a lot more now.

If you want to get one and start collecting you better have a six figure salary job or consider remortgaging and even then some games were launched in such small numbers that they go for crazy money.

£20,000+ has been known for one of the five supposed copies of the European version of Kazuna Encounter which is a run of the mill fighter.

The machine kept on getting games released on it until 2004, it even outlasted SNK themselves who went bankrupt in 2000 (and later came back as SNK Playmore) so what’s the legacy of the Neo-Geo then?

In our opinion, the Neo-Geo was a product of its time. It was powerful, expensive, exclusive and downright desirable, more so than any other console ever released.

Sure they were some absolute stinkers released on it but there were some of the finest and still good looking games made for it that make it such a classic machine.

Future Games On The Neo Geo

There’s also games still be made for the Neo Geo from indie developers such as Xeno Crisis and Project Neon being just two current example.

These games are adding life to this 30 year old console that keeps on chugging along and as long as there are fans and collectors we doubt it will stop.

As a console, we doubt very much that there will ever be anything like it made again.

The Neo Geo really was a special console and whilst it may not take the crown for the best console ever due to its exclusivity it definitely deserved the accolade of the most expensive one ever made.

What do you think of the Neo Geo? What’s your favourite game or series on the arcade system? Let everyone know in the comments below.