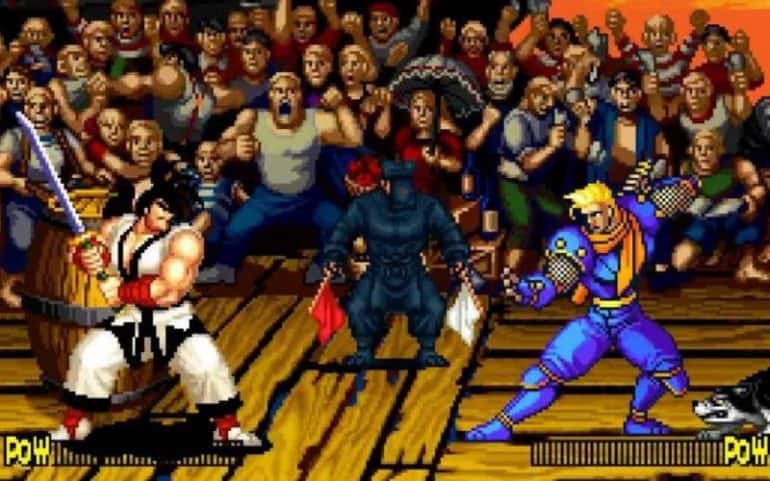 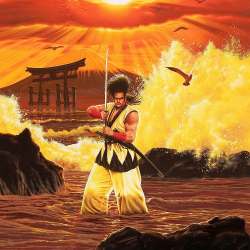 Nothing could stop Capcom’s juggernaut in the arcades or at home that is until SNK released Samurai Shodown back in 1993.

Until this point SNK had given fighting fans Fatal Fury and Art of Fighting.

Both are great games series and while they came close to Capcom’s seminal fighter it wasn’t enough to take it off the top spot.

Samurai Shodown hit the arcades and the Neo Geo AES home system in 1993 and instead of having a modern day setting.

It was set in the 18th Century and on top of this had a killer app that was weapons instead of fists to defeat foes with.

It’s this weapon based combat that changed everything for gamers and started a much loved series that’s still getting releases today.

When Samurai Shodown starts up you’re treated to a slick intro with tons of sampled speech and it sets the stage nicely but you would expect something like this as its on a 118 Megabit cartridge which was huge back in the day.

Upon starting the game you can choose one of 12 characters. Each has its own style of fighting from Samurai’s to French Knights and some even have animals to aid them in battle such as Galford who has a lightning fast dog he can set upon your foe.

Special mention has to go to the character called Earthquake.

He literally takes up half the screen and even today looks mightily impressive and even more so when you compare to the Mega Drive and SNES versions which whilst good do not even compare to the Neo Geo version which would have helped justify its £200 price tag back in 1993.

Even today its impressive to look at when you consider the tech its on.

Samurai Shodown looks utterly amazing with fantastic character animations and some epic special moves that are a feast for the eyes.

The backgrounds also need a special mention as they are detailed with animations and small touches that you’d expect from a high quality Neo Geo game.

The Neo Geo had some great sprite scaling abilities and Samurai Shodown uses them in generous amounts with the action zooming out if the fighters are far from each other and with this you get a broader view of the backgrounds too.

When in close it zooms in seamlessly and aids the intense action perfectly.

Depending on who you’re fighting you’ll either good an in your face soundtrack with heavy metal guitars on Galford’s and Earthquakes stages or orchestral crescendos on Charlotte’s stage while others are quiet and atmospheric with ethnic chanting or if in a peaceful setting the characters swishes and running sound effects shine through.

It makes for a lot of variety in the game and one that works really well.

Playing the game is obviously what it’s all about and it will take time to master.

There are some characters that have quite a few special moves and if you are starting off try it with Galford as his moves are fairly easy to pull off.

One thing to note though is that you’ll fair better if you don’t go crazy with wiggling the joystick about too much.

Be methodical and precise and the special moves will get pulled off each and every time.

Samurai Shodown is not an easy game but feels much fairer than other Neo Geo fighters such as Art of Fighting 2 which is well known for its difficulty in single player sessions.

A great feature that started in this game was the POW meter which is at the bottom of the screen for each character.

If it fills up your character will literally turn red from anger and this is a double edged sword.

Not only can you do more damage but the person your fighting can also hurt you more but if you go for it you can really do some damage quickly.

It’s a nice touch that adds an extra strategic dimension to the fights.

One cool aspect is that in game food and coins will be tossed in to the arena and if you grab the food you’ll get a little bit of your health back, not much but it can change the tide of battle.

The coins add points to your score as well.

Samurai Shodown is an epic piece of gaming history and even today plays and looks amazing just like it did way back in 1993.

It’s easy to pick up and play straightaway but with time and practice is where you’ll see the benefits mostly.

Time has been kind to this game and it’s one that’s easy to find on the Neo Geo and not massively expensive (£80-£100) compared to other titles and is a must have in any Neo Geo collection.

Other System Samurai Shodown Is Available On

If you don’t have a Neo Geo then fear not as it was released on most home consoles with the 3DO version being particularly accurate.

There are also cut down versions from Takara on the Megadrive and SNES as well as on compilations on the Playstation 2 as well that could be worth adding to your collections.

For modern console gamers you can pick it up on the Nintendo Switch for under six quid which is excellent value for money and if you’re a fighting game fan and have never played it go get it as you’ll love it.

What’s your view on Samurai Shodown?

Do you love the game? Let us know what you think in the comments below and add your score below as well.

Samurai Shodown (1993) Neo Geo Retro Review
Is it worth playing again?
Samurai Shodown is a stone cold classic Neo Geo game. It's accessible and fun to play both solo and against a friend and it looks and sounds utterly stunning still.
Graphics
94
Sound
91
Gameplay
92
Classic Factor
91
Reader Rating8 Votes
90
Good Bits
Looks stunning
Sounds amazing
Plays like a dream when you get more experienced
Bad Bits
Takes a while to master the moves
Some characters are easier to use than others
92
Retroheadz Score