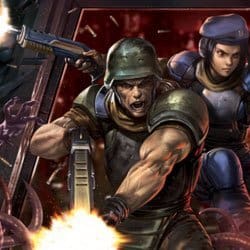 Think your Neo Geo, Dreamcast or Megadrive is just for collecting and playing old games from back in day on?

UK based developers Bitmap Bureau are getting ready to ship their new game Xeno Crisis and it looks great.

Xeno Crisis might look familiar and rightly so. Xeno Crisis is an arena shooter that pays homage to classics such as Smash TV, The Chaos Engine and Mercs and really looks the part.

The game which started out as a Kickstarter is expected to be available to have playing on your own console during Q2 2019 (at time of press).

Xeno Crisis takes place on an abandoned research base.

You (and a second player) are tasked with finding out what happened to it, rescuing scientists and dispatching over 40 different types of alien foes across 7 different zones.

Want to see it in action?

Check this launch trailer out for this manic looking shooter. It looks pretty awesome!

How much will Xeno Crisis cost to buy on the Neo Geo?

Neo Geo games have always been expensive, however given that you can literally fork out thousands of pounds for some titles.

The AES home console version will retail for £199.99 which is frankly, pretty cheap for a new Neo Geo game and even better value for a new game which will have a limited run.

On top of that its a 512 meg cartridge so that’s up there with the larger Neo Geo titles like Metal Slug 3 and Shock Troopers (which it also pays homage to).

MVS arcade versions are already sold out though.

How much is Xeno Crisis on the Megadrive and Dreamcast?

The Megadrive version is a snip at £55 for a fully boxed version or you can get the cart on its own for £40. A ROM only version to play on an Everdrive is only £15.

The Dreamcast and Neo Geo CD versions are the cheapest coming in at a very reasonable £30.

This is most likely due to the fact that producing CD’s is so much cheaper than putting together new cartridges for old machines.

You can buy Xeno Crisis direct from Bitmap Bureau’s website.

Will Xeno Crisis be on modern consoles or PC?

Xeno Crisis is also coming to Steam and the Nintendo Switch as well but could be on Xbox One and PS4 too.

What do you think of this game? will you be buying Xeno Crisis? If so what system? Let us know in the comments below.