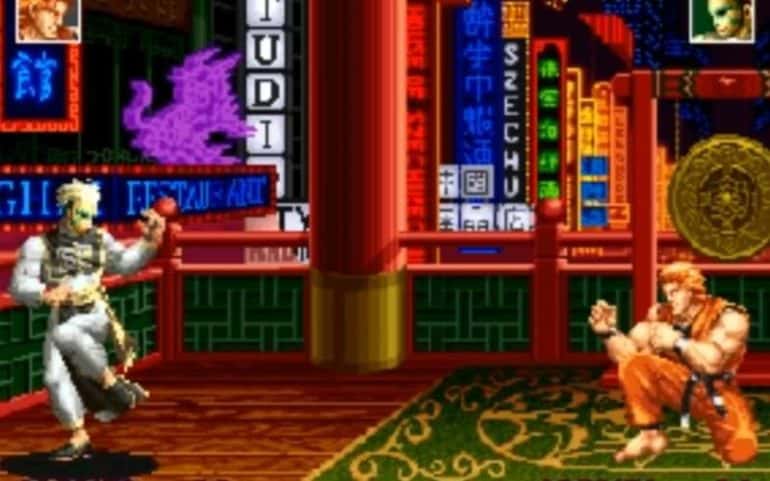 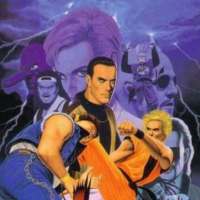 Art of Fighting is the first 100 Meg sized game to come out on the mighty Neo Geo and help usher in the next phase of SNK’s home arcade domination.

It came out in 1992 and was a huge hit in both the arcades and on the home system and paved the way for two more sequels and other series like The King of The Fighters, Samurai Shodown and other franchises that had their beginnings on the Neo Geo.

It also introduced a lot of new things that became standard on future games on the Neo Geo.

Art of Fighting is story led and is set in the early 80’s and is in the same universe as the earlier Fatal Fury release.

You play as either Ryo Sakazaki or Robert Garcia (who is a blatant rip of Terry Silva from The Karate Kid 3 if there ever was one) and you progress through the fictional South Town to rescue Ryo’s kidnapped sister Yuri who has been taken by the mysterious Mr. Big.

The story takes you to various locales around the city and ends up with a final fight between you and Mr. Karate himself and features lots of cut scenes in-between bouts that drive everything forward.

Given that Art of Fighting is just over 100 Megabits in size (102 to be precise) things got much bigger than previous games on the Neo Geo.

The character’s themselves are probably the first thing to notice. They are huge and take up a big portion of the screen.

Luckily the game also introduced sprite scaling that zoomed the action in and out and whilst much smoother in later games was a huge wow factor back then and still looks cool today.

Other things were prominent too such as the fighters showing visible bruising and cuts as the fights took place and of course the locations where each fight took place really gave South Town a real vibe and atmosphere.

The other star of the game has to be South Town.

South Town feels alive and a good fighting game is only as good as it’s backgrounds and Art of Fighting really delivers here.

From dingy bars and dives to China Town, Art of Fighting showcases what the Neo Geo is capable of.

With huge amounts of colour and detail the locations for each fight are wonderful to look at and be apart of.

On top of this there are lots of details and animations of background characters that would be hard to even attempt on the other 16-Bit consoles of the time and when characters break apart and the action zooms out you get a larger overview of the arena you are fighting in.

It just looks great and special mention needs to go to Lee Pai Long’s location as it really shows off the colour palette and graphical prowess of the Neo Geo.

Art of Fighting being an early fighting game only gives you two playable characters in one player mode.

The fighting styles of Ryo and Robert are different enough to warrant playing as both characters and the story for each is too.

The moves you can pull off have a tactical element whereby you need to take time to recharge your spirit level by holding down all of the buttons.

Doing this leaves you vulnerable to attack but you can also taunt your opponent with the D button and zap their special move energy as well.

Fights can be won or lost pretty quickly by utilising this unique feature of the game.

AOF is not easy to beat especially later on which can either be frustrating or spur you on to master the game and all it’s quirks and this is where it’s rewarding.

As with all good fighting games in-between bouts you get to play some bonus games and Art of Fighting delivers some fun one.

You get to side smash glass bottles with a swift and powerful Karate Chop and smash down on blocks of Ice as well as learn how to pull off Desperation Blows which are huge special moves that will rip tons of life off an opponent and are also a sight to behold.

The bonus rounds are fun and do give a reward with new special moves being revealed and how to do them as your reward.

As with all fighting games, playing against another human is always the fun part and AOF delivers on this too.

In versus mode you can choose one of eight characters from the game. There are ten in total but the other two are non playable which is a shame.

A fun character to play as is Lee Pai as he has Vega-esque metal claws and when you pull off his spinning move and it connects it definitely gives you a buzz.

Pump Up The Volume

Art of Fighting delivers in the sound department too.

The soundtrack oozes atmosphere and matches the area you are fighting in perfectly and this being a Neo Geo game comes with stacks of digitised speech which back in ’92 was a really big thing.

Lots of the music will have you humming for days after as well and the sound effects are meaty and loud throughout so much so that when you hit someone you can almost feel it.

Basically crank it up and enjoy it as the whole package is spot on!

We mentioned the huge sprites and Art of Fighting really looks the part.

Yes some parts such as the scaling in and out is a big choppy but this was the first fighting game to bring this in. and to be honest it adds to the vibe of the game.

With its detailed and giant characters, battle damage and stunning backgrounds throughout it really stands out and still will surprise you that this was out in 1992 when you compare if to it’s contemporaries and other system of the day it really is a looker.

However, it will still amaze you when seeing it in action and whilst it’s hard to master and finish will be one that will keep you coming back again and again as the graphics, sound and atmosphere of the game is just plain awesome.

Everything about Art of Fighting is big, bold and in your face.

It’s fun to play versus a mate and hard to master in one player mode and whilst it came out on other systems later on, the original Neo Geo version is still the best way to play it.

Getting Hold Of Art Of Fighting

Picking up a copy is not too difficult either although the Euro and US boxed version go for a lot on eBay, the Japanese version is far cheaper to get hold of.

Failing that you can also get it on the Nintendo Switch for a few quid.

Either way if you are a fan of one on one fighting games and the genre’s history then this game is a must play.

Art Of Fighting (1992) Neo Geo Classic Review
Is it worth playing again?
Art of Fighting is bold and big and showcased what the Neo Geo could do back in '92. As a game to play today its still fun and exciting and well worth getting hold of.
Graphics
90
Sound
92
Gameplay
82
Classic Factor
82
Reader Rating4 Votes
91
Good Bits
Massive sprites
Fun Bonus Rounds
Bad Bits
It's hard as nails
Only two playable characters in single player mode
87
Retroheadz Score