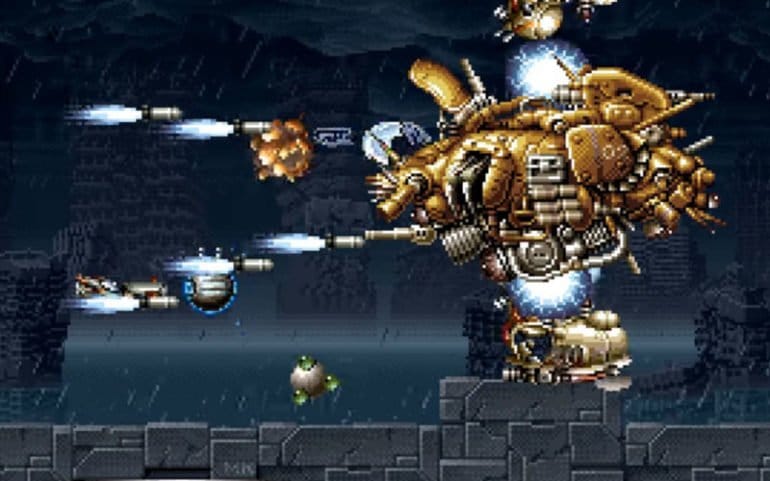 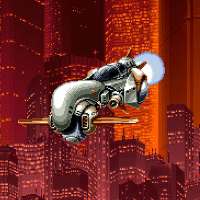 Last Resort is a slick side scrolling shoot ’em up that came out on the Neo Geo back in 1992. It was also available in the arcades via the Neo Geo MVS arcade system.

Well, it’s a shoot ’em up so nothing in-depth but you get to take control of a ship that to thwart what looks like a mix of aliens, robots and human foes so yeah the usual stuff.

What makes Last Resort different, apart from it’s £200 price tag upon launch is the look and quality of the R-Type influenced game and the other things ‘borrowed’ from popular culture and Sci-Fi.

Upon getting passed the impressive title screen and starting the game, Manga fans are treated to what looks like the other star of Akira which is Neo Tokyo, or should that be a heavily influenced cityscape that riffs off it at least.

Your ship starts it mission flying along a motorway whilst shooting hordes of enemies.

A neat touch (which this game has many of, more on that later) is that you can also shoot the cars driving along which explode in a very satisfactory way.

Players are also introduced to the R-Type style orb that you collect early on which is vital to have if you want to progress in the game.

Overall it looks stunning and set the stage for things to come, if you can get that far that is.

Later levels have rain soaked ruins and your typical space based themes and of course end of level bosses.

Talking about bosses, they are pretty spectacular in places, from ones that go beyond the screen and ones you think, ‘hey, hang on isn’t that the T-800?!?’.

Yep, its great to see it in action, it’s just getting to them that’s the problem but once you do good luck as they will be throwing a ton of ordinance at you.

Overall the bosses are hard but play it enough and you’ll work out how to defeat them.

I mentioned some neat touches earlier on in the article and Last Resort doesn’t dissapoint.

From the little cars travelling along on the motorway to people being thrown out of vanquished ships as you destroy them to the cool way the missiles hammer out of your ship along with contrails, you know your playing a Neo Geo game and back in ’92 this would have blown many people away.

Luckily today it still looks cool and it adds character to what is already a solid shooter.

Finally, the orb which is vital to progress has some neat tricks up its sleeve. Depending on the direction you are flying it will shoot that way and you can charge it up and aim it in any direction you want.

Special mention has to go to the soundtrack. It oozes class.

The music is moody and fits in perfectly to the desperation and despair any outnumbered pilot must feel and it also captures the futuristic Sci-Fi setting very well.

Sounds effects are meaty and satisfying throughout too and we’d say along with the graphics it is a major thing that makes this game great.

The main gripe with Last Resort has to be its difficulty.

Yes, its a Neo Geo game so its just and one for the hardcore gamers but it doesn’t help that when you die (and you will…lots!) you respawn at the start way back from where you were.

It’s nothing that people didn’t expect back then but today its harsh and can make gamers give up in frustration.

Is It worth Playing Today?

Last Resort is a stunningly atmospheric game, its definitely a jewel in any Neo Geo owners crown, it cost’s a huge amount to own on the original system system.

Thankfully Nintendo Switch owners can pick it up for under £6 and that’s worth grabbing in our opinion and for Neo Geo collectors you need to dig deep but you probably know this already.

Last Resort is also available on the SNK Arcade Classics Vol 1 compilation that came out on the PS2, PSP and Nintendo Wii.

Overall its a great game that’s let down by frustrating restart positions when you die. However its heaven for those that love a challenge and Last Resort provides this by the bucket load.

Last Resort (1992) Neo Geo Classic Review
Is it worth playing again?
Marred by re-spawning at the start of levels, Last Resort is one tough cookie to beat but with stunning graphics and moody music throughout you'll want to see it to the end.
Graphics
94
Sound
90
Gameplay
83
Classic Factor
75
Reader Rating4 Votes
92
Good Bits
It's stunning to look at
Music fits the game perfectly
Bad Bits
Damn its hard
Not a hugely long game (if you get that far)
86
Retroheadz Score
More Last Resort