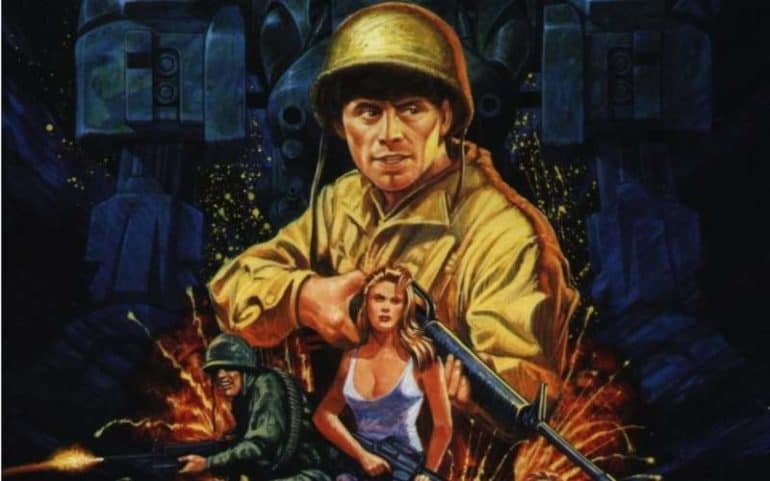 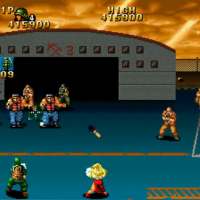 It’s historic because it holds the title of being the first official release on SNK’s super powerful Neo-Geo Advanced Entertainment System with its NGH-001 serial on the spine of the chunky box that houses the gargantuan Neo-Geo cartridge.

The game gives you a third-person perspective in a sort of pseudo 3D plane.

Think Cabal in the arcades (which it obviously pays homage too).

The game pits you against a whole host of enemies that are hell bent on ending you and making you reach for your pocket to throw in more coins that the arcade version would do.

Luckily, with the home version you get four credits alongside your three stock lives and whilst the first couple of levels are fairly challenging but fair, it’s the later levels that are going to eat lives up faster than Usain Bolt can do the 100 meters.

You move left to right on the screen to avoid bullets, bombs and so on that will be coming at you with an insane frequency. Of course, you can fire back with your standard shooter or flamethrower and rapid fire guns that you pick up as powerups along the way.

The catch is though that when you are shooting or lobbing grenades you can’t move so you need to balance firing and moving at all times to stay alive. It’s a hard thing to do, that’s for sure.

Naturally, a game like Nam ’75 has huge end of level bosses and our favourite is on the second level where you take on a huge flying battleship after taking down the enemies air force on a platform at 30,000 ft, ok…then.

Anyway, It’s a sight to behold and little touches like firing at the side of the plane shows pock marks from the bullets, it’s a nice touch and one would expect if you just shelled out £180 for the game.

Sound effects and music is great, the spoken intro was awesome back then and it still sounds cool now with its ‘Do I have to go to this hell again’ speech sounding like it’s come straight out of Apocalypse Now.

The music fits the levels perfectly.

Again the quality in this department is why people were prepared to pay top dollar for a Neo-Geo.

Picking up a copy today is quite easy to, as it was the first game to come out it was, we presume released in quite high numbers.

The rare one to find is the non-censored version of the box which by the looks of things had to go through customs in some conservative country and so the ladies leg and sometimes, chest are crudely marked out with a marker pen which is a shame as the box art is awesome.

If this is the only copy you find then don’t worry too much, if you’re a serious collector though, or want to be one then hunting down and original is possible but will cost a lot more.

Is it worth picking up and playing today, yes. It’s a fun game that will take a lot to beat but for a quick blast and the fact that’s it’s not a fighting game shows that the Neo-Geo was a machine that could give more than one genre and do it well.

For those that don’t want to fork out over £100 for it, it’s also available on the Nintendo Switch for under £6. Bargain!

Nam 1975 (1990) Neo Geo Classic Review
Is it worth playing again?
Nam '75 is fun to pick up and play. It gets hard in places but its worth a go just to see the first Neo Geo release in action.
Graphics
70
Sound
75
Gameplay
75
Classic Factor
80
Reader Rating10 Votes
88
Good Bits
Excellent play mechanics
Good music
Bad Bits
Gets insanely hard on later levels
75
Retroheadz Score