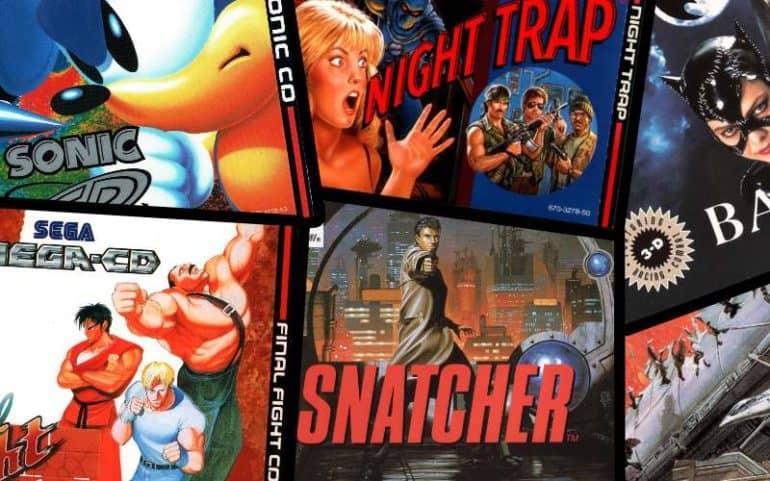 Sega were the kings of hardware add-ons back in the 90’s and their most successful one was the Mega CD or Sega CD for those reading in the U.S.

Launched in 1991 in Japan, it was a much sought-after upgrade to the mighty Mega Drive which sat underneath the Mega Drive like some cool looking Seperates Hi-Fi system.

How Much Did The Mega CD Cost At Launch?

It made its way to the UK in April 1993 and cost a whopping £269.99 to buy new which is the equivalent of over £550 in today’s money which you can see why your folks might have said no chance to you having one.

The Mega CD came bundled with seven games in the UK; five were Mega Drive classics which didn’t show off the new shiny machine, a shoot ‘em up (which also came out on the Mega Drive in Japan) and Cobra Command, a Laserdisc FMV arcade game that first came out in 1984.

Later on the cheaper and not so cool looking Mega CD 2 came out that brought the price down along with a ‘portable’ version called the Multi-Mega which was a combined Mega Drive and Mega CD which sort of resembled a Personal CD Player which were all the rage back then.

The peak year for games was 1994 and the Mega CD finally gave up the ghost around 1996. Gamers had moved on to the Playstation and Saturn or were looking forward to the N64.

The Mega CD was often derided for having ports of Mega Drive games with flashy intros and Full Motion Video (FMV) or were FMV games that looked impressive at the time but only allowed basic inputs and in the case of games like Road Blasters, Time Gal and Dragons Lair usually saw you ending up crashing or dying because you got the timing off by a millisecond which led to many a control pad being thrown in rage across the land.

Are There Any Good Games On The Mega CD?

Thankfully, there were some games that either utilised the Mega CD’s power and the storage capacity of CD-Rom or were generally regarded as great games to play.

So, if you’re looking to start collecting for this classic piece of 90’s hardware or have a desire to dig it out from the darkest recesses of your parents loft then Retroheadz has a run down of the cool games that either took full advantage of the machine or are just plain fun to play.

Naturally, most of these games require deep pockets to get today but that aside you can’t go wrong with these Mega CD Games.

Final Fight was all the rage and the Mega CD version is frankly the best home conversion you can get in the West.

The games plays great and unlike the SNES version has two player as standard and is a faithful conversion of the arcade game with all the levels and locations of Metro City included and all three characters to choose including the mighty Haggar.

The Mega CD was ideal for games like Dune which is a cross between an adventure and strategy game as you rally the Fremen and take control of Arrakis from the Harkonnens.

It came with full, decently acted speech which made the game come alive and is regarded as one of the best representations of Frank Herbert’s classic science fiction books.

This is a essential game to play if you are a fan of Dune although you can also get hold of the PC version on Abandonware sites if you want to save some money.

Sol-Feace came bundled with the Mega CD when it came out and is a solid side scrolling shoot ‘em up with some cool CD quality music and animated cut scenes throughout.

If you like shoot ‘em ups then this one is really easy to get hold of and cheap as chips and is a good as most Mega Drive shooters.

We love the SNES version of Batman Returns from Konami and whilst the Mega CD version has the same side scrolling beat ‘em up action that the Mega Drive it also includes driving sections that show off the Mega CD’s capabilities.

It has tons of sprite scaling effects and whilst its aged a bit as all 90’s driving games have done it still an impressive showcase of what the Mega CD could do and if you remember back then everyone wanted to play it.