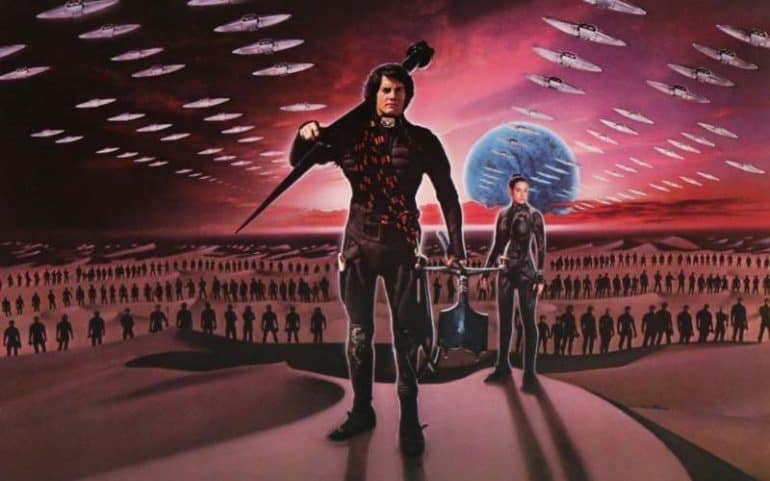 Dune: The Cult Classic Sci-Fi Movie That Deserves A Watch

Way back in 1965 Frank Herbert released the Novel Dune. It became a cult classic and went on to win both the Hugo and Nebula Awards for fiction.

The novel was a dark and twisting story that many readers found hard going.

It dealt with concepts of new religion and space travel that were extremely challenging.

Dune was written in such a way that nothing was left to chance, it paints ever scenario into your mind but doesn’t speak down to its audience in any way.

It was so complex that the idea of creating a movie seemed impossible.

Dune Had a Rocky Start

Even Ridley Scott had tried and given up.

Dune was released in 1984 and was an abject failure and failed to generate enough ticket sales to even cover the budget.

Critics hated it and audiences seemed to find it confusing and drawn out but is it really all that bad?

Well, there’s a reason we’re writing about Dune and that’s because we love it.

It’s understandable that it may not have clicked with audiences straight away, David lynch was forced to cut the movie down considerably to make it an acceptable length for your average movie goer.

Unfortunately this meant that his full vision couldn’t be realised which is a crying shame because what we do have is still one of the best sci-fi films of all time.

A Game of Thrones

In case you aren’t aware of Dune let us give you a quick breakdown of what it’s all about, no mean feat we can tell you.

Set 10,000 years in the future Dune follows a young man named Paul of House Atreides. His father Duke Leto is popular in the Empire with is ruled by Emperor Shaddam IV.

Emperor Shaddam suspects Duke Leto of plotting against him and plans to have him destroyed.

House Atreides is awarded a coveted mining contract on the planet Arrakis also known as Dune. The planet is rich in a substance known as the Spice which is essential for space travel and is known to expand consciousness.

The Emperor then sends the rival House Harkonnen to attack them on the planet.

Paul escapes his murder and finds himself stranded in the deserts with his mother where he discovers the natives known as the Freman.

The Freman have a prophecy that one day a man will come who will free the planet of the Empires rule and bring a new peace to the universe.

Is Paul the new ruler that the prophecy refers to? Of Course he is and his rise to become a new Messiah is a joy to watch.

Whilst some of the special effects may seem dated now it’s a testament to the quality of the film that this doesn’t hinder your watching in the slightest. In fact much like many classic sci-fi movies it only adds to the atmosphere and spectacle.

Fans of the film will never forget the first time they saw it and most will have watched it multiple times over the years.

Whilst on the subject of special effects there is one thing that sets this film apart from so many others and that’s the planet Arrakis itself.

Every scene outside on the planet has a dusty orange hue whilst those who have been exposed to the spice have glowing blue eyes.

With its mysterious Freman inhabitants, Stillsuits which turn sweat into drinking water and the planets true rulers the Sandworms you get a real sense of how hostile this dry and scorched planet really is.

As well as Arrakis the other impressive planet we see is the Harkonnen home planet, Giedi Prime.

Geidi Prime is a dystopian industrial nightmare that is brought to life thanks in no small part to the original concept art of H.R. Giger.

All we see of the planet is cold black and shiny with anthropomorphic buildings that are unnervingly mechanical and suggestive.

The Sandworms, much like other classic sci-fi creature creations, are often the most remembered part of the film.

They are massive and are attracted to vibrations and patterns which cause the Freman to walk in a strange way as to not attract them.

They are truly incredible and when they rise from beneath the sands there’s little doubt of who’s truly in charge.

The scenes where they swallow entire harvesting machines and where they are ridden into battle with hundreds of Freman on their backs are genuinely breathtaking.

What Dune Could Have Been

All of this attention to detail make this one of the all-time greats despite its controversial history.

Well, David Lynch refuses to discuss the movie and has even had his name removed from some releases. That’s pretty extreme.

He needn’t worry though as Dune is a masterpiece of sci-fi cinema which no true fan of the genre can argue.

Originally, Dune was supposed to be a trilogy to rival Star Wars as a deeper and more adult alternative.

It’s a genuine shame that we never got to see the other two films which it is believed would have followed the next two books.

No doubt if these had gone ahead there would have been a new controversy though as after Paul ascension to new messiah, or Kwisatz Hadderach as the Prophecy names him, he starts a Jihad against those who don’t follow his rule.

In any case Dune will forever be one of our favourite movies so if you haven’t seen it yet then what are you waiting for? Give it a go and if you can buy it on Blu-Ray.