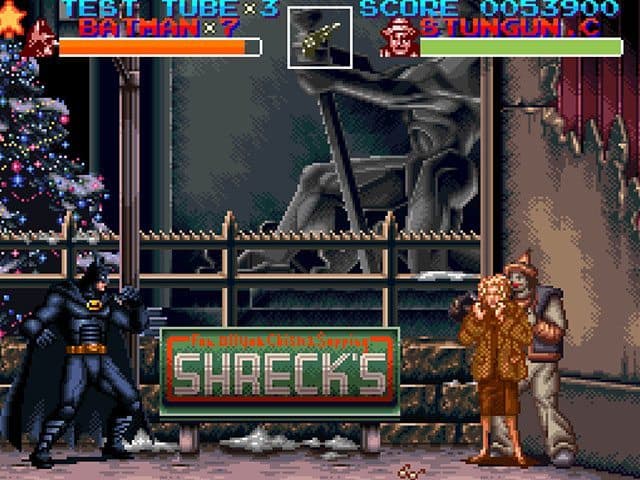 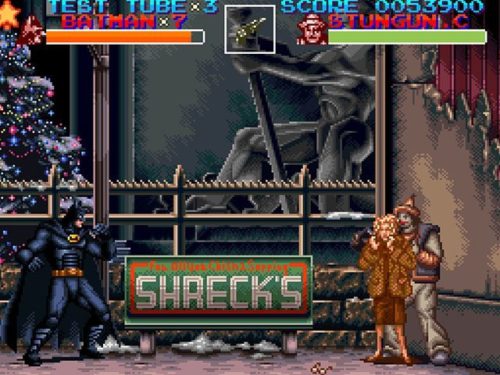 Game’s that are tied to a film are usually awful, there normally aren’t many exceptions.

They are typically rushed out to capitalise on the hype around the film. I mean, who cares if it plays like a stinking turd, there’s money to be made so never mind the gameplay, there’s a deadline to reach.

Batman Returns on the Super Nintendo sticks a bat gloved middle finger up at this formula.

Firstly, Batman Returns was launched a full year after the hit sequel to the 1989 classic Batman movie and was developed by none other than Konami.

As many of us know Konami were in their prime during this period of videogame history with some seriously good quality hits already under their belt on the SNES and elsewhere.

A Movie tie-in that is awesome

Batman Returns is quite possibly one of the best movie tie-in games ever made and one of the most exceptional side scrolling beat ‘em up’s ever made.

The game features large, colourful and well animated sprites, the enemies are for the main part directly from the film as are the end of level bosses.

There’s even a driving level which for its time blew people away with its slick Mode 7 effects in full effect.

It’s only has a couple of downsides; the first is that its single player only so no Streets of Rage co-operative play here and the difficulty does ramp up in later levels.

These gripes aside, they really went to town on this. There are some really neat touches, let’s take the opening level in Gotham City Plaza for instance.

Here you get to grips with Batman’s repertoire of moves and experience for the first time some very satisfying things that you can do in the game.

Who can forget it when you grab two Clowns and knock their heads together and when done has an amazing cracking of skulls sounds or when you throw an enemy into a shop window or knock them off their motorbikes which are coming in from all sides at you.

Did we mention it gets quite hectic?

Well you have a few more tricks up your spandex sleeve.

The first is that you have weapons like a Batarang.

Batman’s long range bat shaped Boomerang and if things get particularly challenging then you can drop a Test Tube to clear the screen of the hordes of Clowns that are hell bent on ending you.

Incidentally, Test Tube has to be the weirdest name for a smart bomb ever!

Batman Returns has lots of neat touches and follows the film closely.

Cutscenes from the movie feature between the levels to aid your progress but the other thing that Konami did well was with the soundtrack although they do have a track record with this side of things.

The SNES is great at doing orchestral soundtracks and the cinematic soundtrack really gives you the feeling that this is a polished game.

All this helps build it up to the finale with non other than the main protagonist, The Penguin himself.

Overall you definitely owe it to yourself to re-visit the game, get it out of the loft if you have it still or jump on Ebay and buy it.

You won’t regret it!

What do you think of Batman Returns? Add your score and let everyone know your review of this classic SNES beat ’em up.

Batman Returns (1993) SNES Retro Review
Is it worth playing again?
A movie tie-in that is not absolutely rubbish. Instead its a must have with awesome moves, great soundtrack and its a faithful recreation of the 1992 movie. Only let down by not having a two play mode but hey-ho, can't have everything.
Graphics
93
Sound
85
Gameplay
80
Classic Factor
80
Reader Rating3 Votes
92
Good Bits
Looks and plays brilliantly
A movie tie-in game that's great to play. What a rarity in itself!
Bad Bits
Only one player
Has some difficult moments
85
Retroheadz Score