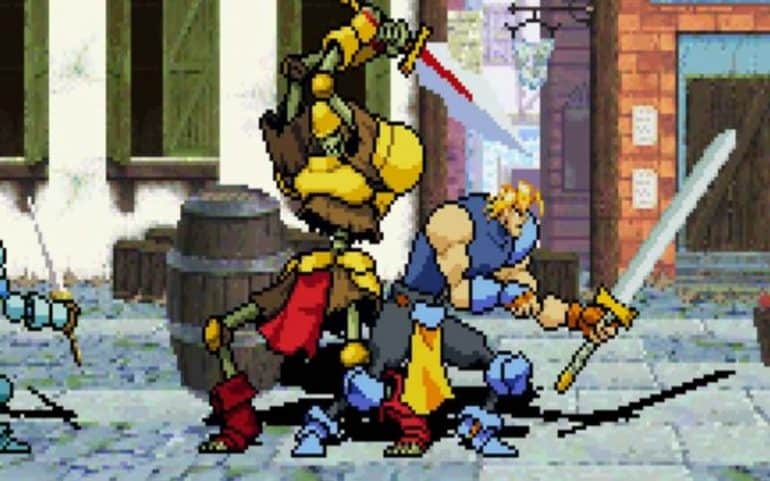 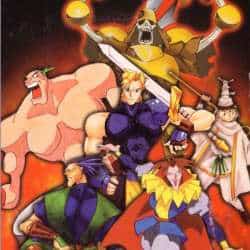 The Sega Saturn had some absolute gems released on it during its three year life in the UK from shoot em up’s like In The Hunt to arcade classics like Daytona USA.

There is one game on the mighty Saturn that has now become legendary and may have been missed by many and that game is Guardian Heroes.

Guardian Heroes is a 2D side scrolling beat ’em up from Treasure and was released in 1996 as a Saturn Exclusive. and plays like a pumped up Streets of Rage.

It is a stunning game that takes full advantage of the Sega Saturn’s amazing 2D graphics abilities that even the more popular PlayStation couldn’t even come close to matching.

Guardian Heroes has a medieval/fantasy setting and you can choose between one of six characters to use on your quest to defeat the evil wizard Kanon and his hordes of subordinates which include Wizards, Robots and even plants.

After battling one of Kanon’s bosses with a special sword, it gets struck by lightning and out a burial mound appears a zombie Knight who then aids you on your quest where you can give it commands to go bezerk on everthing or defend you as you battle with an insane amount of enemies onscreen.

The amazing thing about Guardian Heroes is that it has a branching story line and multiple endings so you can choose where to go next and with that change the story giving a huge amount of replayability and will have you coming back for more for a long time.

Guardian Heroes: A Work of Art

Everything about Guardian Heroes is stunning throughout. It’s pixel art heaven on par with the Neo Geo classic Metal Slug.

Starting with the Anime intro you get a sense of what’s to come and when you start the game where you get to choose your stunningly detailed and animated characters to battle with.

The backgrounds throughout the game are beautiful, all hand drawn and full of small details from towns and forests through to crazy underworld-esque locations.

The attention to detail is mesmerising and is testament to Treasure for their ability to squeeze so much out of the Saturn’s dedicated graphics chips and processors which was always known to be a hard system to develop for.

The enemies are hugely varied and you’ll be amazed at how many of them are on screen at one time and some of them are huge, taking up nearly half the screen and whilst there is a little bit of slowdown now and again you’ll be too amazed to notice it although you may find it helpful when the action gets manic.

Special mention has to go for the soundtrack and sound effects as well.

With a mix of orchestral and rock tracks, it has an old school sound that is timeless and perfectly suited to the game. If you love it like we do you can play the tracks on a stereo (after skipping track 1).

The sound effects are brilliant too with lots of smashed, crunching and slashing sounds that you’ll hear a lot.

Honestly when it comes to beat ’em ups Guardian Heroes is up there with the very best.

The action is intense from the outset and the sheer number of enemies that can be on screen is a feast for the eyes.

No matter who you choose to play as, each character has their own abilities and special moves from massive combo attacks to casting spells that take over the whole screen and cause massive damage and of course the Zombie Knight which you can give commands to helps out massively.

Outside of the main game if you have a multi-tap you can battle up to six others players locally in arena combat and because you have swords and other weapons its like a multiplayer version of Samurai Shodown in its own way.

Its fun for sure but it’s all about the main story driven game but its good to see this as an extra for players to have a blast with.

After each level is completed you can increase your stats just like an RPG giving you more power and strength and even things like luck which comes in handy against poison attacks from some of the bonkers creatures you go up against.

Is Guardian Heroes Worth Playing Today?

Guardian Heroes is not only stunning but one of the best side scrolling beat/hack ’em ups out there.

It’s like the very best moments of Streets of Rage combined with Golden Axe and then some!

As a Saturn game it demands to be in any collection and the prices out there for it will tell you this is a must have game.

It’s both bonkers and beautiful to see and play.

Other Systems Guardian Heroes is on?

For an updated version that adds HD graphics a fantastic version was released in 2011 on the XBOX 360 which plays just the same although it’s still great with Saturn control pad rather than the larger XBOX one.

For those on the go Guardian Heroes Advanced is also available on the GameBoy Advance and is good fun to play too but nothing beats the original Sega Saturn version.

Overall Guardian Heroes is worth the money and if you can get hold of it for a decent price a worthy investment that you’ll not let site there.

It needs to played and you’ll have a great time doing just that.

What do you think of Guardian Heroes? Do you agree with our review? Let us know in the comments below.

Guardian Heroes (1996) Sega Saturn Retro Review
Is it worth playing again?
Guardian Heroes is stunning and so much fun to play. You won't regret getting this game no matter the price you pay.
Graphics
96
Sound
90
Gameplay
94
Classic Factor
93
Reader Rating3 Votes
93
Good Bits
It's one of the best looking Saturn games ever made
Great soundtrack
Tons of replay value
Bad Bits
It's expensive to buy now
93
Retroheadz Score