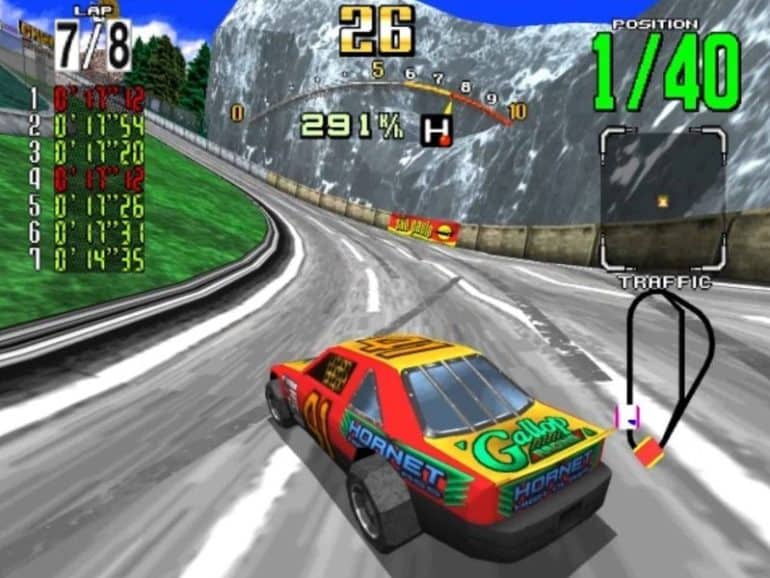 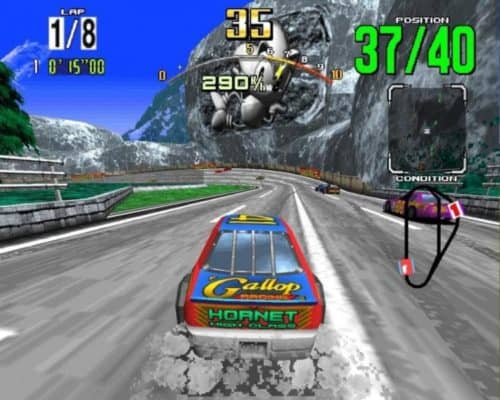 I’ll tell you right at the start of this review, Daytona USA is our highest rated and pretty much perfect game we’ve reviewed so far.

Now that that’s out of the way (and if you know the game well, you’re probably in agreement) I’ll explain why this game has never been bettered in the arcades since it first came out in 1994.

As this is the arcade version it’s the ultimate edition for starters. Yes, there was a Sega Saturn version which 20 years ago was nice to have at home but the Saturn couldn’t even begin to replicate the mighty Model 2 arcade board which it wasn’t designed to do anyway and the later version on the Dreamcast, Daytona USA 2001 was nice and shiny and had more tracks including the hilariously named RingRing Rink and more cars to use.

The only definitive home version is on Xbox Live Arcade so we do recommend getting it.

However, for the purists, there is nothing better than the original steering wheel, buttons and pedals to get you to victory lane and each of the three courses (Beginner, Advanced, and Expert) have their own unique quirks and moments that remain classic to this day.

Beginner is great as you rip along on a rolling start, you get straight into the action whether you’re playing solo or against a human rival, its action all the way.

The 40 car lineup means that you’ve got a lot of ground to cover and the quirks such as hitting the start button when the fruit machine comes up on the open stretch is a nice touch that is fun to get three 7’s in a row before you, hopefully, perform a perfect power slide around the final corner or slam your mate into a wall, either way it joyful.

The advance course though is the fun one to do solo, 20 cars, long turns and then multiple power-slide sections mean that you’ll want to ditch the automatic transmission and get good at manually changing the gears as this is where you’ll get the most out of it as you hurtle along at 325 km/h. The last corner is a pig sometimes but when you get it right it’s sheer perfection and if you’re doing well passerby will watch in awe, something you’ll never get a home.

The expert course is just plain hard, the bridge section is nice to drive along but there are some evil moments on this track and literally, you’d have to still pump quite a lot of coins into the machine to master it.

All of this is done against the clock and apart from the expert course, with a little practice you’ll easily get to the finish on the beginner and advanced courses.

If you crash which can be spectacular you will lose time and too many of these and you’re just treading water until the inevitable end of the game when the clock runs out. Visible damage will show too but it doesn’t really affect the handling too much, you’re car might wobble a bit but you’ll still hit top speed and that is all that matters!

Another nice touch that Daytona USA has is the different views of the car you can have which was first done in Sega’s Virtua Racing which came out three years earlier in 1991 and carried on in games like Scud Race in 1996. If you like it viewed in

If you like it viewed in car, you have the option, above and behind the car, no problem either and is still fun to use today and you can experiment to find the perfect driving view for yourself.

Graphically it still looks nice, yes its aged, but it’s still in lots of arcades and is always played so that says a lot for the play-ability of it.

Its bright, colourful and has the classic blue sky fell that many Sega games has by the bucket load and it’s a testament to how advanced the tech is behind it when it came out as it’s still going strong today.

However, it’s a 90’s game so take this as it comes, if it came out today it would be ridiculed but in 1994, this was beyond cutting edge!

Sound is great too, lots of speech from your pit boss telling you that ‘you’re doing great’ or the race announcer telling you it’s the final lap help drive the atmosphere of the game perfectly.

The music in Daytona USA is great too and even the game over announcement is fun and the attract mode music is what got our attention in the first place to play it and gets stuck in your head long after you’ve left the arcades.

With Daytona USA it’s all about the winning and when you come in the top three in a race you get a third person view of your victory lap and the chance to add you initials to the scoreboard.

But it’s how you get to the end that is fun part and whether you’re playing against the computer controlled cars or battling it out with your friends in its four-player linked up mode it’s just so much fun and worthy of your time, even today.

So the next time you in the arcade or you happen across Daytona USA wherever that may be, take five minutes and bit of loose change and treat yourself to the ultimate arcade racing game, if you’ve got friends with you then battle it out! you won’t regret it!

Up Next: Check out our retro review of Sega’s other classic arcade driving game OutRun

Daytona USA (1994) Arcade Retro Review
Is it worth playing again?
Graphics
90
Sound
95
Gameplay
94
Classic Factor
100
Reader Rating4 Votes
88
Good Bits
You can still find it in arcades to this day
Great fun for beginners but sublime when you're an expert on it
The soundtrack is so catchy
Bad Bits
It will eat your coins because it makes you feed it
Its old so expect screenburn and controls not working as well as they did
The soundtrack will remain with you for days
95
Retroheadz Score