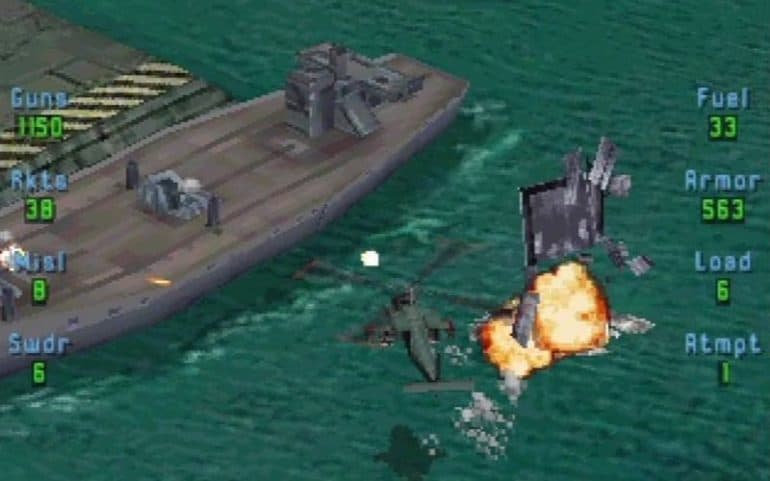 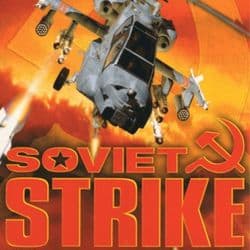 Soviet Strike is the fourth game in the much loved ‘Strike’ series which started in 1992 with the epic Desert Strike.

The game published by EA came out in 1996 and was the first game in the series to come out on the 32-Bit platforms. Retroheadz boots up the Sega Saturn version of Soviet Strike to see if it’s worth playing again today.

What’s The Story in Soviet Strike?

The USSR is no more and the and a large region has been taken over by a rogue Ex KGB General going by the name of ‘Shadowman’ who’s up to no good.

The US defense department activates it STRIKE team, a covert group who’s job is to stop wars before they start and this is where you come in as the pilot of an Apache helicopter to thwart his ambitions and save the day by stopping an invasion of Europe and sees you do a grand tour of Easter Europe and Russia, the Black Sea and finally Moscow itself to stop a coup from happening.

Just like previous Strike games the game has many cut scenes to drive the plot, however thanks to the power of Sega’s 32 Bit machine its full motion video instead of graphical cut scenes that keep you up to date with what’s going on.

Soviet Strike ups things from the Mega Drive’s outings and introduces a heap of new characters who help drive the story and provide intel about upcoming operations. It’s contemporary and is a cross between CNN and MTV in its execution with fast cameras and angles that keep your attention and adds value to the proceedings.

The acting is done well and is a standout from the era of bad FMV games.

As this is a continuation of the series we all know and love the star is the Apache attack helicopter that you get to pilot throughout.

Unlike Jungle Strike and Urban Strike which had multiple vehicles to use and even on foot sections, Soviet Strike goes back to it’s Desert Strike roots and simply gives you control of the Apache throughout.

The usual weapon load out remains, with a chain gun, Hydra rockets and Hellfire missiles being the main weapons although the Saturn version has some secret extras including twin guns and Maverick missiles which like picking up the super fast winch in Desert Strike you need to find in-mission to use.

Controls of the Apache in Soviet Strike are similar to previous outings too, the main difference is a more overhead rather than totally isometric viewpoint which is different but not annoyingly so.

Missions in Soviet Strike follow a similar format to previous games, with the takedown of Radars, Power Plants being the starting parts of the large levels and then you get to do the heavy stuff after that such as prisoner rescues and rescue missions.

The levels are varied along with their locations and the usual strategic elements remain such as finding fuel and ammo which in this game are much harder to do.

Yes there are ammo crates and fuel locations on the map, however from the outset its clear that your going to need more than what’s available so you’ll be spending quite a lot of time just trying to find the hidden caches by blowing stuff up and hoping they are there in the rubble.

Whilst this part of the game is what made the series more of thinking person’s game it get frustrating quickly and feels like its mostly what you spend your time doing and this leads on to the difficulty of the game.

One of things that stops Soviet Strike from classic status is its difficulty.

Soviet Strike’s AI is hard as nails from the outset and whilst initial parts of the game are easy to achieve it soon get hard and massively so.

The game almost feels unfair in its relentless pursuit of ending your fun and whilst this is more realistic, as was the probable intention, you’ll get frustrated pretty quickly if your having a casual play so you’ll need to put the hours in to master it and even then it has too many moments that frankly feel unfair.

It’s not to say its not a good game, it’s more that the savage difficulty stops it from being a true classic like its forebears. Getting hit from small arms fire to big calibre rounds seem to be much harder to dodge than previous outings.

The graphics are quite grainy and the low resolution polygon graphics hinder you a bit as the game relentless pace make it hard to keep up with what’s going on in places.

The graphics while good for the time haven’t aged well really, they are what they are but there are too many moments of wondering who is shooting at you and sometimes its hard to even differentiate between the background and enemies.

Sound wise you get the classic chopper sound and there’s background music which does distracts you from the mission and doesn’t help alleviate the difficulty in any way and the sudden volume jump in volume in mid-game cut scenes will make you jump out of your skin even when you know its coming because you probably died again and are redoing the mission.

Soviet Strike whilst being far harder from the outset of previous Strike games is a good game, its missions are long and varied.

If you like a challenge then this game will be one for you. For more casual retrogamers its one that you’ll probably give up on sooner rather than later and that’s a shame but we wouldn’t blame you in the slightest as the difficulty is the main thing that lets it down.

Apart from that it is fun and the fact that you can blow pretty much anything that stands out from the background up would be a big stress reliever if it wasn’t for the savage difficulty that it would sit there alongside Desert Strike as an all time classic.

Soviet Strike Sega Saturn Classic Review
Is it worth playing again?
For those that love the Strike series of games, Soviet Strike is worth a revisit, however, for casual players expect to die a lot!
Graphics
78
Sound
82
Gameplay
88
Classic Factor
90
Reader Rating4 Votes
86
Good Bits
Huge levels and you can destroy pretty much everything
A big step up from the 16 Bit Strike games.
Bad Bits
It's so hard but not in a good way
Grainy graphics on modern TV's make it hard to see what's going on sometimes
85
Retroheadz Score