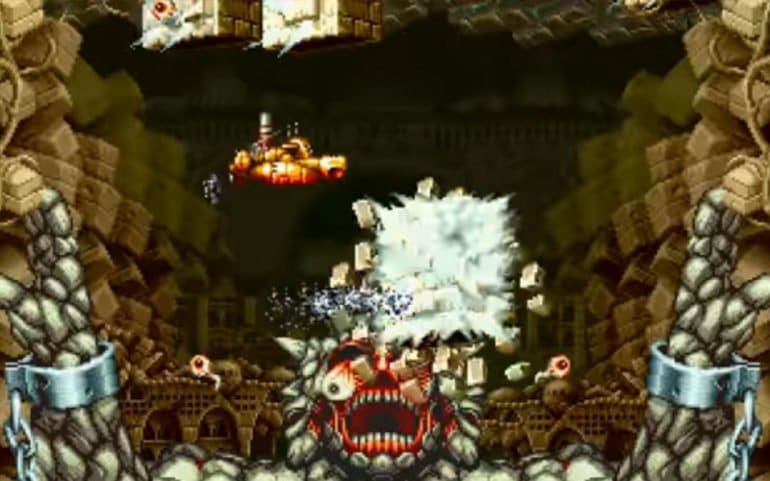 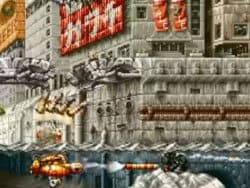 In the Hunt is a rarity in the world of Shoot ’em ups, for once your not in some hyped up space vehicle.

For once,  the action takes place in a submarine.

Whilst this may not sound as frantic and fast-paced as the usual space based side scrollers that any fan of this hectic genre adores, it really is a completely bonkers and beautiful looking game.

In The Hunt is one that fits in perfectly with the Sega Saturn main attributes, stunning 2D graphics and its from Irem, the creators of R-Type and SIMS Co and originally hit the arcades in 1993.

The game itself looks amazing, even after all these years, it still shines with it chunky 2D visuals.

The animations of your sub, torpedoes and missiles looks great still, its definitely a feast for the eyes and its pretty much arcade perfect.

Being underwater you’ve got a lot of enemies to dispatch from enemy submarines and mines that are there to hinder your progress through this challenging game.

The action hardly ever lets up and its not just underwater too, you can break the surface and shoot down jets, choppers and sink surface ships.

The attention to detail in this game is insane.

From the backdrops to the way the enemies, and frequently your sub implodes just like you see in the movies when subs go bye bye and the surface explosions will remind you of Metal Slug on the Neo Geo.

Up for a challenge?

Regarding the challenge of the game, yes, its hard as many hardcore shoot ’em ups inevitably are.

In the Hunt is one that will take a lot of mastery to complete but that’s part of the allure of these types of games isn’t it? The Challenge is everything. If its looks great too then that’s a bonus.

The bosses on the game are pretty mental too, from your standard sub and land based weapon systems to dispatch, one of the most iconic is where you face-off against a giant humanoid mech that spends its time throwing things at you from above, as you rise up you need to time the hits  as you slowly rise up through the chasm its in.

You need to see it to believe how good it looks.

The soundtrack suits the atmosphere perfectly and the sonic overload is throughout including the sound FX which provide a crunchy and satisfying accompaniment to the action that unfolds all around you with muffled explosions and implosions that confirm that yes, you are indeed underwater and the sonic overload accompanies the intense action perfectly.

Is In The Hunt worth your time?

Given that In the Hunt is an arcade port, it definitely feels at home on the Sega Saturn and given at the time it was probably overlooked by many people because it was 2D.

It’s well worth hunting down and taking on and whilst it does suffer from slowdown when the action gets intense, you’ll be thankful for it.

It’s not just for the let up in the action but also to see everything running in slow motion so that you can truly appreciate how beautiful In the Hunt looks.

Getting In The Hunt

With regards to getting hold of In The Hunt, you’re only real option are places like eBay.

You can also get it on the PS1 but the Saturn version is superior due to the extra firepower Sega’s powerhouse console has in regards to 2D visuals.

It had so many shoot ’em ups on it for this reason.

The only other option is MAME for the original arcade version but if you are a collector this is definitely one to get.

It will cost a bit though but it will be one to treasure.

More importantly, In The Hunt is not one to just look at on the shelf but also to play because it will hook you in from the moment you start to play it.

Your views on In The Hunt?

What do you think of In the Hunt?

Add you score below and give readers your review of this classic Sega Saturn game if you want?

In The Hunt (1996) – Sega Saturn Retro Review
Is it worth playing again?
Utterly stunning, fiendishly challenging and worthy of the best submarine game ever made in our opinion. Get it if you love shooters.
Graphics
92
Sound
86
Gameplay
88
Classic Factor
84
Reader Rating9 Votes
89
Good Bits
It looks stunning
If you like a challenge you'll love it
Bad Bits
There's slowdown when it gets hectic
3D intro looks incredibly dated and out of place
88
Retroheadz Score