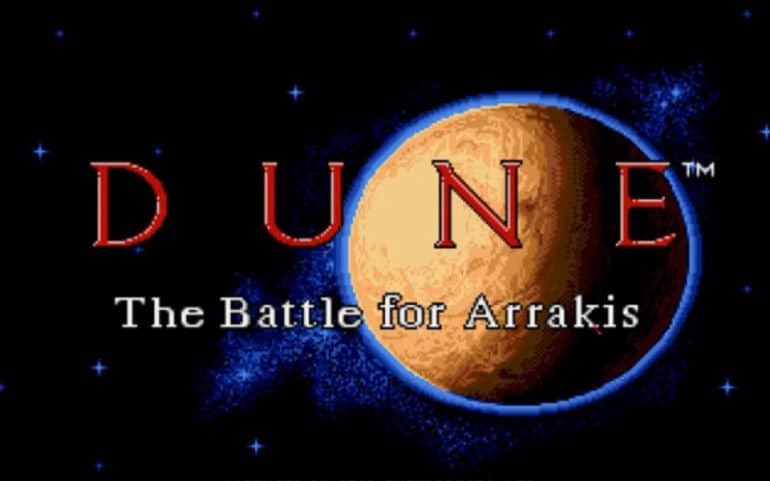 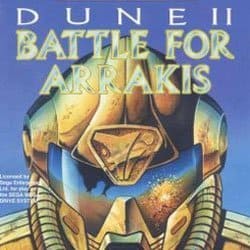 Whilst the Mega CD had Dune the fantastic adventure strategy game based on the original Frank Herbert books and tied in with the 1984 David Lynch Dune Movie which was epic in its story and gameplay.

The Megadrive had Dune 2: The Battle For Arrakis which was created by Westwood Studios (the people behind Command & Conquer).

Dune 2 was published by Virgin Interactive back in 1994.

This game holds a special place on Sega’s Megadrive as it the only traditional real time strategy game to come out on the 16 Bit console.

Dune 2 takes place on Arrakis, the only planet where the Spice Melange comes from.

Spice is a drug that helps humanity navigate the cosmos with the help of the Guild Navigators.

Players get to select one of three factions.

Each of which are tasked by the Emperor to take control of the planet and be the main supplier of Spice.

The three factions on offer are House Atreides, their main rivals, House Harkonnen and the insidious Ordos.

Each faction has unique units and super weapons which are accessible later in the game.

These include the awesome Atreides Sonic Tank and the Harkonnens massive Devastator Tank.

There are also moments where attacks happen from a purple coloured enemy, this is the Emporers crack Sardukkah troopers.

They are more of annoyance and can be dispatched of pretty quickly though.

To fund weapons and progress, Dune 2 has the ultimate currency to pay for planetary domination.

Spice is the currency of the Dune universe so that’s what has to be harvested to build facilities and weapons.

Look out for giant Sandworms as they can eat Harvesters so make sure they are protected when one is in the vicinity.

If you see a raised circular bump and shoot it, it will release loads of Spice for you to mine which is handy if resources are low on the map.

No RTS would be complete without super weapons and Dune 2 has these too.

From the Atreides dropping in their Fremen Allies to cause havok on enemy bases to the Harkonnen firing a cluster missile at your base.

Players need to be ready to mitigate damage and repair their base quickly on the later levels.

As with all super weapons it won’t win the game but they can do some serious damage.

The damage is amplified if a follow up tank assault is done straight after.

Dune 2 is helped along with loads of sampled speech in game and has cut scenes in-between levels where the house Mentat briefs players on what’s expected next.

The music while limited is a nice background accompaniment and does it job and when a mission if complete, expect fanfares.

Compared to modern day RTS games it may seem a bit archaic but put some time into it and the hours will fly by.

Each faction has 10 levels each so it will keep players busy for quite some time.

The only gripe is that its impossible to select multiple units together so there’s lots of back and forth across the maps.

In a nutshell, the Megadrive control pad isn’t the best thing to use for this.

With that aside it’s a long game and if players set aside it’s limitation compared to modern RTS games it makes for an enjoyable game.

Fans of the genre will find Dune 2: The Battle For Arrakis is an interesting addition to any Megadrive collection among the plethora of Shoot ’em ups and platform games.

Do you remember Dune 2: The Battle For Arrakis?

What’s your memories of this classic real time strategy game?

Let everyone know in the comments below. and don’t forget to add your score in the summary below.

Dune 2: The Battle For Arrakis (1994) Megadrive Retro Review
Is it worth playing again?
Dune 2 is great fun. It's a long game that will keep you busy although it naturally has limitations compared to modern day RTS games. One for fans of the genre and collectors alike.
Graphics
60
Sound
72
Gameplay
83
Classic Factor
84
Reader Rating9 Votes
80
Good Bits
Dune 2 will keep you busy for quite some time
Great presentation throughout
Bad Bits
Graphically it looks dated
The Megadrive pad is not the best way to play RTS games
75
Retroheadz Score