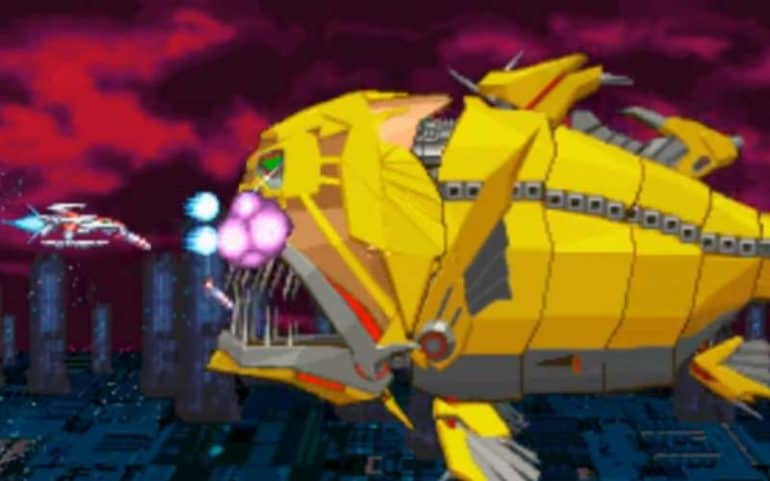 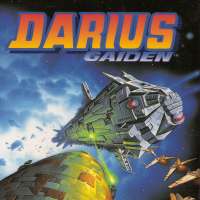 Darius Gaiden is a side scrolling shoot ’em up that first came out in the arcades in 1994 and then subsequently made it to Sega’s 32-Bit Saturn in 1995 and was published by Acclaim in the UK and US.

The game is regarded as one of the best Darius games out there but is it worth playing today?

The Darius star is dying and lots of refugees make it to the planet Vadis where they begin to set up anew.

However, the Belser army finds them and launches a surprise attack on the spaceport of Vadis and kill pretty much everyone.

A fleet of Silver Hawk attack craft go to repel the invaders and get wiped out leaving only two left and this is where you (and a mate) come in to take the fight to Belser.

The intro really is great to watch and gives the game an almost desperate sadness and melancholy that really compels you to get revenge on Belser.

Before commencing the game players are treated to the usual options screen and then its straight off to shoot the heck out of everything that comes in the Silver Hawks way.

Luckily, power up’s are available along the way with Red shields giving you extra guns, Green shields give more shields and Blue ones ground weapons like bombs.

The Silver Hawk fighter also has three smart bombs which open up what looks like a tear in space and lightning that fills the whole screen and sucks in enemies or seriously damages the bigger ones.

The temptation to use these a lot is high because it looks awesome so try and use some restraint until the bosses arrive.

Although the smart bombs comes in handy when things get a smidge hectic and by a smidge we mean a lot as the attack waves come from all directions.

Something Fishy Is Going On

Darius Gaiden’s bosses are spectacular to see and do battle with.

At the end of each level you get warned that a huge battleship is approaching and many have bizarre and sometimes funny names like Golden Ogre and Fatty Glutton.

One thing they have in common is they are all aquatic based and this is what generally sets the Darius series apart from the usual spaceship bosses on other game.

The difference is these are now polygon based and still look fantastic to go up against today especially the opening level’s boss, Golden Ogre and the final boss on Level V being just two examples.

One thing that helps the game’s replay value is the branching system in play on Darius Gaiden.

Think OutRun or Starwing as the levels branch out after the first mission and you get to choose your course.

The ending is still the same the way to get there isn’t and this gives players lots of ways to beat the game.

Darius Gaiden really delivers in the graphics department and really shows off the Saturn’s abilities well.

The game has a huge amount of detail from the ship you are flying to the detailed and varied backgrounds and some levels showcase the Saturn’s transparency and scaling effects to good effect.

The variety of enemies to vanquish is impressive and the graphics on general are bright, colourful and bold.

A Night At The Opera

Shoot ’em ups usually have some kind of rocking soundtrack to accompany the chaos on screen, however, Darius Gaiden takes a different approach.

Gone are the high temp tracks that give an adrenaline rush and instead its filled with brooding Operatic masterpieces that emphasise that desperate sadness that I mentioned earlier.

It’s a sonic masterpiece in the main and one that will stay with you for some time afterwards.

It’s different and it works on this game exceptionally well and has stood the test of time well.

The sound FX however, are chunky and intense and are satisfying throughout.

Is Darius Gaiden Worth Playing Today?

If you love shoot ’em ups or are just starting out on collecting for the Saturn then this is a must have.

Darius Gaiden looks and sounds amazing and it’s backed up by some intense, reflex testing game play that never gets old.

The game has tons to offer players and whilst it’s not cheap to buy anymore you’ll be glad you have it in your collection.

If you don’t have a Saturn or can’t stomach playing the price it’s going for and have a PS2 lying about then it comes on the Taito Legends 2 compilation which can be had for under a tenner on eBay.