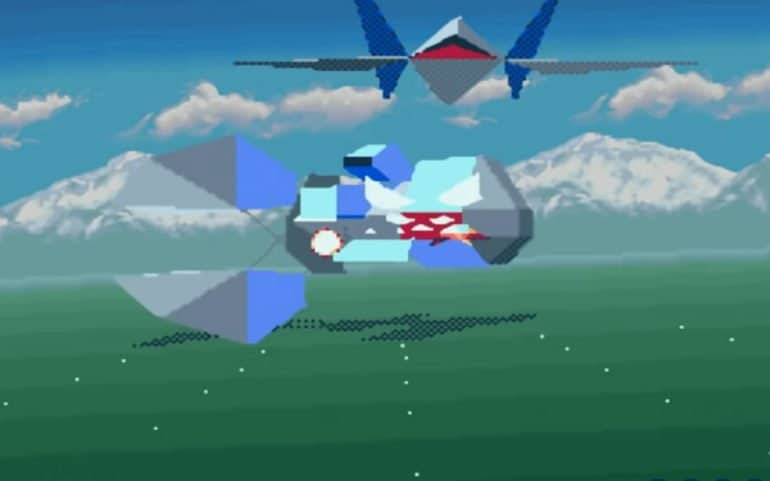 Back in the early 90’s 3D games were the domain of either the arcades with titles such as Sega’s Virtua Racing and Namco’s Starblade or on the home computers such as the Amiga had with Epic, Robocop 3 and Birds of Prey to name a few.

However, 3D polygon grpahics were hard to do on the SNES at the time.

Whilst the SNES wowed everyone with Mode 7, the pseudo 3D graphical effect, it still didn’t have true 3D graphics with those must have polygons that were in demand and destined to be the future of videogames.

With that in mind,  UK based developers Argonaut worked together with Nintendo to come up with the Super FX chip.

This special chip was the much hyped and eagerly awaited upgrade to the SNES’s capabilities and with that they needed a killer app.

The killer app was Starwing.

Starwing (or Starfox for the rest of the World) follows Fox McCloud and his rag tag team of pilots as they do battle against Andross.

Andross, the Ape like enemy is hell bent on invading Cornelia and most of the universe where the game is based.

You take control of Fox in the Arwing, a 3D spaceship that goes up against the hordes of enemies that Andross throws at you as well as some awesome looking bosses that still impress today given the tech its on.

Starwings presentation is still pretty slick to this day given what its running on,.

The moody intro darkly setting the stage for things to come and its gloriously backed up by the unique sound that the SNES has.

It sets the stage for things to come.

On starting the game, players get to fly the Arwing around before the action begins.

Whilst its fun for a couple of minutes today most gamers are used to this control system now so skip away and get ready for the lovely 3D launch of the game.

Again, the intro to the start of level one is for modern gamers probably taken for granted and nothing special

However for old gamers it still evokes the awe that was felt back in 1993 when seeing sequence this for the first time.

Playing Starwing is still great fun, the missions are on rails.

Starwing doesn’t give a true open world 3D experience, that came later on in the N64 sequel

That aside, Starwng is a solid shooter which has some nice surprises and touches throughout.

Choosing the route you take after the first level much like games such asTaito’s Darius series does is fun.

Starwing still looks and feels unique and hold up incredibly well today if you forget about the graphics that today’s games can offer for a moment.

And yes, it’s still fun to do barrell-rolls as it was back in the day too.

Starwing’s bosses are the icing on the Super FX cake when it comes to wowing gamers.

The first boss, whilst a doddle is huge and foreboding although its nothing compared to later bosses

Our favourite has to be when you enter a giant Starship and fly through it to reach the core.

It’s like the end of Return of the Jedi!

This moment was pure awe back then and it still is when you see it as it really does make you wonder how they managed to get something of this magnitude to work so smoothly on a SNES.

Starwing is a tough game to master, you’ll get reasonably far to begin with but the later bosses can and will make you try and try again until the inevitable final boss which is Andross himself chews you up and spits you out.

Good luck is indeed needed but its worth soldiering on not just for nostalgia’s sake but for the challenge and reward of beating this absolute gem of a game.

Is Starwing worth adding to your collection?

Starwing is a stunning game, from the presentation to the way it plays.

The variety of levels and just the design of the game make is a classic that deserves to be in any serious SNES collector’s library, it’s that simple.

The good news is that you can pick it up for the price of a city centre pint.

The only difference is the joy and refreshment lasts a lot, lot longer.

How much did you love Starwing. Were you hyped up for its release? Share your thoughts on Starwing/Starfox in the comments below and add your score in the review summary.

Starwing (1993) SNES Classic Review
Is it worth playing again?
Starwing is an absolute classic for the SNES and a pivotal moment in gaming. It's worth picking up and playing again and will be long in to the future.
Graphics
82
Sound
83
Gameplay
84
Classic Factor
91
Reader Rating6 Votes
92
Good Bits
Still plays great today
Impressive for what its running on
Bad Bits
Don't expect a walk in the park, its challenging
Your co-pilots are a bit useless
85
Retroheadz Score