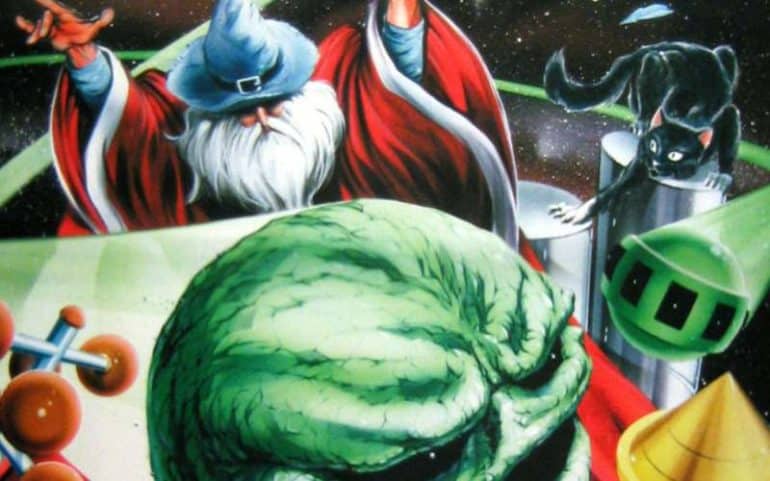 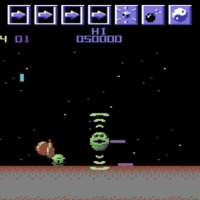 Wizball is a unique shoot ’em up that came out in 1987 and was coded by Sensible Software and was published by Ocean. Wizball came out on the Commodore 64 first and was also available on other 8-bit home computers as well as the then new 16 Bit machines including the Amiga and Atari ST.

The background to Wizball is that you play a wizard who lives in Wizworld.

Unfortunately, the evil Zark has stripped the world of colour and its up to you with the assistance of your cat called Nifta to restore the colour back this once vibrant world.

To do this players need to take control of Wizball and get Nifta to control the Catellite sphere and take the colour out of streams of enemies throughout the levels.

It means that collecting the green icons, that have a resemblance to Sergeant Major Zero from Terrahawks is paramount from the start.

Once you gain more control you need to get more spheres and with this come extra weapons including lasers and most importantly the Catellite.

Catellite is a smaller sphere (controlled by Nifta the cat) that follows you around and can automatically attack and collect the coloured droplets you need to progress through the levels.

Once enough Red, Blue and Green is collected you fly back to your Wizardly lair and mix the colours back in to the world and each time it gets harder as the game progresses.

There is also a party element to the game with up to four players taking turns on the joystick too.

The game has a unique feel and vibe to it and with it comes a strategic element that means that if you want the Catellite to destroy enemies and to collect the coloured droplets then you need to leave Wizball alone and this vulnerability has a high risk/reward level attached to it.

It’s vital but will also raise players blood pressure and therefore timing has to be right otherwise Wizball will get hit and explode in a cascade of pixels.

Luckily, the wizard can collect upgrades on the fly such as shields that can help mitigate the stress of failing although it can be even more tough once you have to start on a later levels with hordes of enemies flying around and you desperately trying to get upgrades to even the odds again.

Wizball’s graphical style is also quite unique with large clearly defined and chunky sprites along with a nice mixture of enemies to vanquish as the game progresses.

The backgrounds are interesting with what look like otherworldly depictions of things like Mount Rushmore and strange stalactite formations and industrial-esque sections to manoeuvre around.

The space based race back to the lair is great to look at as is the lair itself with the Cat drinking milk from a bowl while the wizard mixes things in a cauldron.

All in all the look of the game is spot on and feels like something that seems timeless and different enough to stand out from all the other shoot ’em ups that have called the Commodore 64 their home.

The sound on the game is amazing. The soundtrack was written by the legendary 8-bit composer Martin Galway and fits the game perfectly.

From the electric guitar solo from heaven sounding intro to the otherworldly music in between levels the music whilst not in the main game itself is great in that classic SID chip way that only the Commodore 64 can provide.

Sound effects are paramount throughout and shooting sounds are high pitched and rewarding.

Special mention has to go out for the low pitched doom laden sound when travelling through pipes to get to the lower levels which just sounds awesome!

Is Wizball Worth Playing Today?

Wizball is a unique game that deserves a replay if you have the means to. It’s difficult and hard to master and you will get frustrated but for sheer nostalgia and to play a fun and exciting game that still cuts it today is well worth doing.

In fact we’d love to see a modern day version of this iconic shooter. What about you?

Wizball (1987) Commodore 64 Classic Review
Is it worth playing again?
Wizball is fun, frantic and really unique. For sheer nostalgia alone it worth going back to and those who want to pay a piece of gaming history its an enjoyable blast.
Graphics
79
Sound
81
Gameplay
83
Classic Factor
88
Reader Rating6 Votes
92
Good Bits
Unique look and feel throughout
Bad Bits
Gets difficult
83
Retroheadz Score