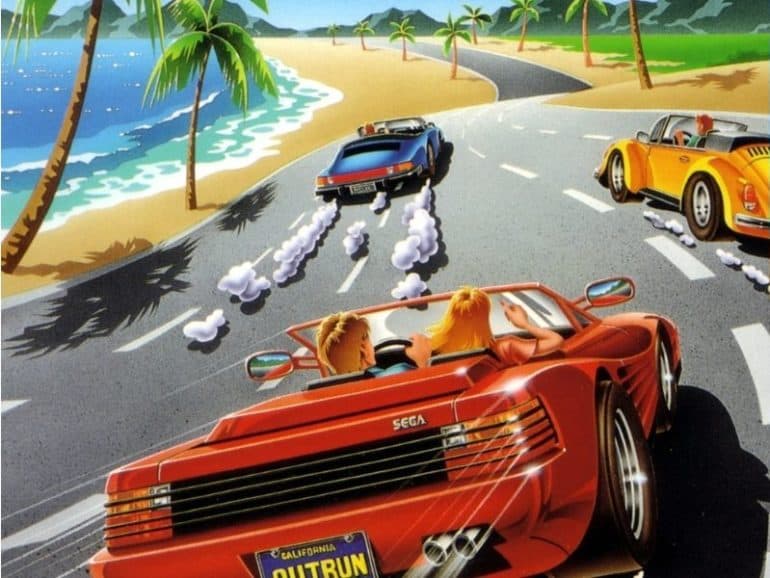 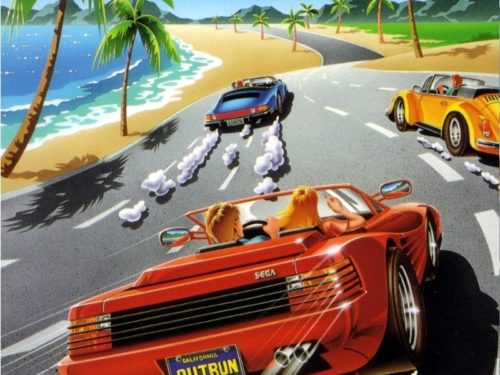 Outrun was (and we reckon still is) the ultimate expression of open road freedom when it first came out in 1986.

Sega’s grand touring  homage to driving coast to coast is not only an amazing experience to behold back then its cultural significance gets stronger as the years go by.

Choose Your Own Road

Why? you might ask is a driving game from 1986 held in such high regard?

Well, it all stems to the fact that Outrun was the first arcade driving game and in fact, any driving game at that point that gave you choices.

It’s just you, your blonde haired girlfriend, an iconic open-top Ferrari Testarossa and the open road that you had to contend with against the clock.

This game meant driving not only fast but smart, using the brake does actually mean that you will get to the checkpoint quicker than just hammering it down the gorgeous, sprite scaled roads that meander and winding across a constantly changing calypso summer landscape.

From the start of the game you are given choices, which soundtrack you want.

Who can forget the timeless Magical Sound Shower, Splash Wave and Passing Breeze tracks that perfectly match the hazy, lazy summer landscape that you happen to be powering through at 290 KM/H.

Who wouldn’t want to experience this in real life? OutRun might not be able to be done for real but right here, right now you got to be the lucky person to experience it.

The game starts off at the starting line where you are waved off the start from the crowd that is around you to see you on your way.

The fact that your car spins itself on to the start line set the tone from the outset that you’re about to have the ride of your life.

You then speed off and change gears rapidly from low gear up to high gear to propel yourself along the beautiful Coconut Beach with its blue skies and palm tree obstacles to the next stage whereupon you’re given a choice; go left for an easier ride or go right for a more challenging, hazardous and perhaps more endorphin releasing joyfulness that OutRun evokes.

The stages cascade out in a reverse pyramid so that you can take multiple routes to one of the five different endings that will take lots of practice and plenty of change to reach.

Each route gives a different landscape to run through and this could be desert, woods, mountainous or coastal based locales, each one bright and bedecked with obstacles and traffic that will get in your way to attempt to stop you from reaching the chequered flag and one of five separate endings that are humorous and rewarding to watch.

You also get a stack load of points upon completion with the amount of time left being added on for extra points that put you way up on the machines leader board because that what it was about back then.

Your initials on the days’ games beating all rivals who like you were trying to be the best.

Everything about this game is amazing and even though it’s now 30 years old (pinch yourself and ask where has that time gone since you first played it) it still looks and plays great today, if you can find a machine that not in a private collection as its going to be hard to find one in an arcade now.

So How Can You Play OutRun today?

OutRun was so popular that it was literally converted to every home format possible.

If you have a Mega Drive then you do have a good version to play there, its not arcade perfect but its good none the less.

The ultimate retro way to play it now is to get it on Sega Ages Vol. 1 on the Sega Saturn which is a great conversion and awesome to play on the Sega Saturn’s 3D pad (the precursor to the lovely Dreamcast gamepad) or on MAME emulation.

Failing that the Nintendo Switch is good value at £5.99.

Either way, you’ll have fun playing this culturally significant driving game that changed everything about driving games, both in the arcade and at home and even became the namesake of an electronic musical genre stuck in the 80’s but made today. That’s how much it’s inspired people.

Sega struck gold with OutRun and so did every gamer out there who played it and you owe it to yourself to hunt it down and play it to death or at least get it on one of the systems mentioned above.

You won’t regret it!

OutRun (1986) Arcade Retro Review
Is it worth playing again?
OutRun may be 30 years old now but it's still a fantastic game to play. Go hunt it down and give it a go or play it on one of the numerous home systems (ideally the Sega Saturn) it was released on.
Graphics
93
Sound
95
Gameplay
90
Classic Factor
98
Reader Rating3 Votes
81
Good Bits
The Soundtrack
Looks amazing, even now
Bad Bits
That little two second delay when you crash your car, so frustrating
OutRun stole all your pocket/lunch money because it was too good
94
Retroheadz Score