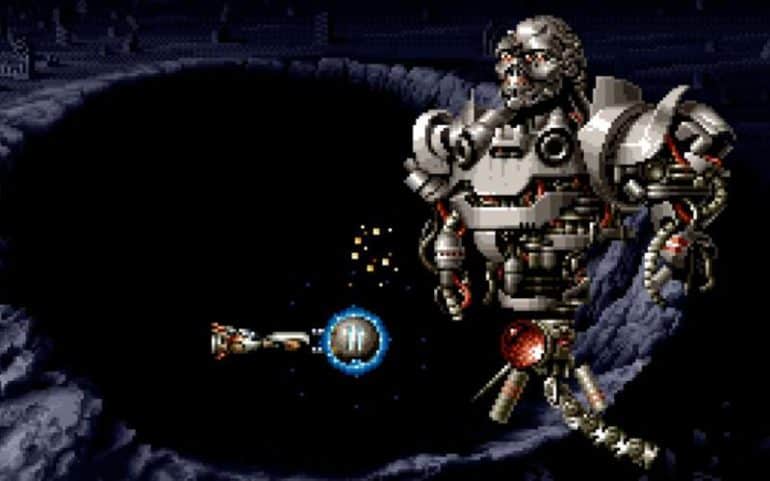 The Neo Geo is home to some amazing shoot ’em ups that showcased the power and graphical capabilities of the arcade perfect home console.

Everything about the Neo Geo was bigger, badder and better than its home based rivals like the Mega Drive and SNES and one area where the machine excelled at alongside the flood of beat ’em ups was with shoot ’em ups.

So, which ones are the best and most fun to play today? By that we mean have they aged well and do they stand up to today’s gamers?

Here’s the Neo Geo shoot ’em ups to try out whether that’s on the original hardware if your a purist and have very, very deep pockets, emulation or on current consoles like the Switch and PS4 where you can pick some of these up for pocket money prices.

One things for sure if you like challenges and want to hone your reflexes then these challenging and stunning classics are worthy contenders for your attention.

The exotically names Andro Dunos is crisp and colourful and verges on being a cute ’em up but if you think this game will be a breeze, think again!

This early Neo Geo shoot ’em up is one giant credit muncher that will test you to the maximum throughout with its unforgiving game play but it looks so nice!

If you don’t fancy shelling out over £500 for this game then try Zero Wing on the Mega Drive as the main ships look very similar.

This stunning looking shooter will blow you away when you first play it but it is beyond challenging with awkward restart points being the main issue.

However with it’s atmospheric music and R-Type inspired game play you’ll want to keep on playing this hard as nails game.

Check out Retroheadz full review of this classic Neo Geo shooter to find out more.

Aero Fighters 2 bins the standard in-space fare and opts for real world fighter jets like the F-15, Harrier and the YF-23.

Each jet has its own firing pattern so choose one that suits your play style and when the going gets tough and the screen is full you’ll have smart bombs to utilise and clear the screen as you battle over real world cities like Paris.

It’s challenging but fun throughout and the fun bonus stages means you can level up the fire power quickly.

However its the final level that will have you enraged as when you die its back to the beginning of it with puny guns. Savage yet utterly addictive at the same time.

This Zaxxon styled shoot ’em up is unique as its set at an isometric viewpoint and looks stunning with its 3D rendered looking graphics.

When this game came out it was the most expensive game to buy on the planet at £220 back in 1992 and with that you got one of the hardest games ever as well.

This is for the hardcore who love a challenge and won’t stop until they beat the game and for casual gamers you’ll make it to the second level pretty quickly and probably give up.

Special mention has to go to the soundtrack though with its cool mixture of Rave and lounge music that go perfectly with the levels and boss battles.

Viewpoint also came out on the Mega Drive and PS1 if you want an alternative and cheaper way of playing this game.

Pulstar’s stunning pre-rendered graphics and super slick animation only add to this fun and challenging side scrolling shoot ’em up that borrows elements from R-Type and Darius and ramps them up with huge bosses, meaty sound effects and a charge attack that’s you’ll be using a lot.

This high tech World War 2 inspired vertical shoot ’em up is stunning to look at if you get a chance that is as this is pure bullet hell.

If you like the Aero Fighters series then this very similar with lots of score attack chances throughout and some gargantuan bosses to overcome.

Luckily power ups are easy to come by and there are multiple aircraft to choose from which just like Aero Fighters have different shooting patterns.

That’s Retroheadz selection but what about yours? Which Neo Geo shoot ’em up do you love playing? Let us know in the comments below.