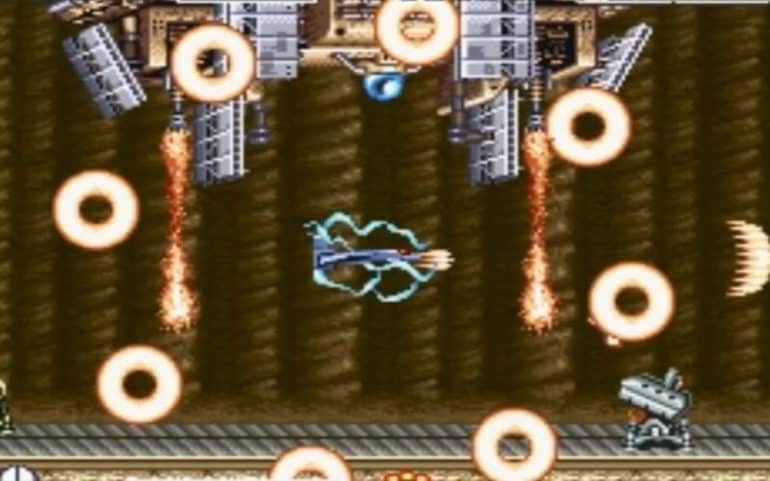 The SNES was home to some amazing games and had everything from iconic platformers like Super Mario World, Super FX enhanced classics like Starwing and a phenomenal selection of RPG’s to spend days on.

One area that the SNES also delivered well on was shoot ’em ups.

Whilst not as high profile as the Mega Drive’s selection of shooters it was still home to some classics that are well worth playing today.

Here’s our round-up of the best 2D SNES shoot ’em ups to to play fine tune those reflexes again.

Also know as Area 88 and based on the Manga of the same name, U.N. Squadron was an early release for the SNES in the UK and is absolutely phenomenal to play.

It’s got huge bosses, real world fighter jets to take control of including the F-14 Tomcat, YF-23 Black Widow and the F-8 Crusader and each has it’s own choice of weapons to buy in the quartermaster’s shop.

The bosses are epic from giant fortresses to massive battleships and land carriers.

It’s fast, frantic and fantastic to play especially with a turbo pad and is without a doubt one of the finest SNES shoot ’em ups ever released

The first two games were awesome but R-Type 3 take the series to the next level and is streets ahead of the earlier Super R-Type.

It’s fiendishly difficult but rewarding at the same time so give it some time and practice and you’ll adore this classic.

Phalanx wins hands down for the most bizarre box art ever as it has a old man playing a banjo on it instead of the super duper space fighter that’s in the game itself.

The game is pretty standard but its a fun blast and has some standout backdrops (especially the city background which is a pixel art masterpiece in our opinion and the music isn’t too bad either.

Konami were a force to be reckoned with in the 90’s and Axelay helped kickstart the SNES years for them.

From the opening Mode 7 levels to the more traditional side scrolling levels the game features huge bosses that take up most of the screen.

Axelay is a full blown nostalgia blast throughout and is a must have SNES game.

Also known as Sonic Wings on the Super Famicom.

Aero Fighters is a vertical scrolling shooter that features real world fighter jets that have unique features and serious amounts of powered up firepower.

It’s great fun to play and gets quite tricky but if you have reflexes of steel you can get pretty far and take down some of the awesomely large bosses.

It’s sequel came out on the Neo Geo a couple of years later and is even more epic.

Darius is a great series and the SNES got the aquatic space shoot ’em up treatment too.

It’s not a patch on Darius Gaiden but if you love Taito’s awesome shooter series then this one is worth a play or two as well.

The bosses are all huge and range from giant fish battleships to space turtles and even ones that take up multiple screens.

Paradius is a parady of the other Konami shoot ’em ups like Gradius and features cute and funny characters to shoot at.

While it may look cute and easy, it isn’t and is one for those that like their shooters cuter.

It looks great on the SNES and is vibrant and colourful and fun throughout and has a soundtrack that is pure cheddar!

Which classic SNES shoot ’em ups do you love to play still? Have we missed your favourite one? Let us know in the comments below.