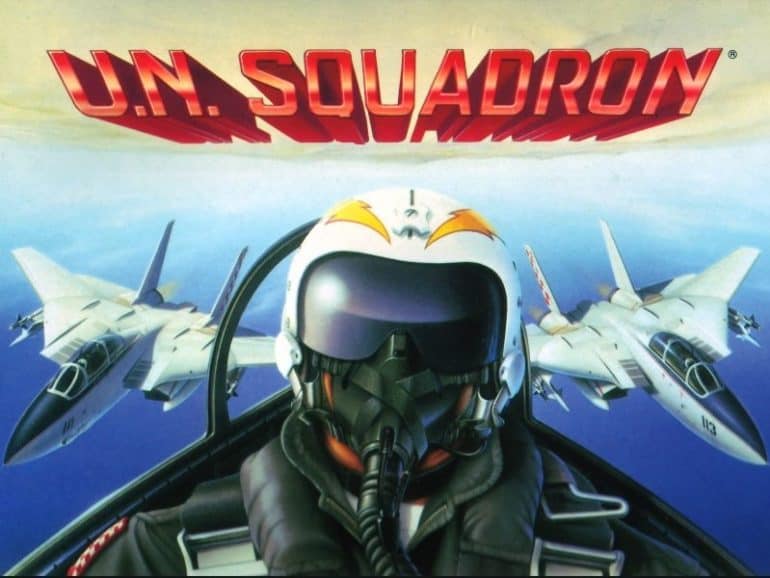 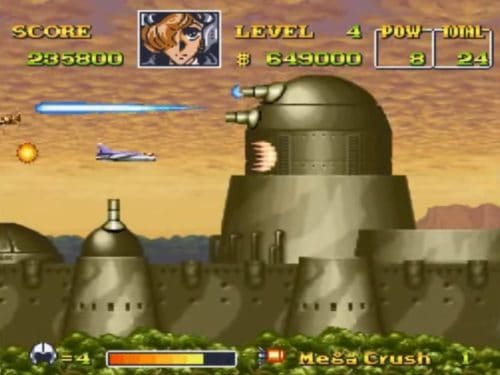 So, it’s refreshing to see one that decided to take a different route with modern planes and an earth based setting against a foe is very human in nature.

UN Squadron which was released in 1991 is such a game and still stands out as an example of one of the best shooters ever released on the SNES and probably ranks high on the list of all -time favourites that have graced any console over the years.

It’s based on the earlier arcade version and for once it’s better than its arcade parent which Capcom released back in 1989.

The story line of UN Squadron is loosely based on the Japanese Manga, Area 88.

A very popular anime series from the ‘80’s.

The setting is a fictional middle east country and you are a mercenary fighter pilot who is there to defend and attack Project K.

Project K are hell bent on taking over the previously mentioned middle east based country.

Thus begins your adventure to defeat the foe and win the war.

Whilst U.N Squadron is not the most difficult game in the world (on easy or normal anyway).

It’s a lot of fun getting through the levels and taking down the bosses.

U.N. Squadron starts off with a nice Mode 7 intro watching an F8 Crusader fighter take off from a run way and after checking the basic game options (difficulty level is the main choice here) the game starts.

In U.N. Squadron can choose one of three pilots these are:

Each pilot in U.N. Squadron has its own play style.

For example, one will recover quickly if he gets hit or can use more than one special weapon at a time.

After you’ve chosen who you’re going to be you then go to the shop to buy your weapons from your friendly neighbourhood arms dealer, Pops.

Your choice is limited based on what ship you have.

You start off with the F8 Crusader but you can upgrade to one of eight fighters both real world and fictional, more on that later.

UN Squadron starts out as a standard shooter, you have air and ground units to shoot and some will be orange in color so when you get all of them you’ll be rewarded with a power up the unit.

Collect enough of these and your main guns get bigger until eventually, you’re throwing out a stream of bullets at your foes.

It’s a nice touch that you have to buy the weapons you need for each level and patiently collect power-ups until you can get a bigger gun.

From the Sea to the Jungle

Now on to the levels themselves in UN Squadron.

They are really varied with jungles, sea and desert levels and later on in the game, cavernous bases before you take on the final boss.

Now all of this sounds pretty standard fare and it is really but it’s the bosses that await you that really stand out.

Some levels will pit you up against groups of devious stealth bombers or a supersized SR-71 Blackbird.

Other levels will have you up against multi-screen fortresses, battleships, and giant tank tracked land-based aircraft carriers.

It’s an awesome sight and one that still stands out today.

Up for the challenge?

The levels in UN Squadron and bosses do get progressively harder as you’d expect them to.

So, players will need more than an F8 Crusader to get them to the end and the options are varied both in abilities and cost.

To fund this, once a level gets completed in UN Squadron you get rewarded with a boat load of cash which can be spent on more weapons or new planes to aid progress.

Or how about an F-14 Tomcat which is the fastest jet and has mostly air based weaponry.

All are great for certain levels but none are the master of all except for the most expensive plane, the Efreet.

The Efreet is the only fictional plane and also the most expensive and has a canny resemblance to the jet that Clint Eastwood stole from the Soviets in Firefox.

It will take a lot to get there so there are some bonus levels where you can shoot up a load of delivery trucks to get an extra $20,000 a time which you will need to do.

As the last two levels are jammed packed with enemies and of course the final bosses you need to defeat as well.

Is U.N. Squadron worth your time?

Overall this game deserves your time and is frankly one of the best snes games of all time.

It one that you’ll keep going back to time and time again so it’s definitely one to get or revisit.

Considering that U.N. Squadron is one of the first batch of games to come out on the Super Nintendo it really did show the system off.

UN Squadron has catchy music, great graphics and very addictive ‘just one more go’ game play makes this a much sought after game for collectors and fans of the genre today.

U.N. Squadron (1991) – Super Nintendo Retro Review
Is it worth playing again?
U.N Squadron is utterly amazing in every way still in my opinion. It's got the looks, sound and most importantly you'll want to see it through then do it all over again.
Graphics
90
Sound
82
Gameplay
92
Classic Factor
94
Reader Rating7 Votes
82
Good Bits
It's the definitive version and looks and plays the best
Loads of planes to buy and weapons to use
Bad Bits
We wish we could have restarted it with all the power-ups in place. That would have been great
The bonus level gets a bit repetitive if you're doing it to save up for the ultimate fighter
No Autofire option so will need a turbo pad
90
Retroheadz Score