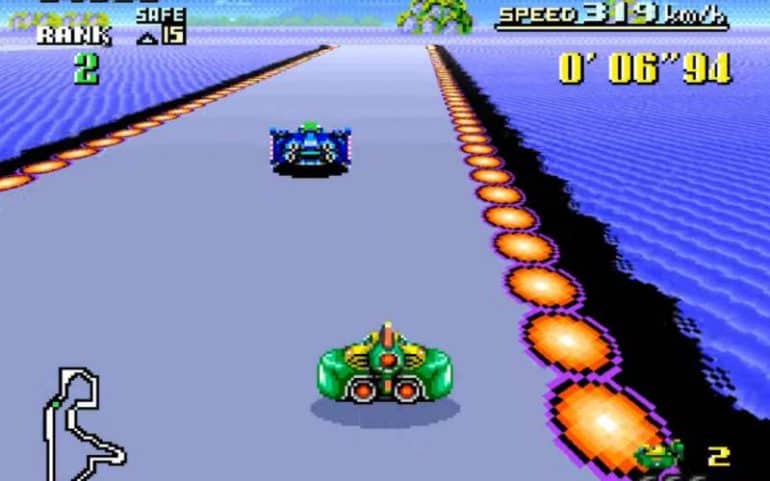 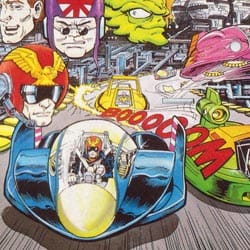 When the SNES launched back in 1990 in Japan and subsequently in 1992 in the UK, Nintendo hit gamers with a superb launch line-up that showed off the potential of their new wonder machine.

Whilst most of these launch titles were great fun, one game that still stands out today is F-Zero .

F-Zero is a racing game set in the 26th Century and gives players the chance to race across a myriad of hi-tech stages from Mega Cities to desolate wind swept landscapes.

All done in the SNES’s new pseudo 3D graphically mesmerising wonder that is Mode 7.

Choose A Vehicle in F-Zero

There aren’t too many option in F-Zero and apart from practice and Grand Prix that’s really all you need.

The main choice after picking one of the above one is who you’ll play as.

There are four different high speed hover vehicles to choose from.

Each vehicle has its own attributes such as quick acceleration, top speed, handling or stamina and each will require mastering to complete the game and a small back story for each driver is included in the manual.

There are a number of classes to race in and each one increases the difficulty and skill required to navigate at 800 KM/H and beyond.

Whilst the easy courses are fun and fairly easy to navigate and complete to give novices a rewarding sense of achievement.

This is just the beginning and the advanced courses take a lot of skill and practice to master which in a racing game from this era is a feat that not many have managed to even come close to giving gamers.

The courses in F-Zero are phenomenal and epic in their own special ways.

From the futuristic metropolis of Mute City to the bright and sunny Big Blue they are fast and fun throughout.

Naturally, depending on the class selected (Knight, Queen and King), the difficulty will be appropriate with tighter turns or more jumps and mines in the way along with natural and course hazards.

These hazards include crosswinds where you constantly have to adjust your position with the L and R buttons just to stay straight or magnets pulling you in to the side to zap your vehicles energy.

You also get three turbo boosts (a bit like Chase H.Q) if you fall behind and it’s best to hit these up on the straights unless you have insane reflexes.

If you rank high at the finish line you get an impressive side profile view of the vehicle before it speeds off into the sunset which is a nice touch.

Ok, it’s not that impressive today but back in the early 90’s it was a ‘WOW’ moment as is the course replay when you win your class of courses.

F-Zero adds another dimension that was missing from most racing games up to this point. Damage.

To enable the vehicles to hover and charge along at breakneck speed, the courses are energised and this adds another dimension and incentive to drive well.

If you were to hit the edges of the course, your vehicle will lose energy and along with hitting other vehicles including ones that are armed to explode upon contact your energy can be depleted pretty quickly.

To help along the way there are energy ‘Pit Stops’ although you don’t stop but race through them on the side of the course when they appear and get charged back up.

Without these your vehicle explodes into a smokey crater and its time to start the race again.

Nintendo really deliver when it comes to gameplay in F-Zero.

The sheer variety of courses, the excellent soundtrack and the just one more go gameplay help to keep F-Zero up there with some of the SNES’s greatest hits.

The only downside is the lack of a 2 player option but you won’t mind as you’ll still be having so much fun playing this epic game with its bright and bold Mode 7 graphics that frankly still look awesome nearly 30 years on.

F-Zero (1990) SNES Retro Review
Is F-Zero worth playing again?
F-Zero is like an old friend you haven't seen in years. You can just pick up where you left off and carry on. Go play this game again now, you won't regret it.
Graphics
88
Sound
91
Gameplay
88
Classic Factor
91
Reader Rating8 Votes
92
Good Bits
Still looks great today
Still as addictive as ever
Bad Bits
Only one player
Presentation a bit lacking
90
Retroheadz Score