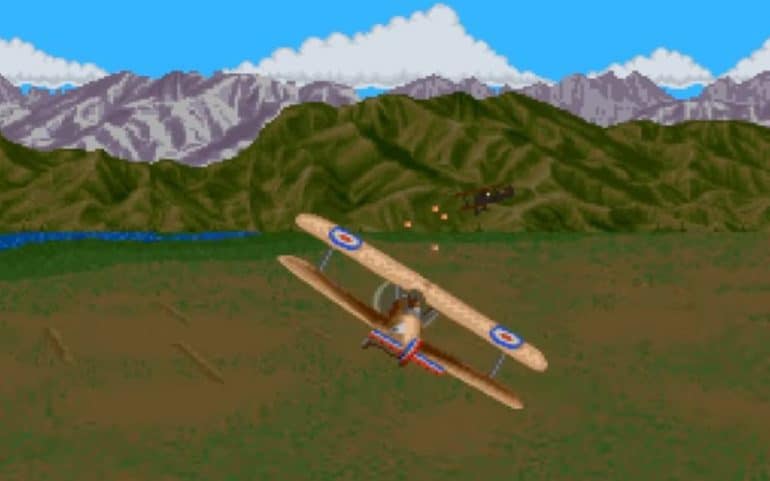 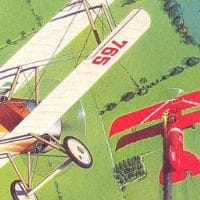 Blazing Skies is a World War One based flight simulator that came out in 1992 and was developed by Namco.

It was also called Wings 2: Aces High in the US.

You are a rookie pilot who is tasked with a multitude of missions from air superiority to strafing and risky bombing campaigns against the enemy.

Each mission interlinks with the next which drives the story in Blazing skies and it has a Biggles feels to it throughout the game.

Playing Blazing Skies takes some getting used to especially if you are used to more direct handling sims of today.

Controls are a bit clunky in places but once you get used to them you’ll start to get the hang of things although its the main air battles part that needs the most mastering.

The variety of missions in Blazing Skies is welcome as the games play areas are a tad samey although to be fair the Mode 7 graphics still look great.

Death From Above, Below & To The Side

As the game progresses it will be inevitable that a pilot or two will get shot down.

This can actually be quite painful in the game as with each successful mission you get the chance to level up your pilot and increase their flying, shooting, mechanics and stamina levels.

Losing a fully skilled up pilot due to a mid-air collision or being hit by some random flack on a bombing raid can really set you back as you’ll have to use one of the remaining pilots and start boosting their skills up against more seasoned foes.

Luckily the game has a password system and thankfully taking a quick picture of it on your phone is far better then having to write down what looks like the pre-cursor to a Bitcoin wallet address sized password.

Is Blazing Skies Worth Playing Today?

Blazing Skies is one of those games that you’ll either love or hate. It’s as simple as that.

You’ll love it for the cool Mode 7 graphics and hate it for the clunky controls that are hard to get used to.

Apart from that its a fun little shooter that showed everyone what the SNES could do and what the Mega Drive could only dream of very early on in its life.

It also had a bright yellow box in the UK that worth getting alone as it just looks awesome in a collection and no doubt would have stood out massively back when the choice of SNES games was pretty small.

From a purely nostalgic point of view, its well worth playing again although you may not find it as much fun or commit as much time to it as you may have done back in 1992 but its cheap to buy on eBay so is worth a try or just to add to your collection.

What do you like best about Blazing Skies? What are your memories of the game? Let everyone know in the comments below.

Blazing Skies (1992) SNES Classic Review
Is it worth playing again?
Blazing Skies is a fun and challenging flight simulator game. It takes some practice to get used to the controls but once you do you'll enjoy it.
Graphics
80
Sound
70
Gameplay
69
Classic Factor
75
Reader Rating7 Votes
46
Good Bits
Mode 7 heaven!
Lots of missions to complete
Bad Bits
Levels looks very similar
Controls are clunky
74
Retroheadz Score