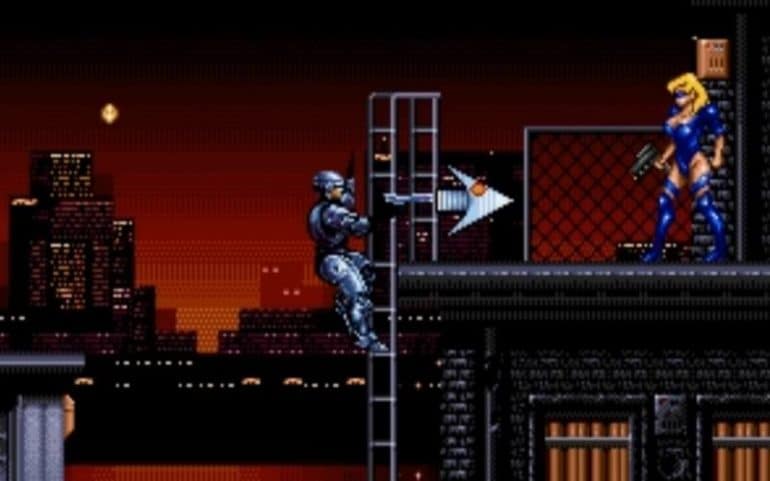 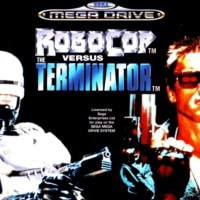 Robocop Versus The Terminator is a platform shooter game released on the Mega Drive by Virgin Interactive back in 1993 and is loosely based on the comic series of the same name.

Robocop inadvertently gives Skynet the tech it needs after a fight with ED-209 which enables them to takeover after he uploads himself to the OCP main computer.

Murphy then gets reactivated in the future and has to thwart Skynet’s takeover and save humanity.

The game has two timelines to fight in, present day Detroit and the future which is ruled by Skynet.

The first part of the game sees you going up against thugs and hoodlums who are armed with Cobra Assault cannons as well as drones while you move around the levels rescuing hostages.

It has a similar feel to Alien 3 in that regard, however it becomes apparent very quickly that the violence is turned up to eleven.

Shooting the baddies makes them erupt in to bloody messes which was controversial at the time and reminds us of Techno Cop on the Amiga for the bloody gore aspects it emphasises.

The second part sees Robocop in the future and has Murphy battling Terminators who take a few more hits to defeat then humans as you take the fight to Skynet and end up facing off against a huge Terminator skull.

Once defeated a new timeline is created and Skynet is put back in its box… for now.

Playing Robocop Versus The Terminator

The game is platform based shooter and is similar to previous Robocop games in that you plod along the large levels and shoot the heck out of everything that moves.

To help Murphy he has a huge collection of weapons at his disposal from his standard and iconic sidearm to homing grenades and three way shots.

In the future levels the weapons are more advanced and include pulse rifles and laser guns just like the ones seen in the future scenes in the movies.

Robocop Versus The Terminator looks fantastic and is one of the compelling reasons for picking this game up.

In-game animation is smooth and detailed and Robocop looks awesome as do the enemies who deaths are shown in all their gory blood soaked glory.

The Terminators look the part too with some starting off as full ‘Arnie’ human looking replicas and once shot down the first time change in to Endo-Skeleton versions before the final shots take them out completely.

Finally, the levels themselves are detailed throughout, with some stunning city based backgrounds on the earlier levels showing of some serious pixel art skills and the future levels being dark and broody.

This game shows off what the Mega Drive is capable of and is definitely a strong point.

Hats off for the sounds effects with sampled screams and Robocop saying ‘Excellent’ when he picks things up.

The sampled speech adds to the atmosphere as do the various sound effects for the weapons with chunky machine gun sounds and laser sounds later on suiting the weapons perfectly.

Music wise its great throughout, with the metallic sounding FM sound chip cranking out some seriously good toe tapping tuneage.

One thing we noticed that there were similar sounds that were reused on later Virgin games like Dune 2 but still there’s nothing to complain about here.

Not really, apart from it can get quite hectic in places and because you are controlling a heavy cyborg can make it hard to avoid hits.

Overall Robocop Versus The Terminator is a solid platform shooter and it’s made even more so by the inclusion of two of Hollywood’s most iconic Cyborgs.

Is Robocop Versus The Terminator worth Playing Today?

Robocop and Terminator fans alike will have a blast playing this again, yes its also available on the SNES.

All in all, the Mega Drive version is the one to get as it has all the gore and looks and plays better than the SNES version.

The only advantage the SNES version has are comic book style scenes that explain the story better.

This, though is small thing overall so hunt it down on the Mega Drive and have some cyborg destroying fun.

Robocop Versus The Terminator (1993) Mega Drive Classic Review
Is it worth playing again?
If you love both Robocop and Terminator then you'll love this. If not its still worth a play as its a solid and fun platform based shooter.
Graphics
91
Sound
89
Gameplay
85
Classic Factor
82
Reader Rating2 Votes
93
Good Bits
Looks great
Great music and SFX
Bad Bits
Robocop only plods along
Can get hectic in places
87
Retroheadz Score