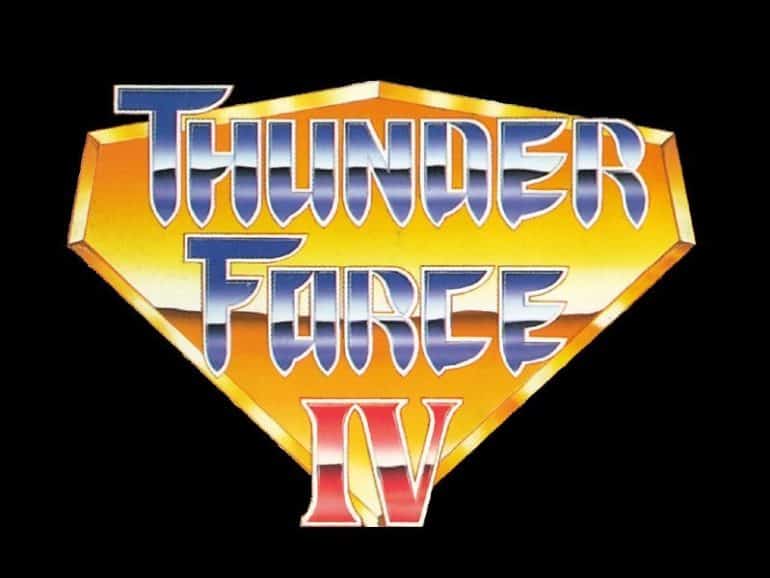 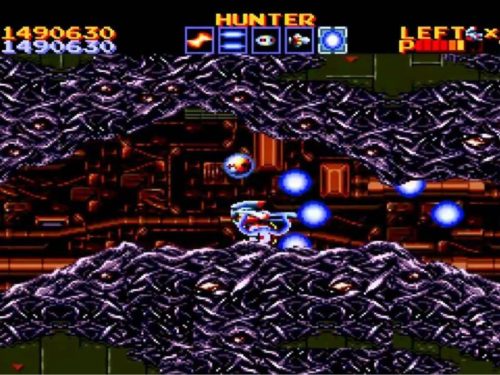 Thunder Force 4 (or Lightening Force: Quest for the Darkstar for US readers) came out on the might Megadrive/Genesis in 1992 and was made by Technosoft.

The game is a side-scrolling shoot ’em up and whilst there were previous releases it’s this one that we reckon is the absolute pinnacle of the series as a whole.

An Epic Shoot ‘Em Up

Everything about Thunder Force 4 is big and brash, from the awesome heavy metal riffed intro that evokes that feeling that once you press start you’re going on an adrenalin rush of a ride that had few peers at the time.

Thunder Force 4 gives you the option at the start of the game to pick the level you want to start on, this is a neat touch and one that we didn’t see too often, all the levels need to be done anyway so you pick your favourite and off you go.

The levels are varied and a neat touch is and some look more subdued than others , however, in the main, it looks amazing and shows of the Megadrive’s capabilities for the time very well.

Let’s Talk About The Music

The music, though, well, that’s a different story!

As with all 16-Bit shoot ’em ups, they are no good without a rocking soundtrack to gee you along on your mission to rid the galaxy of the assortment of foes and as mentioned earlier the soundtrack is simply amazing.

Alongside the techno-rocking intro music, Metal Squad, the music to one of the later levels is heralded as one of the greatest 16-Bit tracks ever to grace Sega’s biggest selling console.

The music is so good it’s worth playing it just for this but luckily the gameplay is awesome too and there are some serious fans out there and some seriously good covers of the tracks on YouTube, you should go check them out (after reading this of course!)

When playing the game can get quite hectic, the waves of enemy craft that come at you will keep you on your toes throughout and the game has some genuinely difficult moments; you will lose lives in Thunder Force 4!

Thankfully, you do have room for manoeuvre, which is a nice touch as the game field extends further than the screen you’re playing on so you can move up or down away from the hordes of enemies that the game throws at you.

Luckily, halfway through the game, you get a nice upgrade, your special weapon the Lightning Sword and for some of the bosses, and the action leading up to them, you’ll be thankful you have it!

Talking about bosses, they are huge and nicely varied in Thunder Force 4.

Thankfully you have some awesome weapons to throw back at them where you can collect different coloured orbs to either have homing bullets, ones that look like blades and backwards firing rail guns rounds spewing from your cool looking craft being standout options in the game.

You can also get extra help with shield pickups too which are very handy to have.

Overall, this is one of the greats, it’s not cheap to pick up nowadays (most Shoot ’em ups aren’t) but it’s definitely one to get if you’re a collector, although you probably know that and have it already.

If you have a Nintendo Switch you can grab it for under £6 which for a price of a pint will give you tons of fun and quench your thirst for solid gaming experience.

If you’re more of a casual retro gamer then yes, go back to it and play it again, especially if you like this genre, you won’t be disappointed with this epic action packed shooter.

Thunder Force 4 (1992) Megadrive Retro Review
Is it worth playing again?
If you love shoot 'em ups then Thunder Force 4 is one of the best examples that the Megadrive has. Be warned it will get hard and you may pull your hair out in places. Apart from that its brilliant!
Graphics
84
Sound
92
Gameplay
88
Classic Factor
86
Reader Rating7 Votes
83
Good Bits
Epic soundtrack
Cool weapons and power ups
Bad Bits
Can be insanely difficult in places
88
Retroheadz Score