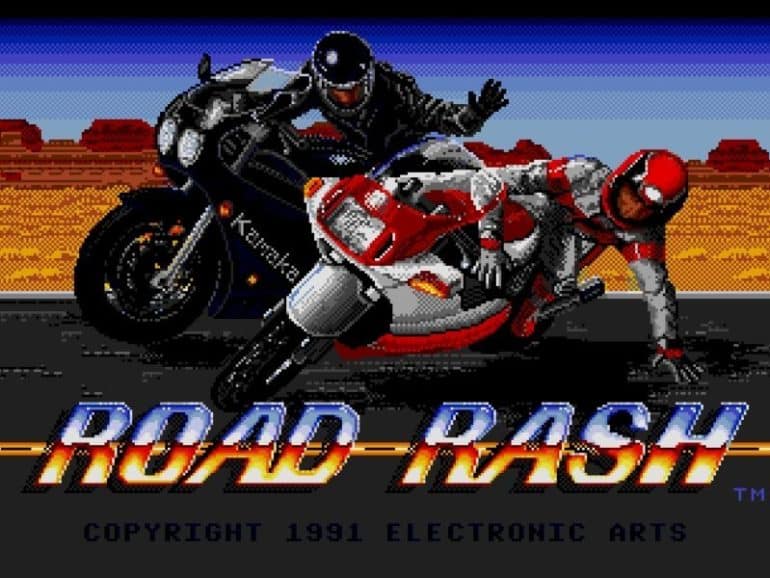 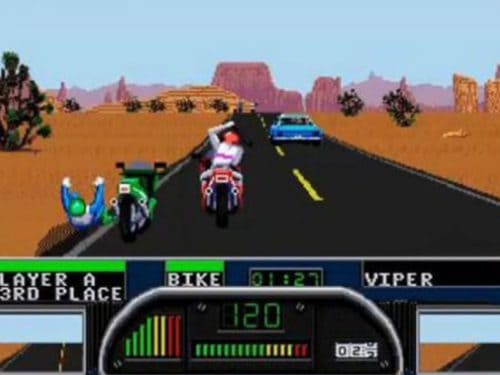 Road Rash came out way back in 1991 for the Sega Megadrive/Genesis and absolutely blew people away when it launched.

Prior to Road Rash, the only bike based racing games were titles like Super Hang-On which came out in 1989 being an early release of the hit arcade game from 1985, was fun but short lived and dare I say it a little bit samey and that was your lot.

So when Electronic Arts came released Road Rash it kind reinvigorated what a motorbike racing game was all about.

Road Rash if you’ve never heard of it before had one unique thing about it that set it apart from the usual racing games, it introduced combat, no, not bullets and rockets but clubs, fists, and kicks and this is what made the game absolutely amazing.

You could avoid combat and ride to the finish if you really wanted to, however, you will still come against some of the bikers who won’t allow that

They will try and knock you off your bike so you’ll have to fight back and its great fun to do and seriously satisfying when you knock them off their bikes and see them crash to floor in your wing mirrors.

The game not only had this to contend with but you also had to be careful of obstacles. Hit a corner too fast and you’re playing with fire when you come off the road as you’ll end up being abruptly stopped by a road sign, Deer, trees even a house.

The most annoying ones are little poles that stick out of the ground and send you flying forward whereupon once you’ve dusted yourself down you have to run back to your bike and carry on unless the police catch up with you and then its race over and a hefty fine.

The other riders are chaotic, they act as though they are trying to win too and will do whatever they can to stop you from beating them in the main and this again blew people away as they take risks which can hurt them

The game also introduces oncoming traffic and intersections where if you end up on the wrong side of the road before cresting a hill chances are you’ll be met by Grandpa Joe’s caddie ready to do a hit and run on you but you can also push another rider into oncoming traffic as well which is awesome to do, even today.

These hazards really set the game apart and the interactivity with the local fauna, flora, and residents vehicles really does give you the vibe of being in a full on illegal bike race. It’s just great and still feels fun today.

So what’s does winning a race give you? Cold hard cash to spend on a new more powerful

The game has some great and humorous cut scenes too, win a race and you’re rewarded with lots of cheering people, lose a race and some slapstick accidents will be what you see.

Sound is great too with heavy rock being, blues and other styles depending on where you are racing at the time. It fits the game perfectly and shows off what the venerable Sega sound chip on the system can do.

What’s not to love about this game, it’s got everything and really showed off what the Megadrive could do, it unfortunately never made it to the SNES, probably due to the violence factor it did have a really awe-inspiring version later on the Panasonic 3DO but for many it’s the Megadrive/Genesis outing that will be remembered the most and is one you can definitely come back to again and enjoy just as much as you did the first time.

Road Rash (1991) – Megadrive Retro Review
Is it worth playing again?
Road Rash is still just as fun today as it was back in the day. Whilst the racing is linear it how you get to the finish line that counts and you'll have a lot of fun going back to it again or if you've never played it before, you really, really should!
Graphics
77
Sound
75
Gameplay
90
Classic Factor
92
Reader Rating6 Votes
89
Good Bits
Knocking opponents off their bikes never gets old
Cool cut scenes
Bad Bits
Hitting things at speed
Intersections (see above)
84
Retroheadz Score