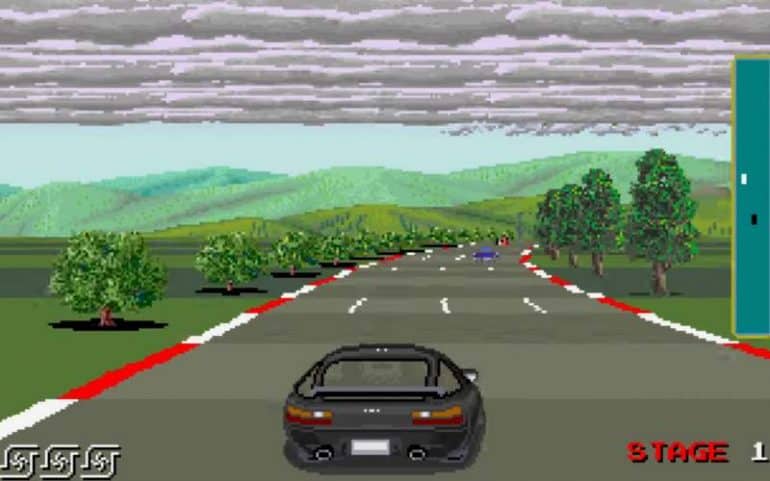 The arcades of today are but a former shadow of the 80’s and 90’s heyday and are now chock full of fruit machines, grabbing machines and ticket spewing machines where it feels like you need to spend the equivalent of a mortgage deposit to win a plastic whistle or a pack of sweets.

Gone are the stand-up cabs with the likes of Final Fight, The Simpsons and Mortal Kombat and Neo Geo titles but if you’re lucky today you might come across a driving game or two still up and running amongst the dross.

With this in mind let Retroheadz take you on a nostalgia journey of the best arcade racing games ever made and if you find them in a dimly lit arcade somewhere throw in some coins and give them a go again as it might just be your last chance to do so before they’re gone for good.

Everyone knows and hopefully loves OutRun.

Sega’s blue-sky love letter to summer driving came out way back in 1986 and blew everyone away with its unbelievable sprite scaling graphics, timeless soundtrack (Magical Sound Shower and Splash Wave anyone?) and the freedom to choose where you went next as you beat the clock to the checkpoint.

It also helped that you could do all this in the most popular exotic at the time, the Ferrari Testarossa.

Everything about OutRun is brilliant, it was way ahead of its time both technically and for its additive gameplay and its testament to Sega that even today people still play it often on the Switch and it’s also well worth getting on the Sega Saturn as well.

If you find the deluxe hydraulic arcade cab somewhere you absolutely must play this arcade racing game in its original form.

You have to catch up to the criminals in every level and ram them until there delicate exotic sports cars conk out and to help you on your way along the luscious course full of obstacles are three turbos that propel your black Porsche 928 to ludicrous speed.

Chase H.Q is well worth emptying your wallet for if you find it even just to hear Nancy’s voice telling you that the Idaho Slasher is getting away in a British Sports Car once more.