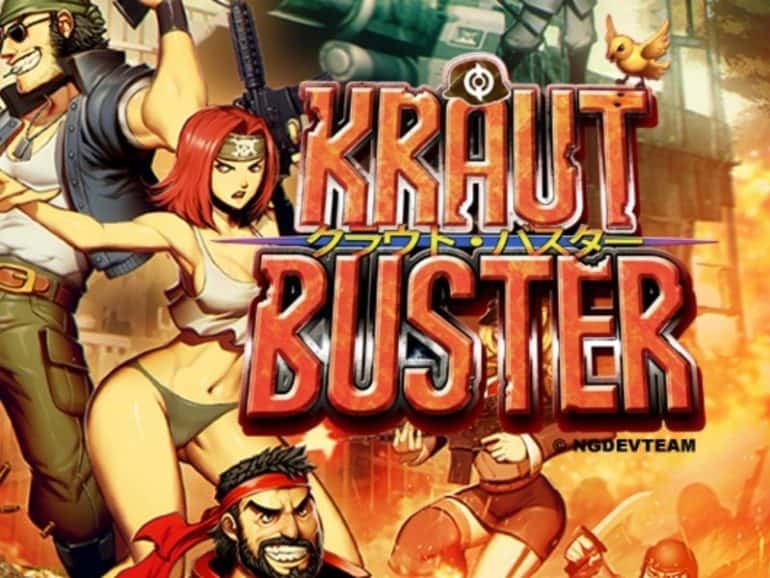 The Neo Geo is one beast of a machine, ruinously expensive when it first came out, it still is regarded as the ultimate machine to collect for. You need to be brave, rich and maybe a little bit crazy to embark on getting all the releases for the monolithic console that first came out in 1990.

So, whilst some of you Neo Geo fans will know about this, many other retro fans probably don’t know that a brand new game is coming out for it in 2017.

The new game comes from the well-respected German developers at NG:DEV.TEAM is called KrautBuster.

The game is a classic side scrolling run and gun just like the legendary Metal Slug series that came out on the system and for those unfamiliar with Metal Slug, the Contra series.

The game is set in 1936 in a country called Krautland and sees the brilliantly animated main characters (from the Kraut Busters Corps) take on a whole legion of enemy soldiers and bosses and end up defeating the Evil dictator Dolph Edelwolf.

One of KrautBuster ‘s more interesting features is that your character can put on different masks that change his abilities, from weapons, the behavior of the soldiers you’re up against and the backgrounds themselves. It kind of reminds us of Kid Chameleon in that respect mixed with the unforgiving yet utterly rewarding gameplay of Metal Slug.

Krautbuster looks amazing too, the whole game is made up of handrawn backgrounds and characters and looks utterly gorgeous so just what you expect from a Neo Geo game then.

Krautbuster is expected to be released in September 2017 and thanks to pre-orders there are unfortunately none of the highly desirable AES home cartridge versions left to order.

Krautbuster is also coming out on the MVS arcade version of the Neo Geo and good news, their store still says their available. How much you might ask? Well, it’s yours for €399 and the game comes on an predicted 784 Megabit cartridge, small change for games nowadays but for a Neo Geo game its a whopper!

We know €399 sounds a lot but if you are a serious Neo Geo collector it’s a no brainer and thanks to its limited release status, it will be a worthy investment. Hopefully, they make a version for the Dreamcast as they have done for previous releases which will cost significantly less.

Check out the game for yourself, this is an earlier version so it will look even better upon release but one things for certain, its looks great and shows that there is still lots of life left in the iconic Neo Geo.

Want to know more about the Neo Geo, check out our article on why its one of the greatest consoles ever here