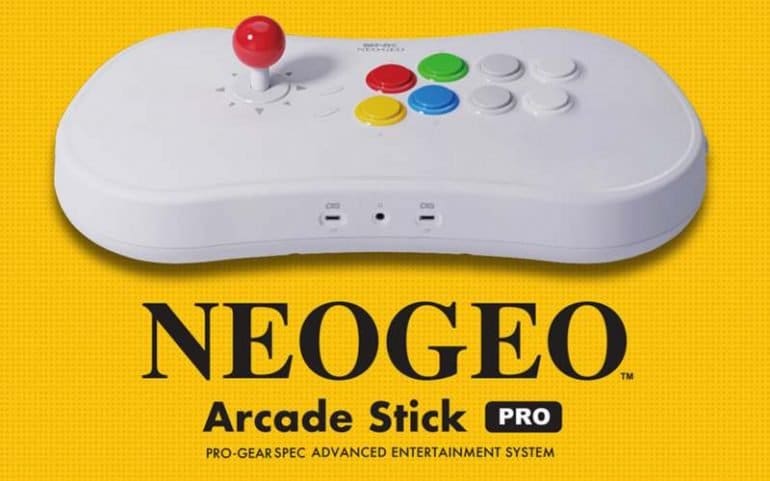 Not too long ago SNK announced that some new Neo Geo hardware was incoming and it would be compatible with the Neo Geo Mini.

Well now its been revealed that a giant eight button arcade stick called the Neo Geo Arcade Stick Pro is the new hardware they were hinting at and will have additional ports for players to connect up the Neo Geo CD style controllers that you could get with the mini console which was released back in 2018.

The impressive looking arcade stick which SNK have stated may change before release has a resemblance to the second generation Neo Geo home stick’s (also know as the kidney) that came out with the Neo Geo CD back in 1994 rather than the original squarer design.

The Neo Geo Arcade Stick Pro stick has two modes, the first it console mode where you can connect up the stick to your TV and play any of the built in games on it.

The second mode is where you can use it as a dedicated stick either on the Neo Geo Mini if you have one already or you connect it to your PC and use it as a controller.

What Games Are Included With The Neo Geo Arcade Stick Pro?

No firm details have been announced yet but we reckon at least one or more games from franchises such as Metal Slug, Samurai Shodown, Fatal Fury and of course King of The Fighters will likely be included given their popularity with hardcore gamers and Neo Geo fans worldwide.

How Much Will It Cost?

Again just images have been released so far but given that Capcom are coming out with their home arcade for £199.99 with 16 games it does have two player controls built in as standard it should cost less than the Capcom stick in our opinion but then again Neo Geo’s have always been expensive so we’ll have to wait and see.

If you want to play two player on the Neo Geo Arcade Stick Pro you either need to get another one or connect up the controllers already available on the Neo Geo Mini to be able to play local versus matches against your mates.

It also comes with a headphone socket and will connect up to the telly by HDMI.

For now that’s all we know and will update you once we know more.