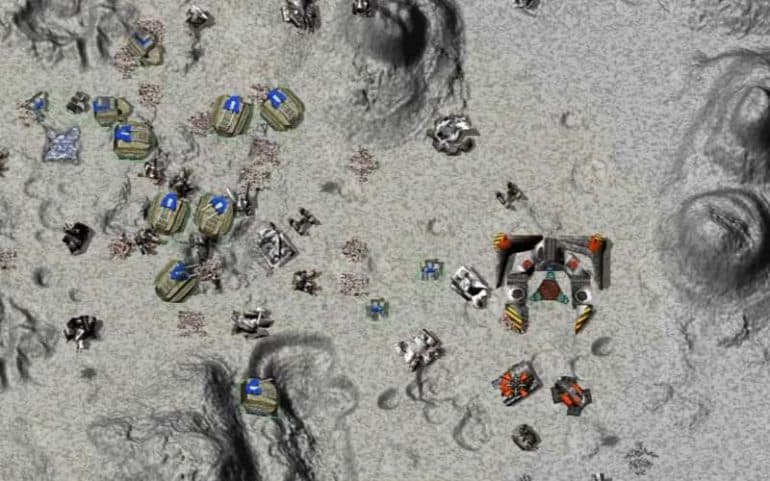 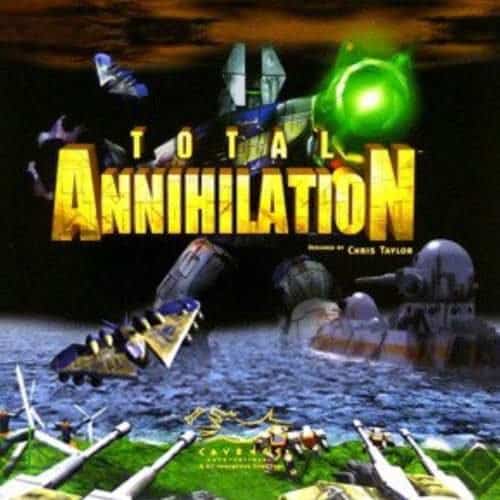 Total Annihilation is a real time strategy game by Cavedog and came out way back in 1997 on the PC.

Even though Total Annihilation came out over 20 years ago you wouldn’t have thought it could be that old as the game play is still fantastic today still.

As with all good RTS games, the storyline is what drives you in single player mode.

In a nutshell, there are two competing factions, the Core and the ARM.

Both have been raging a galactic scaled war for thousands of years and you join the fight as a commander to end the war and bring victory to whatever side you choose to represent.

Interspersed between levels you get a voiceover from a James Earl Jones sounding narrator which is a neat touch whilst you’re reading the next mission’s brief.

In the game the main unit is the Commander, a huge Mech who has the ability to build basic structures and repair units.

The Commander must survive no matter what or players will lose the battle immediately so has to be protected where possible although you can shoot enemies with a Laser but it’s the D-Gun that literally disintegrates enemies.

It’s a one shot weapon that will destroy any unit it comes up against no matter the size but you have to use it manually which in the heat of battle can be quite confusing so when in doubt let your other units that the Factories have built take the flack.

Like all RTS games you start off with basic units and as the game progresses new and more powerful ones are unlocked which in turn take up more energy and metal to produce.

Luckily, you can speed things up if you have the resources by building additional advanced builder robots who can be utilised to help factories and building build quickly.

These builders robots, vehicles and ships are vital as they have the ability to build better and ore advanced defenses and structures although they are not as fast as the Commander you can combo them up to speed things up.

The Builders can also repair units including the Commander and one strategy is to have one ‘Guard’ the Commander so that when it gets damaged, they can quickly start repairing it.

Across either faction the more you progress the more powerful the units at your disposal.

From Artillery K-Bots to Bombers and hulking great Battleships, Total Annihilation has a huge amount of units to build and use for various things.

For example the earlier cheap units are ideal as cannon fodder to draw off enemy fire from key units and structures while you bring your own big guns to bear and the sheer number of units you can have onscreen would make some of today’s Triple A titles blush in embarrassment considering what this game ran on.

As with all RTS games, managing resources is a key element of the game.

You need two things to build in Total Annihilation, Metal and Energy.

Energy is a lot easier to produce as you can build solar collectors, wind and tidal turbines and you can also take it out of trees on the ground when things get a bit desperate.

Metal however can be in short supply with some levels requiring you to recycle the burnt out hulks of your destroyed units and the enemies to make ends meet.

This is a great touch and has a real strategic element to it and some risks if you must send out builders far from home to collect the metal to use to build up your forces.

Sometimes however, the destroyed units can be used defensively as both the player and the enemy utilize line of sight so if a submarine is trying to kill your remaining units, strategically placing them behind a sunken ship can provide respite whilst new forces are being built.

Later levels see you on Metal Planets so the only thing you need to do is build up a massive army to go head to head with an equally impressive enemy force.

Total Annihilation is a huge game with tons of levels across various worlds and some can see you having huge naval engagements or giant land air battles that see both sides taking losses in a hectic melee of metallic destruction.

Some levels see you on dry land throughout and some see you island hopping to victory, slowly taking the enemy out in a slug fest that can take hours to do.

It’s worth saving before you go forth into the fogs of war although a forward placed radar can see through it and if you have long range units you can use the mini map to target them to help whittle down your nemesis which is not something you would have seen in an RTS prior to this and in some cases since.

You’ll need to take your time and work out a strategy to overcome the odds on some impressively large maps.

I would recommend saving the game before you push forward as it can be frustrating to lose after playing the mission for over an hour when a rush of enemy units come knocking on your bases door.

The sheer variety of missions and the scope and size of them in Total Annihilation puts many other well known RTS games to shame and is testament to the love and work that clearly went into this game.

The games graphics are functional and do the job.

Back in 1997 they were hugely impressive being one of the first RTS games to feature 3D units and terrain and when you’re playing it today you’ll still enjoy them.

Thankfully, in most cases you still have a sense of control and can pick out most units.

There are only four main tracks to listen to in-game.

All are orchestral and match the scope of the proceedings well but can get a bit repetitive.

Just must remember this is an old game and then you’ll forgive it.

Is Total Annihilation worth playing today?

Simply put, yes it is.

I hadn’t played this game since the late 90’s and whilst a lot was familiar from memory, it feels like a completely new experience and it’s taken tons of evening to complete and a lot of the time I was playing it until the small hours as it’s hard to stop playing once you start.

It’s available with the Commander Pack on GOG.com and given that it costs under £5 provides unbelievable value for money and still holds up brilliantly compared to its contemporary rivals and it even comes with all the expansion packs too.

To put it mildly if you’re a fan of the genre it’s a no-brainer and if you’re new to it you’ll find it compelling and rewarding throughout and the bonus is there’s not a loot box or micro transaction in sight.

Total Annihilation has fiendishly cerebral and utterly rewarding game play that has stood the test of time fantastically.

Total Annihilation (1997) PC Retro Review
Is it worth playing again?
For the price you'll be hard pressed to find a game that will keep you busy for weeks. Total Annihilation will do just that and you'll love it.
Graphics
73
Sound
68
Gameplay
94
Classic Factor
91
Reader Rating8 Votes
89
Good Bits
Huge single player campaign
Exceptional value to buy today
Bad Bits
Music gets repetitive
Graphics are looking a bit dated
82
Retroheadz Score