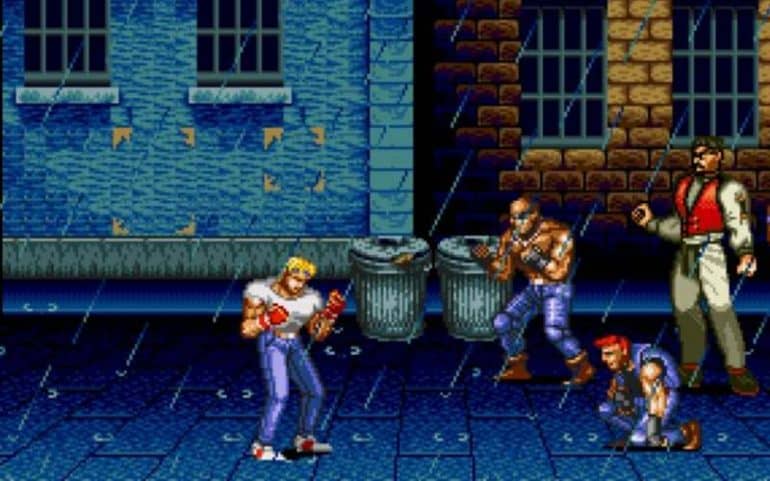 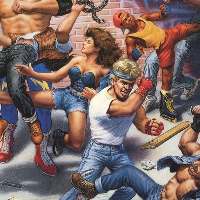 Streets of Rage 2 is without a doubt one of the most famous Mega Drive games ever made.

It gave fans even more characters, bigger, bolder graphics and quite possibly one of the best soundtracks of the 16-Bit generation and packaged it all in to a 16 Megabit cartridge that is still held in legendary regard today.

Mr X the main baddie of the first Streets of Rage game is back a year after from his defeat at the hands of Axel, Blaze and Adam in the first game and wants his revenge.

So what does he do? He kidnaps Adam and it’s up to Axel and Blaze with the help from Adam’s rollerblading younger brother, Skate and wrestler buddy Max to hit the mean streets and deck the hell out of Mr. X’s hoodlums and rescue Adam.

All this is explained in a fantastic intro that still looks cool today and wasn’t often seen in games of the time and sets the stage nicely for the action to come.

The original Streets of Rage had three playable characters to choose from although Axel and Adam were pretty similar.

Streets of Rage 2 mixes it up as each character has its own strengths and weaknesses.

Axel being pretty much average in strength, speed and so on whereas Blaze is weaker but has one helluva high kick,

Skate being on, well, skates is really fast but weak and Max being the heaviest is slow but has the most power however he can’t jump to save his life.

The variety in characters means that the game will play differently depending on who you choose.

Streets of Rage 2 took the already stunning city from the original and ramped it up significantly.

Thanks to the game having double the memory capacity compared to the first Streets of Rage the city now feels more alive than ever before.

The first part of the beginning level feels familiar to the first game with lots of neon, phone booths to smash and shopfronts aplenty but it soon moves on to the mid level boss outside a restaurant/club and once defeated you enter the bar only to get to the end and fight the barman out the back.

Whilst the boss is easy to defeat it still evokes serious nostalgia every time we reach this point and will instantly take you back to that first moment you saw it and just thought WOW!

The city itself is a major part of the game, the way you see a venue from afar and get closer to it as you progress through the levels with the theme park and bridge levels being our favourite moments in the game especially the theme park when you go inside and smack the crap out of the Bare Knuckle arcade cabinets is pure joy to this day.

Every location in the City is really detailed and made you feel (at the time) that it was a living breathing metropolis.

It has been emulated pretty much ever since but even today it stands out and feels special and that Sega really put a lot of effort into its flagship game.

Streets of Rage 2 progresses through stadiums, factories, ships and finishes off at the corporate headquarters of Mr. X’s reborn empire and as you go through each level of the Streets of Rage 2 you see a slow transition from night to morning throughout and the time-frames urgency in rescuing Adam is fantastically portrayed.

Before you can even think of getting to Adam, you have to take down quite a few of Mr. X’s associates who range from whip wielding scantily clad ladies of the night to bomber jacket wearing street punks who are obviously looking to rise up the ladder and get in the good graces of Mr.X because they keep coming back for poundings over and over again. We’re looking at you Donovan and R.Signal!

Luckily one the new features compared to the original is that each hoodlum has a health bar so that you can now see how much punching and kicking you need to do to get them out of the way before the next load of victims come your way.

Some have special moves such as a Karate-esque character you first see jumping down on you on the way to the Pirate ship who throws a sort of proto-fireball at you.

Some like the first Streets of Rage also are armed with knives, baseball bats, lead pipes and even ninja stars but no worries if you get hit, there’s always a chicken dinner under a bin somewhere for you to find and restore your health.

The most annoying (but still impressive) punks to take down are the ones on Motorbikes where you have to time a good old kick to the face to take them down and hope that you’re not near the bike as it explodes when the comes off.

Overall the punks are varied and have just the right amount of varied moves to keep you on your toes throughout the game and compared to other games of the era this has helped it stay timeless and still impresses us today.

On to the bosses, and this is where things really get good.

Each boss in the game is large and stands out from the punks quite significantly.

The bosses in the original were great and Streets of Rage 2 takes it up to new levels with bold and colourful bosses full of unique moves and loads of stamina that put even the toughest punk you’ve dealt with on the lead up to the showdown to shame.

Standout bosses include a wrestler who has an uncanny resemblance to WWF superstar The Ultimate Warrior as well as tubby boxers and as mentioned earlier cocktail shaking bar managers.

Street of Rage 2 has it all and whilst some are just annoying such as the rocket pack wearing boss called Jet from the Bridge level where you have to time a kick to slowly take him down the majority of them you will have a fair challenge with but defeat them you will.

Special mention has to go to Shiva, the surprise sub boss just before you take on the Tommy Gun wielding Mr. X who looks awesome and we wish he was a secret playable character as that would have been amazing.

Luckily to aid you on your journey you have a few tricks up your sleeve.

Gone are the police from the first game who came to your aid and saturated the area with rocket or vulcan cannon fire and instead things get a bit more personal.

Each character has two special moves one but the trade off is that once activated will eat a bit of your health.

For moves where you just press the A button without direction if it doesn’t connect with a punk or boss its no biggie, but if you move the controller left or right with A pressed then the more impressive move will take health regardless of whether you connect with an unfortunate punk or boss.

The moves are varied and range from a melle attack that Axel has to fireballs type moves from Blaze and Skate pulling off some breakdancing sweeps to Max suddenly getting fast and shunting shoulder first in to the enemies are super speed and at the same time doing massive damage.

The special moves help out massively and were obviously inspired by StreetFighter 2 which was massive at the time which was still awaiting a Mega Drive release and with the games two player battle mode you could take on a mate and have a special move filled one on one fight which doesn’t really stand up today but was a nice bonus back in 1993.

The standout from the first game was the Yuzo Koshiro soundtrack chock full of contemporary dance music and Streets of Rage 2 took this to another level.

With Rave and Techno tracks being the main music although special mention has to go to the title music with it’s classic Streets of Rage Engima inspired theme was back as it should be along with a remixed version later on in the game.

The music makes the game come alive and even today it still sounds fresh and will make you wonder just how they managed to cram all this in to what is basically two megabytes with all the graphics and code and so on.

The soundtrack does a great job of capturing what was in fashion music wise back in 1993 and has a timeless quality about it that even today will still make you want to stop playing the game go to the sound select options and just play it.

Is Streets of Rage 2 Worth Playing Today?

Hell yes and its just as much fun in two player mode. Everything about Streets of Rage 2 is pretty much spot on from start to games classic ending.

It would have been great to have maybe one more level to go through as the beach and factory level towards the end feels a bit weak compared to earlier levels it more than makes up for it as being one of the best side scrolling beat ’em ups ever made.

It just oozes class and showcased the Mega Drive at the peak of its power and popularity and has stood the test of time incredibly well .

Thanks to its popularity you can get Streets of Rage 2 on pretty much any current system of on various compilations that have been released over the years.

Playing it on original hardware still feels like the best way to play it if you can, especially on the original Mega Drive control pad for a truly authentic experience.

Even though things have moved on Streets of Rage 2 will always be there to give you an amazing time and transport you back to 1993 again no matter if its right now or ten years time it’s still going to be an awesome ride and one that you’ll come back to time and time again whether on your own or with a friend Streets of Rage 2 is just brilliant.

What do you think of Streets of Rage 2? Share your thoughts and memories of this classic game in the comments below.

Streets Of Rage 2 (1993) Mega Drive Classic Review
Is it worth playing again?
Streets of Rage 2 is quite possibly the pinnacle of side scrolling beat 'em up's. It looks great, sounds awesome and plays like a dream. A must have game that you'll keep playing for years to come still.
Graphics
95
Sound
95
Gameplay
94
Classic Factor
96
Reader Rating11 Votes
83
Good Bits
Looks stunning
The soundtrack is a work of art
Bad Bits
A couple more levels would have been awesome
It's a shame that Adam didn't make it on the game
95
Retroheadz Score