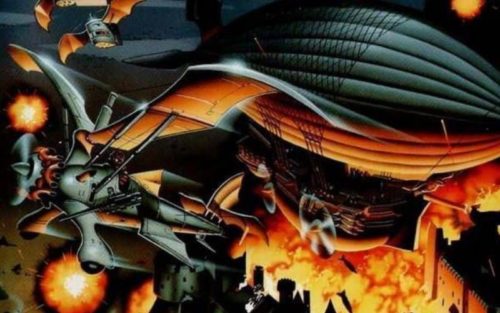 Shoot ‘em ups are two a penny on the Megadrive and sometimes its hard to find one that stands out from the usual spaceship and alien empire related crowd.

So, its refreshing to find one that moves away from this and goes with a more alternative setting such as a steampunk one.

Steel Empire on the Megadrive does just this and does a awesome job at conveying the setting on the 16-bit favourite.

Steel Empire greets you immediately with an ‘olde worlde’ silent movie or western photo style intro, telling you that the Motorhead Empire is suppressing the world that looks familiar but is different to one you might know (Steampunk).

Its your job to rid this alternative universe with one of two ships.

Both ships have a special lightning weapon which will aid you on your mission to free the world.

Bar the steampunk setting the story is standard stuff as you’d imagine.

These cutscenes are worth paying attention to as it will give clues as to which ship to pilot for the carnage ahead.

One Ship or Two?

Talking of the craft you get to pilot you have a choice of two.

One is an airplane that kind of resembles a Bi-Plane from WW1 and is fast but lacks the air to ground punch of the airship that is larger (so attracts more enemy bullets) and is a bit slower but has more health to compensate.

We tried out both ships and we came to the quick conclusion that whilst some levels benefit from the airships ground weapon the Airplane is more fun and manoeuvrable in general and you can get through the levels that the but each to their own in this one.

The game sprites seem small but there is a reason for that, the bosses are in general, huge and are usually some kind of floating fortress or armored train of some kind although there is a wonderfully animated submarine in a later level that is a sight to behold.

Compared to other shoot ‘em ups the graphics do look pretty small and whilst early levels look ok, some of the later levels up the ante with some superb backgrounds and scrolling effects throughout the seven levels that Steel empire has. Overall it holds up well for being 25+ years old.

Sound is great on the game, the soundtrack that accompanies Steel Empire, from the cut screen music to each level is great and will keep you humming them along for days after.

Is Steel Empire worth playing Today?

The final boss seems to take about 20 minutes to kill with constant fully powered fire on but it is an enjoyable blast overall.

Check it out and give it some time, just start on easy to begin with to get a feel for it though as it does get pretty hard in places but you’ll have enough lives to make it through the game.

Finally, if you want the game and are having difficulty in getting it, its also available on the Nintendo 3DS. Go get ’em steampunk fans!

Steel Empire (1992) Megadrive Retro Review
Is it worth playing again?
Steel Empire / Empire of Steel is a great game that you'll have fun playing again especially if you're a fan of Shoot 'em ups.
Graphics
72
Sound
74
Gameplay
81
Classic Factor
70
Reader Rating4 Votes
88
Good Bits
The SteamPunk setting is awesome as are the cool cutscenes
Some rocking tunes to get you through the game
Bad Bits
Sometimes its hard to see the bullets from your ship
Some of the bosses get repeated
74
Retroheadz Score