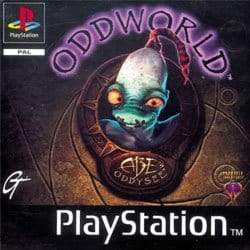 Back in 1997 a very special thing happened.

A game was released on the Playstation that seemed to defy the limits of the console.

Beautifully rendered, fiendishly difficult and with actual cinematic cut-scenes, this game caused a spate of bad impressions of it’s hero up and down the country.

Cries of ‘Helloo!’, ‘Follow me!’ and ‘Work!’ could be heard in every playground the length and breadth of the land.

It was, of course, Abe’s Odysee.

Created by Sherry McKenna, a special effects and CGI producer that worked on such cult classics as The Last Starfighter, Labyrinth, and Bill and Ted’s Excellent Adventure.

Alongside Sherry Mckenna was Lorne Lanning (of the same professions) who also voiced all of the characters in Abe.

They formed their own video game development company, Oddworld Inhabitants, in 1994.

Three years later, they gifted the world with the first of the inaccurately titled Oddworld Quintology (because there are currently four games in the set, with one of those not officially ‘canon’, and three more due for release.

More on that later, it gets a little confusing.

What’s Abe’s Odyssey about and what’s it like play?

Our protagonist, Abe, is a mild-mannered janitor at a charming meat processing factory called Rupture Farms, and also a Mudokon.

The Modokun are an indigenous people enslaved by the meat processing plants owners, the evil Glukkons.

During Abe’s routine duties he learns that the creatures farmed for the products made at Rupture Farms (Meeches, Scrabs and Paramites) are either extinct, or soon to be so.

He also learns that the Glukkons intend to begin making a new product: Mudokon Pops! This is the final straw for Abe, and he immediately sets about escaping and attempting to free the 100 of his people imprisoned and working around the facility.

To do this you play as Abe, and apart from the usual run, jump, climb paradigm that are the staple of every platformer, you have two extra mechanics at your disposal; Gamespeak and the Possession Chant.

Both of these serve to flip the traditional ideals of platform games, in essence swapping aggression for empathy, and it makes Abe’s Oddysee absolutely unique.

Gamespeak is a bank of words and gestures that allow you to command the enslaved Mudokons and enable their safe escape.

Abe can say ‘Hello’, ‘Wait’, and ‘Follow Me’, laugh, display anger, fart, and whistle. He uses all of these in increasingly complex ways, but it’s very difficult.

Players must be very careful not to run your countrymen into meat grinders, off of cliffs, through mine-fields etc.

Oh, and then there are the guards, horrible squid-faced creatures called Sligs, with robotic legs and machine guns.

That is where Abe’s final ability comes in most useful, the Possession Chant.

What does the Possession Chant do in Abe’s Odyssey?

This allows players to ‘Astrally Project’ and take over a Slig’s body, enabling access to area’s unreachable by Abe, or to force the Slig to kill his counterparts or destroy equipment.

The Sligs also have their own bank of commands which can influence and control their guard dogs (Slogs).

All of this variety gives rise to some insanely hard puzzles that require an awful lot of trial and error, but that are immensely satisfying when one gets it right.

The look of the game is absolutely superb, and holds up really well even by today’s standards.

Considering that it was written for the PS1, a 32-bit machine with only 2mb of RAM and a 16-bit sound card, it beggars belief that they produced Abe to run on it at all.

It is a stunning achievement with that level of technology.

Why is Abe’s Odyssey 2D when 3D was the in thing back then?

Lorne Lanning chose to develop the game as a 2D platformer.

He saw that the quality of 3D on the gaming systems at the time were poor, so his expertise went into pre-rendering 3D bitmaps because the unique look would distinguish them from all other games being produced in 3D at the time.

They used flip screens to make a flip book effect, with the pre-rendered bitmaps like digital paintings used as the background on each screen.

The results stretched the PS1 to it’s absolute limit but speak for themselves. It’s a truly beautiful game.

Oddworld Inhabitants have made several more interesting entries into the saga of Abe’s homeworld: Oddworld.

Not only are they all highly innovative games, some of them have been instrumental in pushing the art form forward.

They punctuate the journey of the dazzlingly gifted developers Lorne Lanning and Sherry McKenna.

We look forward to their future games with anticipation.

It all started with Abe’s Oddysee though, for our money a solid contender for one of the best games ever made for the original Playstation and thankfully Sony know this too as its included on the Playstation Classic.

OddWorld Abe’s Odyssey (1997) PS1 Retro Review
Is it worth playing again?
It peanuts to pick up and will give you hours of fun so yes, go get it on the original PS1 on eBay or opt for the PS4 for a modernised version.
Graphics
78
Sound
81
Gameplay
87
Classic Factor
90
Reader Rating2 Votes
88
Good Bits
It's still epic and so much fun to play today
Bad Bits
Has some really challenging parts in the game
84
Retroheadz Score