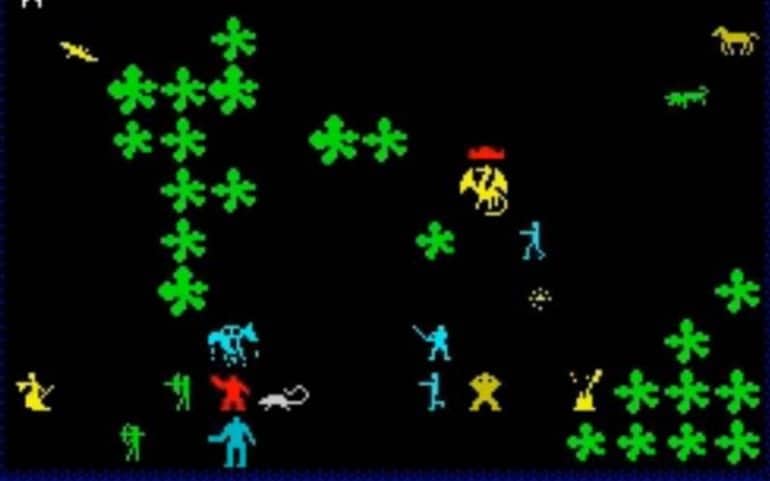 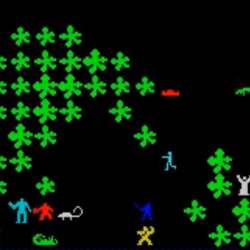 There are certain games in the history of gaming that are rightfully remembered as classics. There are other games that are somehow lost to the annals of time despite being great.

Chaos: The Battle of Wizards is one of the latter and frankly it deserves better.

Created By A Magical Pairing

Released in 1985 on the ZX Spectrum, Chaos: the Battle of Wizards was a very forward thinking game for its time.

How Do You Play Chaos: The Battle of Wizards?

Chaos is a turn based tactical game where one to eight, yes that’s right eight players, play as wizards facing off until only one is left alive.

This is done from a top down view with each wizard depicted by a different character.

At the start of each game the wizards are assigned a number of random spells, it is up the player to use these spells to the best of their ability to kill their opponents.

The spells were really clever. Whilst in previous games a battle would generally consist of a laser beam or bullet depicted by a line or dot moving across the screen Chaos brought these spells to life.

You could summons Dragons, Lions, Skeletons, Centaurs and any manner of mythical creature to act as your thralls. These all had different movement allowances and were all depicted by recognisable icons.

Even more advanced than these were spells like Fire or Gooey Blob which would spread across the board in random directions. These could often be just as deadly to the Wizard casting them as their nemesis.

All spells in the game are given Lawful, Neutral and Chaotic values which affect the whole game.

Keep casting Lawful spells and other Lawful spells become easier to cast and vice-versa. Neutral spells obviously don’t have an impact on this.

A Game Of Chance

One of the best twists in this game is the fact that all spells are given a percentage of likeliness to succeed. With this in mind you were also given the opportunity to trick your opponent by casting Illusions. These spells would work in the same way but were guaranteed to succeed.

That sounds as though it makes the whole system a moot point doesn’t it? Well, not really as your opponent can also disbelieve your spells, meaning that if they are indeed an illusion they disappear from the board immediately.

This gave the game an unprecedented level of tension as you prayed your friends didn’t think you were bluffing.

And herein lies the key that makes this an all-time classic. The multiplayer mode was incredible fun and would have groups of friends huddled around the screen for hours.

Up until online gaming the concept of having eight players in one game was extremely rare.

This was made all the more fun as, in order not to see your friends spell list, you all had to turn away whilst they had their turn. You all used the same keyboard by the way.

There was great satisfaction in disbelieving a friend’s spell and it tuning out to be an illusion, believe us.

What Else is There in Chaos: The Battle of Wizards?

So it was great fun to play, looked good for the time and was pretty advanced for a Spectrum game so were there any downsides?

To be honest, not really.

Obviously being on the ZX Spectrum the sound was nothing but bit-crushed bleeps and crunches which just ads to the charm as far as we’re concerned.

The added bonus to that of course is that classic “modem-esque” loading noise.

So, Should I Play Chaos: The Battle of Wizards?

If you have a ZX Spectrum and can find a copy.

Luckily there have been several ports to PC and there’s even a mobile version that is identical to the original.

We absolutely love this game, it’s still as fun an addictive now as it was in 1985 and that speaks volumes about its quality.

It doesn’t matter that the graphics and sound are extremely basic by modern standards the gameplay more than makes up for it.

This is a retro masterpiece that deserves to be remembered.

Chaos: The Battle Of Wizards (1985) ZX Spectrum Retro Review
Is it worth playing again?
If you’re a sucker for an addictive turn based classic then this should be your first port of call so get on it as soon as you can.
Graphics
70
Sound
60
Gameplay
93
Classic Factor
94
Reader Rating4 Votes
92
Good Bits
Addictive Gameplay
Multiplayer Greatness
Bad Bits
Hard to Find
Basic Sound
79
Retroheadz Score