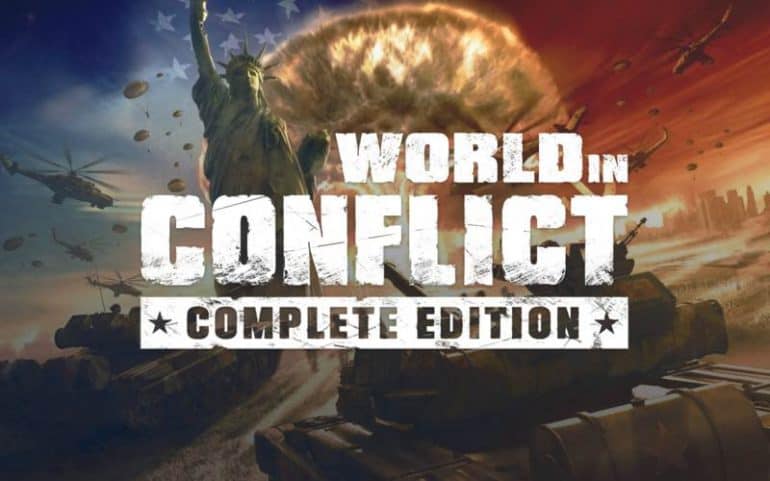 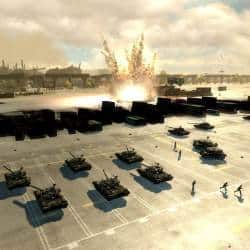 It moves away from the base building aspect beloved by fans of the RTS genre and is action orientated from the start.

It’s 1989 and World War 3 has been raging across Europe for months and is at a stalemate.

With the US focused on helping its NATO allies the Soviets carry out a surprise invasion of Seattle and gain a beachhead to invade the continental United States.

You get to see the war from both sides and take part in battles that range from cities to farmland and even head back to Europe with an arsenal of real-world tanks, helicopters and artillery at your disposal.

The story itself is driven by cutscenes that tell it from both perspectives and is narrated by the gravelly voiced movie star, Alec Baldwin.

The storyline is massively polished and feels like you are playing out a Tom Clancy technothriller.

If you’ve played End War then you’ll find this far more satisfying to play and far more compelling to follow and see through to the end.

As mentioned, the way the game plays out is more tactical then your typical base building RTS like Command & Conquer.

In World In Conflict you have objectives that need completing before you can head off to the next phase of the battle such as retaking a village or holding off a massive counterattack to recapturing abandoned equipment in the field.

It has a huge amount of variety and if you lose a unit you can call in replacements but only when you have enough credits to request an airdrop.

This delay encourages you to look after your units where possible although you can repair them in battle with a repair vehicle which is recommended to have and keep protected on most missions.

Being the complete edition you get to play both sides and see the different perspectives and it seamlessly shifts between the US and Soviet missions.

Units in World In Conflict

World In Conflict is based firmly in reality, an alternative one for sure.

However, because of this emphasis on realism the units you have at your disposal are real life ones.

You get to build up formations of Abram tanks of Apache gunships and armoured personnel carriers and each unit has its primary weapon and also a secondary special weapon such as anti-tank missiles to help you dispatch the enemy in game.

These special weapons will be used throughout and can be game changers if used at the most opportune of times but you have to be careful as they take a while to recharge to use again which adds a further tactical element to the game.

One of the coolest things about World of Conflict is the ability to call in fire support when things get hectic.

On the top left of the screen is a menu that depending on the mission you’re playing will include dropping artillery rounds, napalm and calling in an A-10 Tank Buster to come and spit out a heavy dose of death from above on the approaching tank and troop formations.

My favourite though is calling in a B-52 to carpet bomb and area. The damage it does is insane and looks awesome.

The only gripe I had and it’s a small one is that it can be a bit fiddly to precisely line up where you want a napalm or tank buster strike.

It’s a small issue and you do get used to it after a while of playing but at first it’s a tad annoying and can cause friendly fire casualties when fighting up close.

Does it still look good?

World in Conflict came out in 2007 but it still looks stunning.

The difference is today you don’t need a beast to run it.

We tested it on an i3 Laptop and it ran it with ease and had no issues at all except in the cut-scenes where the dialogue went out of sync with the on screen movie.

It was a small issue for us but it might not affect more powerful machines.

The sounds effects in the game are great and add to the chaos that is war but it also has things like bird song during the lulls of combat in the countryside or civilians screaming and panicking in the cities and towns to the distant rumbling of skirmishes happening elsewhere on the battlefield.

This is on top of the excellent in-game dialogue from the various characters that you meet in the game and is well acted.

Everbody Wants To Rule The World

The music in the game is orchestral and when the action is about to commence becomes foreboding and is a cue for you to get ready for the chaos that’s about to come your way.

Oh and one more thing with World of Conflict, it has Tears for Fears’ ‘Everbody Wants To Rule The World’ featured throughout which gets it extra bonus points of awesomeness in our book.

Is World In Conflict worth playing today?

If you’re a fan of RTS games you will love it still and it so worth playing again and costs under a tenner to buy today.

For those that love story driven games you’ll find this compelling, especially if you like alternative history stories.

It looks great and is accessible even for those that aren’t a fan of the RTS genre.

You’ll sink a lot of hours in the single player campaign which is long but never to the point of it getting boring due to the variety of missions and locales they are in.

It’s not overly difficult, although it has its moments and the user interface is intuitive and accessible to use during the most hectic of engagements.

Just remember to save the game after each element in a mission is completed otherwise if you fail, you’ll have to start from the beginning of the mission again.

If you played this game when it first came out then its well worth a revisit and if you never have its cheap enough to buy and sink some time into this highly realistic cold war based RTS.

Your Thoughts on World In Conflict

Do you remember this game? What did you like about it? Let us know in the comments below and add your score below too.

World of Conflict: Complete Edition (2007) PC Retro Review
Is it worth playing again?
World In Conflict is stunning and compelling throughout and for under £10 is worth getting and playing again.
Graphics
92
Sound
90
Gameplay
90
Classic Factor
87
Reader Rating4 Votes
90
Good Bits
Fantastic story
Looks amazing still
Bad Bits
Cutscenes out of sync with dialogue occasional
Camera can be a bit fiddly especially when using tactical strikes
90
Retroheadz Score