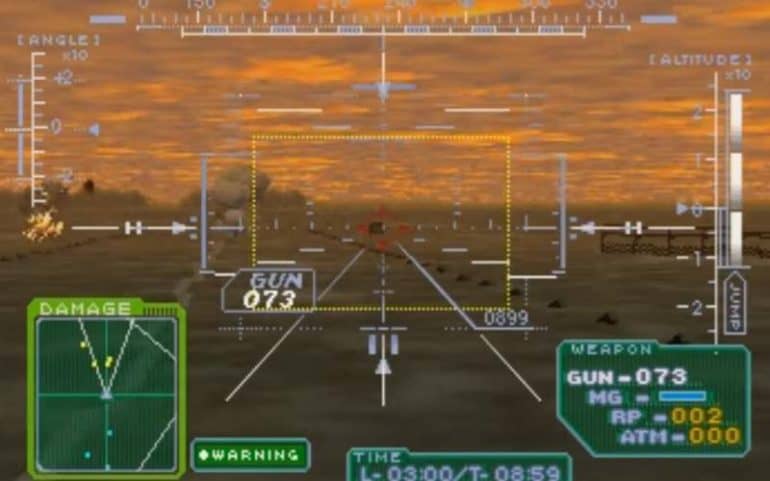 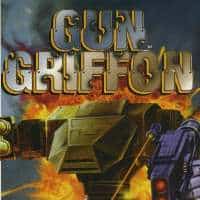 Gungriffon is a 3D shoot ’em up that came out back in 1996 for the Sega Saturn and was made by Game Arts who have a history of making awesome 3D games such as Silpheed which came out to much fanfare on the Mega CD a few years earlier.

The game is set in the late 21st Century and blocks of nations fight it out for the last remaining natural resources to keep their war machines rolling.

Gungriffon is the name of the giant Mech you control to take on the various factions across the Pan Asian region and go up against other giant Mech’s and more contemporary military hardware from the early 21st century with the aim of securing peace and prosperity once again.

From the get go the game drops you straight into the middle of the action where your Mech is delivered by plane to the green pastures whereupon you go on a search and destroy mission which is a perfect way to start getting to know the controls and weapon system available for you to use throughout the game.

The controls feel like a first person shooter which in a way it is as you use your radar to locate enemy combatants and then swiftly fire your cannons and turn them to much smaller and far scattered chunks of metal.

All the action is viewed first person style with a HUD which has heading, weapons load and a radar of targets to reach.

The game progression is spot on with detailed mission briefs and a nice variety of missions including dusk and night time assaults where the use of night vision gives it a haunting green glow as you engage the enemy by jumping across rooftops and tight streets to full on battlefield romps that have a deep sense of urgency to the proceedings as it’s always against the clock.

It’s a very well made game and feels right at home on Sega’s 32-Bit wonder machine.

The Saturn may not have been a master of polygons like the Playstation was back in the day but Game Arts have done a really good job of conveying a world on the brink in chunky and solid polygons.

The games impressive draw distance actually adds an element of surprise and foreboding that keeps players on their toes and the enemy vehicles, helicopters and Mechs look pretty cool even today.

The game also adds in different weather in to the mix which gives it a depth as you have to adjust your approach and is a really nice touch as you progress through the Russia and Asia.

The sound effects are nice and chunky with heavy cannon blasts and so on and the bleeps and warning tones you’d expect to hear from a mid 21st century giant Mech.

Gungriffons music is OK to be fair.

It mostly has a serious tone in the levels and it has a mid 90’s Sci-Fi feel to it.

Is Gungriffon Worth Playing Today?

Yes it is, however, it’s much better if you can get hold of a Saturn 3D Controller.

You’ll find it really good fun and challenging in all the right places and if you’re a fan of games like Mechwarrior and giant robots in general then you’ll love it.

The game has a charm and vibe about it that shows that yes it is a product of its time but one that if you can slip your mind back to the mid 90’s will feel fresh and fun throughout.

Getting hold of Gungriffon means you will need a Saturn as it’s only on this system and prices do fluctuate for it on eBay but its a keeper and one to come back to.

In fact we’d go as far to say its a hidden gem that any serious Saturn collector should have. There was also a 1998 sequel but that only came out in Japan but as we know by then in the UK the Saturn was sadly gone or was sitting in bargain basement bins in game shops.

The only other way to make it more fun is to get a cheat for unlimited ammo and use your cannon like a machine gun which is extremely satisfying. In fact is a marvellous stress reducer so try it if you can.

One things for sure Gungriffon is one to get hold of and see to the end if you can. It’s awesome!

GunGriffon (1996) Sega Saturn Classic Review
Is it worth playing again?
Gungriffon is a wild blast and one that will make you think 'hmm, the Saturn did do 3D well' Add it to your collection and have some big Mech action!
Graphics
89
Sound
86
Gameplay
88
Classic Factor
78
Reader Rating4 Votes
89
Good Bits
Shows off the Saturn's 3D abilities brilliantly
Tons of atmosphere
Bad Bits
Does get difficult in places
It's a little bit choppy in places
85
Retroheadz Score