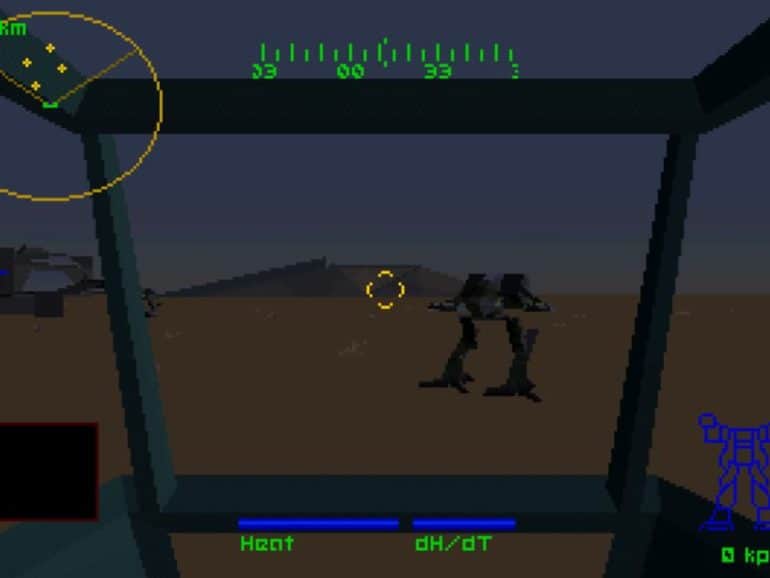 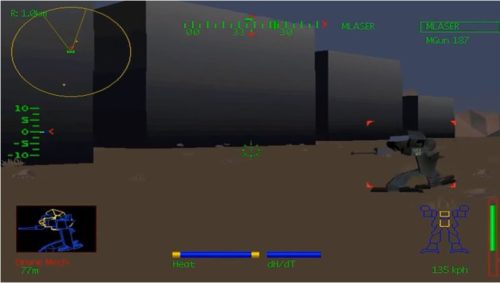 Mech Warrior 2: 31st Century Combat was released on PC by Activision way back in 1995 and became an instant classic among gamers who were blown away by its depth and playability.

At its core Mech Warrior 2 is essentially a shoot ‘em up. The aim of the game is to control your Mech and destroy all those that stand in your way.

As you start the game you have to choose a clan, either Clan Wolf or Clan Jade. The two are locked in a war in the year 3057 known as the Refusal War and, like all conflicts; they are hell bent on each others destruction.

Your next task once you’ve chosen a clan is to enter the Mech Lab were you will be introduced to your fighting machines. The Mechs themselves are reminiscent of the AT-ST from Star Wars, huge bi-pedal fighting machines that can be customised with different weaponry, armour, engines and heat sinks.

Once you have chosen your Mech you enter the “arena” to be faced with a 3d landscape filled with blocky buildings, hills and impressive skies. It takes a while to get used to the physics but once you do you’re finding your way through the mysterious landscape, checking your radar for your foe.

One thing that instantly strikes you is the unique view, looking out from the cockpit of your Mech, complete with a huge array of information such as Radar, detailed Mech condition reports and even engine temperature, something that is vital to the game. Overheat your engine and its bad times all round.

A really nice touch is the ability to switch your view between a standard and an infra-red view, allowing you to seek out your prey when they’re behind structures, something that was streets ahead back in ’95.

When you do finally find your target the combat is impressive and really fun, destroying your target is made all the more satisfying with the addition of some almost video graphics level explosions.

The game is highly addictive but it really comes into its own when played on multiplayer mode, that’s right you can play this online. Most likely back in the day you would have played this on a local network, spending hours chasing your friends down and trying to blow them to pieces.

Something that really sets this game apart is massive attention the developers spent on the details. Back story for the Clans and the history of the war is insane; there are pages and pages of text about each individual element of the conflict as well as the different weapons and Mech modifications. The cut scenes are impressive even by modern standards and the intro is up there with the best.

The game has a genuine feeling of continuity, something that games designers still struggle with today. It’s this feeling of really being a part of the war that keeps you interested for hours on end.

Now by modern standards the graphics aren’t great but at the time they seemed really impressive, especially as the games industry was finally making some decent strides in 3d architecture and gameplay.

The controls are pretty smooth and as mentioned previously this is still great fun to play even now. The sound design is also pretty decent with good laser sounds and commands from your superiors which actually don’t get annoying like a lot of games.

If you enjoy fighting with massive robots, retro graphics and were a fan of Titanfall, which is surely its spiritual descendant, then you should definitely give this game a go, we don’t think you’ll be disappointed.