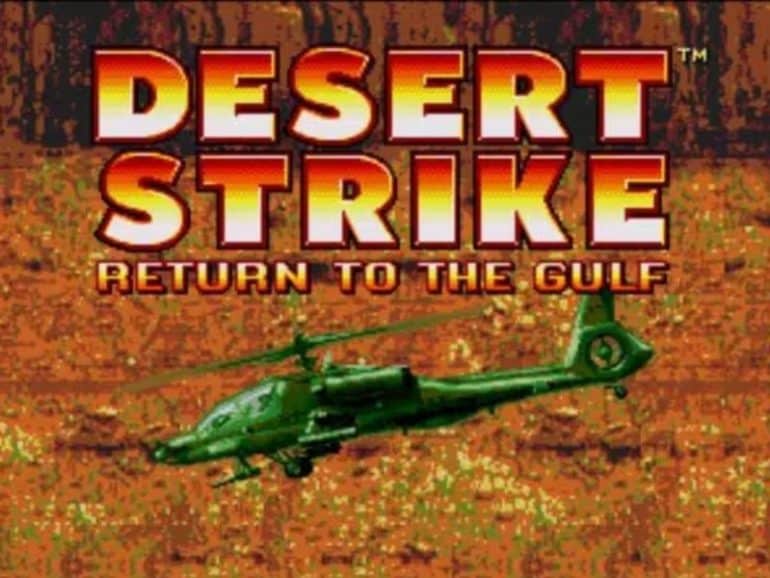 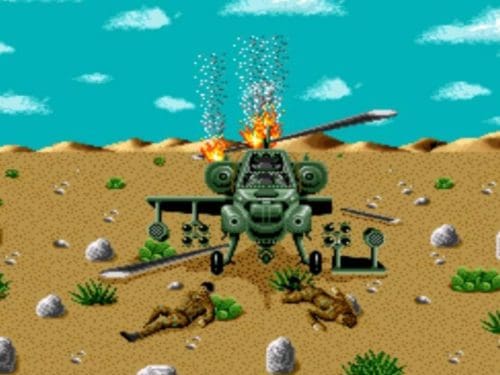 Desert Strike is an isometric shooter initially released on the Sega Megadrive/Genesis back in 1992.

Now given that at the time most shooters of the day were space based affairs, battling hordes of attacking alien space ships, Electronic Arts placed their game firmly in the real world.

Desert Strike is set in the middle east.

An evil dictator, General Killbaba has invaded a neighbouring country and it’s up to you in your trusty Apache gunship to drive his forces out, reduce his weapons of mass destruction to mere atoms and gain control of the small countries oil fields again.

Hmm, sounds very familiar doesn’t it to some real life events from the time doesn’t it?

Well, it should do as Desert Strike may have been influenced by the Gulf War in some aspects as this was the first real televised war which everyone back then, young and old witnessed on a daily basis.

So there’s the setting, now on to the game itself.

After the heavy metal intro and you’ve gone through the options screen where you can  choose your co-pilot, the game starts out with you being briefed by a facsimile of a certain general from the real war.

After this you’re on your way, taking off from your home Frigate which is just off the coast of the under siege country.

Pressing start brings up your HUD where your map is along with the objectives that you need to complete in order to do the next one.

First off is the radar bases and then the power station, followed by the airfields so that you can knock out Kilbaba’s air-force and then you need hunt out the enemy commanders to gain the whereabouts of a spy who’s being interrogated in a building somewhere on the map.

Sounds simple and yes with practice you can rush through the missions pretty quickly but the game has quite a few surprises along the way.

For starters you can literally blow up anything on each level, from patrolling enemy jeeps, soldiers taking potshots at your chopper and tanks that require a hefty dose of missiles to defeat to buildings whereupon if you’re lucky some hidden fuel or ammo stores will show themselves once the dust has settled.

The stores of ammo and fuel you find are vital for good reason.

Compared to most games of the era, you have a few lives, unlimited ammo and once you die…you die.

Desert Strike is different and takes a more strategic approach to proceedings.

Your Apache has a limited amount of ammo.

There’s plenty of bullets for the chain gun, a medium amount of more powerful but unguided hydra rockets and only eight hellfire missiles that do the most damage so you’ll need to find ammo, some of which is on the beachhead where some U.S forces are stationed along with fuel which is the lifeblood of the game.

In the early levels, there’s plenty of ammo and fuel available on the map sitting there in the open and lightly guarded too. Later on, it’s sparse so you’ll have to start shooting buildings up to see what’s in them.

You will also get shot at, a lot.

You have quite a bit of armour but it will need replenishing so how do you go about this?

You can carry up to six passengers in your helicopter (a nice bit of creative licensing there) and when full you can drop them off in one of the designated landing zones where your brothers in arms are.

Each dropped off allied soldier or POW replacing 100 points of armour for you and becomes a vital and strategic part of the game.

The game itself still holds up well today, more so than later games in the series such as Soviet Strike on the Sega Saturn and PS1 as the graphics are still crisp and bright.

The game is in its way, one of the first open world sandbox style games so there’s plenty of exploring to do and for those with destructive tendencies there’s so much that you can shoot up above and beyond the game’s main objectives.

Sound wise the explosions are meaty and music only happens in between levels and to be honest, doesn’t need it during the game as an in-game soundtrack would detract from the general atmosphere that the game eschews upon you.

The presentation in Desert Strike is slick, long before cut-scenes became a standard feature in modern games, Desert Strike had a fantastic intro as  where you got filled in on what’s happening in Killbaba’s bunker in between levels.

They set the scene well and compliments the game with its, for the time, lifelike digitised graphics (this was a big thing back then!)

Later levels really up the ante as well.

The difficulty curve in Desert Strike is firm but fair, the game never cheats you and you’ll know when you’ve screwed up.

Overall if you used to play this it worth dusting off your Megadrive and giving it a blast. You will have fun.

If you’ve never played it, you definitely should.

Desert Strike is also available on the SNES, Amiga and a myriad of other systems.

However, the Megadrive version of Desert Strike is the original and best still so go forth, get to da chopper and go and give freedom to a small yet oil rich ally.

If any retro game deserves a next-gen, HD update then Desert Strike would be a good contender.

Desert Strike (1992) Megadrive Retro Review
Is it worth playing again?
Desert Strike is still great fun to play. A thinking persons shooter that is fun and challenging and well worth picking up especially the Megadrive/Genesis version as its the original and best.
Graphics
78
Sound
60
Gameplay
90
Classic Factor
85
Reader Rating5 Votes
88
Good Bits
There's so much to do, missions are varied and fun
Blow up pretty much everything
Bad Bits
Rescuing POW's can get a bit repetitive
The sound of the choppa will haunt your dreams
78
Retroheadz Score