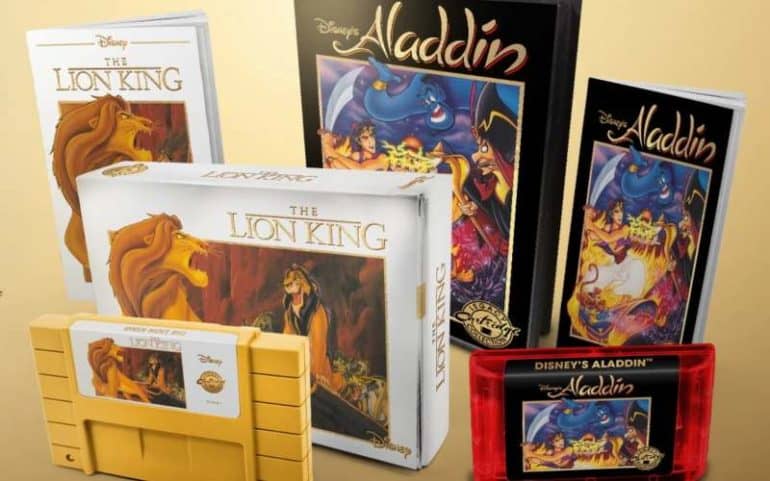 Aladdin and The Lion King are hot topics right now what with the recent live action versions that have come out.

They also had great game versions of the original animated movies that were snapped up by many a Mega Drive and SNES owner back in the 90’s.

iam8Bit and Nighthawk Interactive have created collectors editions of these classic games.

Here’s what we know.

The Mega Drive version of Aladdin comes either in a ruby red cartridge or a glow in the dark Magic Carpet purple and is limited to 4,500 copies.

It also comes with a box with restored artwork and a full colour manual.

The Lion King for the SNES comes with a bold Mufasa Yellow cartridge or a translucent Serengeti sunrise colour.

The Lion King will also come with a full colour manual along with restored artwork and a custom dust cover and again.

Just like Aladdin for the Mega Drive it will limited to 4,500 copies and comes with a special fold out box.

PAL users will need a converter as it’s a US cartridge shape to play it.

How Much Are They?

Here’s the rub. Both games are up for sale for $99.99 each which seems quite steep for old 16-Bit games but these will probably sell out quickly due to their limited run of copies.

Also you don’t get to choose the cartridge colours as these are randomly selected and they state that you’ll have a one in eight chance of getting either the glow in the dark version of Aladdin for the Mega Drive/Genesis or the Serengeti Yellow for The Lion King on the SNES.

The games are for sale direct from the iam8bit website and pre-orders are being accepted from the 24th October 2019 with a delivery expected in early 2020.

So, if you want it you better hurry as they could be gone before you know it and perhaps they could also do reissues of other awesome Disney titles like Quackshot and Castle of Illusion.

New Book is a Must Have For Master System Fans