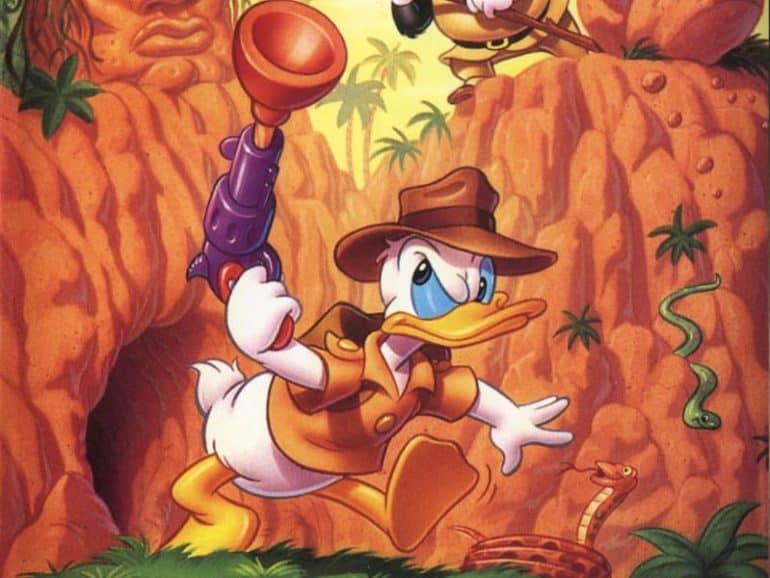 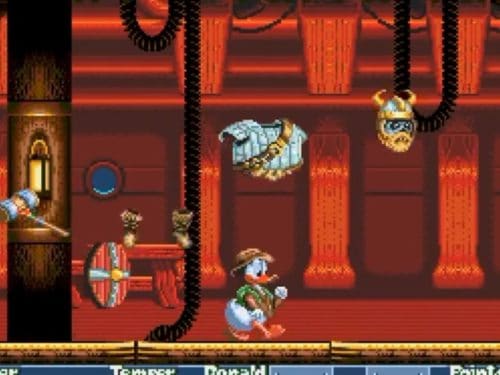 Quackshot came out on the mighty Megadrive back in 1992 and is usually overshadowed by Disney’s chief mascot, Mickey Mouse in Castle of Illusion.

However because of this many may have missed out on this classic platformer which starts off simply enough but gets pretty tough later on.

For those looking for a challenge that’s fun and fair then Quackshot is worthy of your time.

What’s the Story in Quackshot?

Quackshot starts off with a nice intro that gives the buildup to Donalds Adventure.

In a nutshell he finds an old treasure map to the treasure of King Garuzia in Scrooge McDucks library and Pete’s Gang are spying on you whilst your reading it.

So Donald makes a break for it and flies off in his nephews aeroplane to start the adventure that your about to embark on.

You start off in Duckberg which has a main street USA kind of feel to it.

You get to familiarise yourself with Donald Ducks moves and is fairly simple and fun with music that will keep you humming all day as well.

In this level you also get to pick up chilly peppers and once you’ve consumed enough Donald goes in to a fit of rage which makes you invincible.

This is a great thing to have but from what I remember it was hardly available in the game which is a shame as it could have come in handy later on.

When you get to the end of the first level you find that you can’t go any further so you have to call the plane (piloted by Huey, Duey and Luey) and go to the Indiana Jones style map and head to Mexico.

Once you’ve done this level you have to go back to Duckberg and retrieve the Hero Key to go any further in Mexico.

It’s a fun touch to have to complete one part of a level and then do another part of another level to be able to continue with the previous one.

Donald collects some serious air miles in Quackshot that’s for sure.

Donald has a host of gadgets in Quackshot to help him on his way.

His default weapon is his trusty sink plunger which is great for stopping enemies but that won’t be enough as you’ll need to upgrade and get the sticky plunder that lets you climb up to previously inaccessible place.

You also get a Bubble Gum gun in Quackshot but our favourite has to be the Pop Corn gun, however make sure to stock up on the kernels though as once you finish the Transylvania level the previous locations where it was available (Hint: Mexico) is no longer available to go back to and get so easily.

Later levels include India where you battle a tiger to help out a princess and a viking ship where you take on viking ghost all the way through to the finale.

The graphics in the game still look great today. Disney games on the Megadrive did have a lot of effort put in to this side of things game like Mickey Mouse Castle of Illusion and later on Aladdin and the Lion King prove this and Quackshot is a sight to behold.

The sound is great as well. Loads of tunes that you’ll be happily humming for days after and they hit the spot perfectly with a Calypso style for Mexico and Spooky music for Transylvania it all fits in nicely.

The only gripe about Quackshot is that it does get more unforgiving the further you get but once you play it a couple of times you’ll really enjoy it.

It just takes some time to get used to it.

But its the game play that really shines.

Quackshot does get hard but if you see it through you’ll have a big beaming smile on your face and rightly so, its awesome.

Its a play on Indiana Jones and its all the better for it and one that any Disney fan needs to have in their collection or at the very least play it.

Quackshot (1992) – Mega Drive Retro Review
Is it worth playing again?
Quackshot is a great game that has stood the test of time quite well. It bright, colourful and is really good fun and has tons of atmosphere. It does get harder later on though so stock up on the extra ammo.
Graphics
90
Sound
85
Gameplay
90
Classic Factor
80
Reader Rating6 Votes
86
Good Bits
It looks amazing as you would expect for a Disney game.
Loads of levels and great fun to play.
Bad Bits
It gets really hard later on so can get frustrating
86
Retroheadz Score