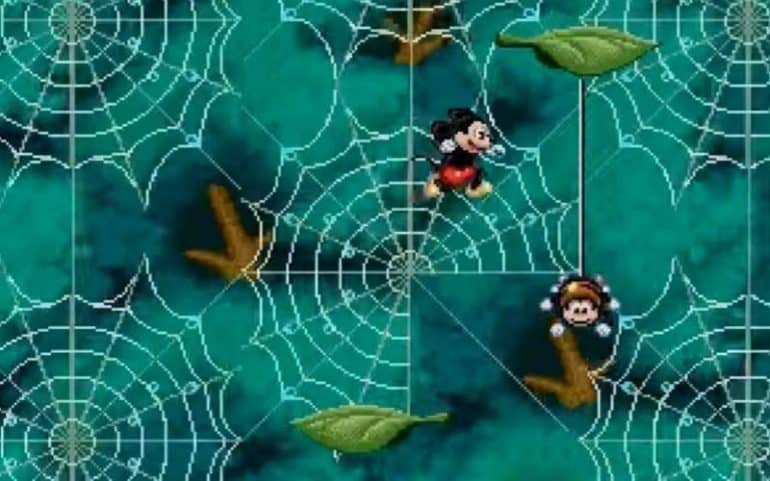 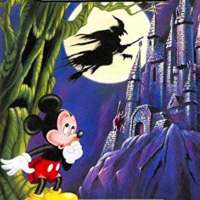 In the early days of the Mega Drive’s life one game was pivotal in showing off Sega’s 16 Bit console and that game was Castle Of Illusion.

Castle of Illusion was the first game on the Mega Drive to feature Mickey Mouse and paved the way for other Sega/Disney collaborations such as the fantastic Quackshot and World of Illusion a couple of years later.

However, Castle of Illusion was at the time one of the best looking games out there and thankfully it was just as much fun to play as it was beautiful to look at.

In a nutshell Minnie Mouse has been kidnapped by the nefarious witch Esmerelda and it’s up to you as Mickey Mouse to enter the Castle and rescue her as any good boyfriend would do.

All this is presented in a great little intro that set the stage nicely for what’s to come.

The game starts off with a jaunt through the woods and it straightforward platform game fare.

The first level is where you familiarise yourself with the controls which are simple and precise and you’ll also get to jump on a few heads of errant creatures and what look like possessed saplings as you get on your way to the first boss which is a giant tree which is pretty easy to beat.

Later levels include walking upside down in a crazy toy land, evading happy looking spiders and even swimming underwater which has a familiar Sonic The Hedgehog feel about it.

As the game came out before Sonic you can see that this title might just have influenced the game design of Sega’s blue mascot.

There’s even an Indiana Jones moment where you have to evade a giant red apple that’s chasing Mickey down a slope.

Even facing off against Esmerelda at the end whilst Minnie Mouse is trapped in a bubble is fairly simple to defeat.

Does Castle Of Illusion Hold Up Today?

Castle of Illusion is a classic slab of Sega history, it looks great still for a game that is close to 30 years old and the sound is awesome.

Whilst much better platform games came out later on the Mega Drive it still holds up well today.

The pace is not too quick although there are speedy moments and the presentation is slick as can be for such an old game.

For Sega and Disney fans this should be at the top of your retro gaming list to play all the way to the end.

With the arrival of the Mega Drive Mini you’ll be able to play it once more and enjoy this classic and fun Disney based classic.

Your inner child will thank you.

Castle Of Illusion (1990) Mega Drive Classic Review
Is it worth playing again?
Castle of Illusion is fun, looks great and holds up well nearly three decades after its release. Go back and have a nostalgia filled trip and see for yourself.
Graphics
89
Sound
85
Gameplay
85
Classic Factor
90
Reader Rating4 Votes
91
Good Bits
Slick presentation throughout
Fun from start to finish
Bad Bits
It's not that much of a challenge
Animation a bit dated
87
Retroheadz Score