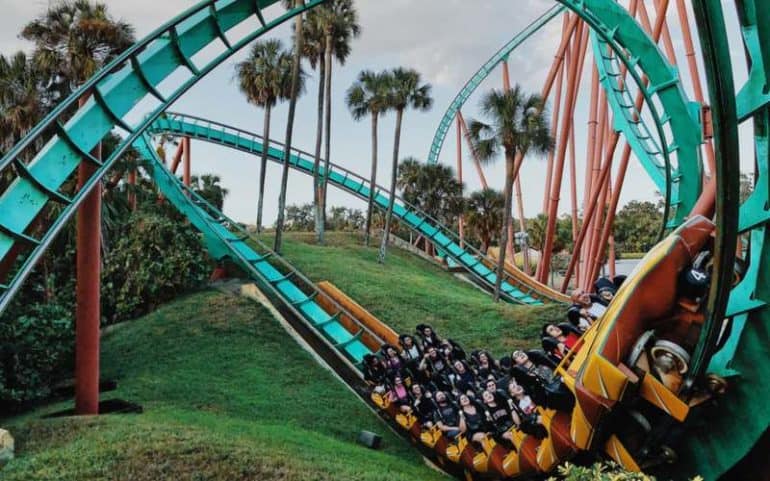 After its original opening in 2010 the park had to add trim brakes to the initial 300ft drop to regulate the speed as guests were greying out due to the intensity of the transition from the drop into the first turn.

During the 2010 close season the first turn was redesigned allowing the trims to be removed and return the ride to it’s original speed of 90mph.

Skyrush at Hershey Park is an Intamin wing coaster located in ‘The Hollow’ section of Hershey Park has a height of 200 feet and a top speed of 75mph.

Opening in 2012 this bright yellow mass of steel does however have a reputation of being a tad uncomfortable, but don’t let detract from this being a must ride bucket list coaster.

Consistently placing in the top echelons of wooden coasters throughout the world since it’s inception in 2006 The Voyage roller coaster has a whopping 6442ft of track.

Once embarked on their journey riders will experience 24.3 seconds of airtime (the most airtime of any wooden coaster to date).

Along with the airtime The Voyage also boasts five underground tunnels which riders will experience as the train plots it’s way around the course.

The tallest roller coaster in the world standing at an incredible 456ft tall, Kingda Ka launches guests from 0 to 128mph in just 3.5 seconds.

Taking just 28 seconds to complete the course this Intamin accelerator is a pure rush from start to finish.