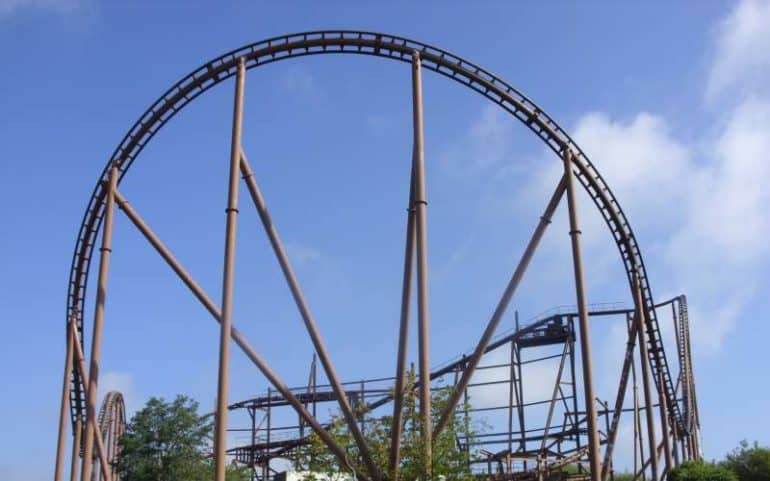 Over the years we have been well and truly spoilt with what we have on offer within the UK theme park industry, with new rides and upgrades to existing rides constantly being added.

However this does come at a price and that price is the loss of some of our most loved and cherished attractions from our childhoods.

Sometimes it can be from the closure of their actual theme park or being demolished to make way for something shiny and new, there are many lost rides that we will never see again.

Here we will look back with fond memories of what once was.

We’ve included some nostalgia inducing point of view videos where possible thank to YouTube so you can experience them once again.

Opened in 1980, by the time of its removal in 2008 Corkscrew had many die hard fans, although in it’s latter years the ride had become increasing rough and uncomfortable.

Corkscrew was located within UG Land at Alton Towers.

This two inversion coaster manufactured by Vekoma was synonymous for its double corkscrew and bright yellow track, Corkscrew would be demolished to make way for Thirteen.

Was it a worthy upgrade? Or do we wish Corkscrew was still standing?

This Mack rides master piece stood tall at 16m and featured a double dip on the second splash down.

When Loggers Leap opened in 1989 it would be the UK’s tallest log flume, consisting of 2 large drops. The first of which was taken inside a tunnel in complete darkness

The tunnel was removed in 2013 due to poor structural maintenance over time and eventually in 2015 the ride was closed for what was hoped would be a full refurbishment.

However in 2019 Thorpe Park announced that Loggers Leap would not return and the site where it once stood had been earmarked for future development, so watch this space…

Although the original ride system and building are still in use to this day we’ll never again get to take a watery tour around Prof. Burp’s magical fizzy pop factory.

Running from 1990 – 2005 in it’s original guise Prof. Burp’s was a main attraction for both children and adults alike.

The ride building and system were used to create The Gruffalo River Ride Adventure for the start of the 2017 season and is still running to this day.

This Schwarzkopf Jet Star 2 Coaster was set inside a giant black tent located in the X-sector area of Alton Towers. Closed in 2005 to make way for the Smiler, Black Hole was a well loved and popular attraction.

Since it’s opening in 1984 Black Hole underwent several changes including modification on the bottom of the first drop and in 1988 the ride was dismantled, sent to Europe where it received an overhaul to accommodate dual-car trains.