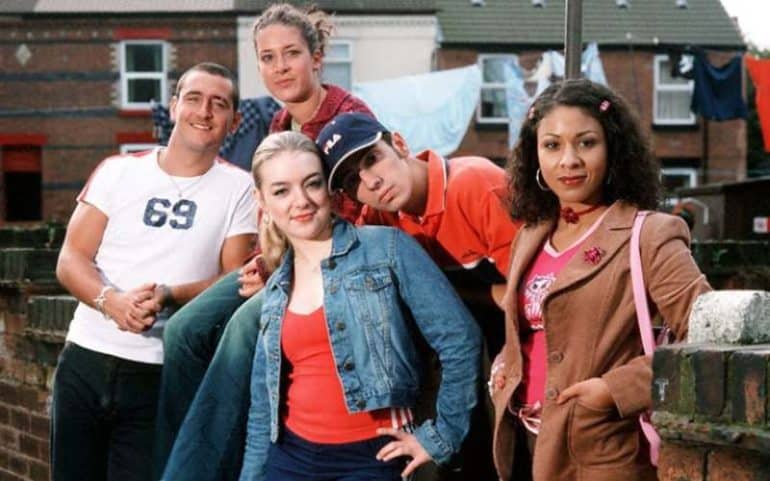 Two Pints of Lager and a Packet of Crisps aired on the BBC and quickly became cult viewing in the UK.

Around the turn of the millennium, a number of British sitcoms came around that changed the landscape of the TV schedules.

Two Pints was something different from the often intellectual and surreal comedies of the time and it gave a glimpse of what was going on in the real world.

What Was Two Pints of Lager and a Packet of Crisps About?

Two Pints, as it was commonly known, was aimed squarely at the typical 18-30 year olds of working-class Britain.

It followed the lives of a group of friends and their generally mundane lives as they got drunk, hooked up and looked for work.

Set in the town of Runcorn in Cheshire it depicted a run down and thoroughly realistic setting which went against the trend.

Typically your mainstream comedy shows at the time revolved around middle-classed families or rich eccentrics.

The main characters in the show were your typical lads and lasses about town at the time.

Who Were The Main Characters?

Jonny (Ralf Little) is a kind and caring guy with a fetish for Jammie Dodgers. He secretly loves Titanic and is unemployed for the entire duration of the show. Jonny loves Janet and especially the egg buttys she makes him.

Janet (Sheridan Smith) is a fairly simple girl who likes her home comforts. These tend to be mainly alcohol, cigarettes and Rich tea biscuits. She works in a bakery until she becomes Manager of their local pub The Archer.

Gaz (Will Mellor) is a typical alpha male and womanizer who makes up for his lack of intelligence with his looks and muscles. He’s a Mechanic at his fathers’ garage and He loves Beer, Sex and Hollyoaks. Gaz goes out with Donna who manages to keep him in his place most of the time.

Donna (Natalie Casey) is a modern woman who was career-driven and sexually open. She has a number of jobs which she tends to lose by being too mouthy. In fact, being mouthy and brutally honest is her main character trait.

Louise (Kathryn Drysdale) is a childish wannabe socialite who claims to be a Sociology student but turns out to be a trainee Social Worker. She always acts like she’s above the others although is arguably the least intelligent of them all.

In addition to these characters, there were some great recurring characters including Munch who is Gaz’s half brother and completely dim-witted.

Cassie who worked behind the bar in the Archer and was completely insane, Flo who was Donna’s overly sexual mother and Tim the Landlord who’s obsessed with John Barrowman.

What Made Two Pints Different?

Two Pints never talked down to its audience and it created characters that you could identify with. We all knew someone who was exactly like every single character.

In many ways this was the UK’s working-class answer to the huge US sitcom and if we’re completely honest we probably prefer it for that reason.

The situations were completely relatable and it painted a cynical if not completely realistic view of the country at that time.

Its real triumph, of course, is the fact that it managed to turn these fairly grim surroundings into something laugh out loud funny.

Whilst it may have been easy to judge the characters we saw through their flaws and followed them like they were our own mates and that’s what the best Sitcoms manage to achieve.

How Long Did Two Pints Of Lager And A Packet Of Crisps Run For?

Two Pints started in 2001 and ran for a total of nine seasons before coming to an emotional close in 2011.

Will Mellor recently stated that the show would return for a one-off episode in 2019 although it is yet to surface.

He also stated that Ralf Little would return to the show, which he quit after season 6.

So, Is It Worth Revisiting Runcorn?

If you’ve never seen it then we definitely recommend that you give it a go. It’s a genuinely funny and heartfelt sitcom that’s totally binge-worthy.

If you watched it the first time around then you probably already know it’s worth watching again so why not do it.

Two Pints of Lager and a Packet of Crisps is available to watch now on the BBC iPlayer.