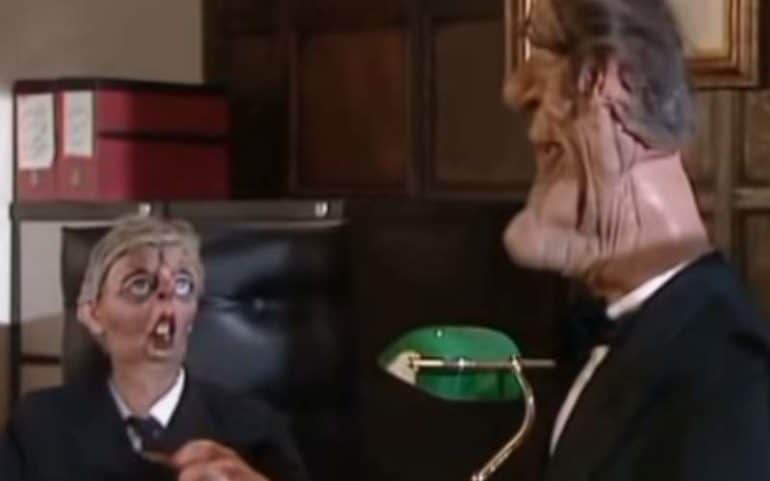 By Ian Lydon-James
In Television
on September 29, 20191 min read

The show which first aired in 1984 and ended its original run in 1996 is currently being made and given the current WTF climate the return should be a welcome one.

Who’s Getting The Puppet Treatment?

The new version of Spitting Image will have a whole host of current celebs and politicians who will be featured including politicians, Donald Trump and Vladimir Putin among royals (Harry and Meghan wearing a ‘Princess’ t-shirt) to Facebook’s Mark Zuckerberg and Kanye West getting the satirical treatment that will provide comedy relief to many who will be watching it.

The Puppets look spot on and as in the past iteration of Spitting Image will tap in to all the stereotypes that made previous depictions of the people of the time i.e. Ronald Reagan, Margaret Thatcher and even a very grey pea eating John Major bring some equally satirical aspects to the burgeoning stories and happenings of today.

Will It Be The Same?

Naturally social media has been pretty hot on this topic since it was announced with many hoping it won’t be watered down to cater for those that never saw it, or got it the first time around.

Time will tell on this one and we for one hope it is just as funny and relevant as when it first aired but one things for sure, after a 23 year gap since it left everyone’s telly screens it will great to see what was one of the most watched satire shows back on everyone’s TV screens once more.

The pilot episode has been reported to already be made so as to when it will grace everyone’s screens again is not certain but hopefully sooner rather than later.

Your Views on Spitting Image?

Will you be watching it? Let us know what you think of a new series of Spitting Image in the comments below.