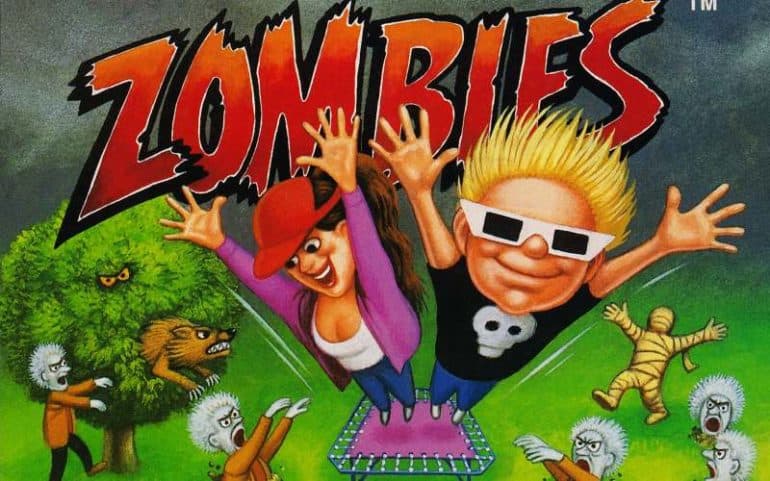 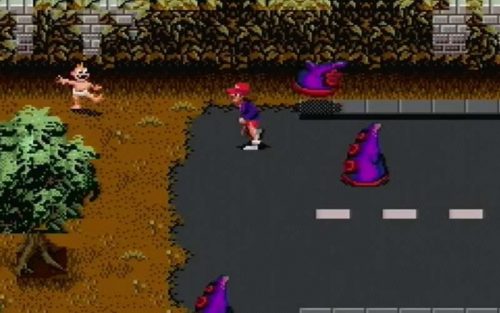 It was developed by LucasArts and published by Konami and was met with excitement at the time.

It took the dungeon crawling aspect which was until then reserved for games like Gauntlet and brought it bang up to date into a world we were all familiar with, small town USA.

Instead of Orcs and Elves it was populated with as many cliched horror characters you could think of.

It’s up to you as either the 3D glasses wearing, super soaker Uzi armed Zeke or Julie to save as many people from these B-Movie rejects and save the town.

What makes Zombies Ate My Neighbors so much fun is the locations the game is set in, from the start you are heading around the neighborhood rescuing overweight tourists and Cheerleaders from the Zombie hoards who are out to gobble them up.

The Maze-like structure to the game becomes apparent straight away and eases you into what ahead.

Later levels see you in the Mall with escalators and psychotic and armed toddlers running at you between the shop shelves.

You even get to go to Ancient Egypt, Castles and get to take on a demonic American Football team on the football pitch.

There’s a ton of variety in the fun looking levels throughout as you rescue the townsfolk and hunt for the exit key to progress to the next level.

Head For The Hills

One thing that stands out in Zombies Ate My Neighbors are the bosses.

Every few levels you are up against a usually hilarious depiction of some of our favourite B-Movie and Horror baddies.

From Giant Babies to UFO’s, even humongous spiders and it’s all fought out in a sort of Smash TV arena style and due to the size of some of these you’ll need the space to take them down.

It’s fast and frantic throughout and there is a sense of urgency as you rescue people before the baddies get them but if they do you see them sprout angel wings and fly to the heavens.

To aid you in your quest you have a whole host of weapons at your disposal from the default Uzi water pistol to bazooka’s, Crucifixes and even fizzy drink grenades.

A special mention has to go for the sound on the game.

It’s perfectly spooky and atmospheric throughout with the modulated whine of Theramin’s throughout giving you that kitsche vibe that 50’s B-Movie’s and horror films had and really adds to the fun.

Some of the bosses look really cool still but you’ll have to make your way to them to be wowed again and you will be as they are usually pretty huge.

Is Zombies Ate My Neighbors Worth Playing Today?

Zombies Ate My Neighbours is cracking fun, it has tons of levels so will keep you busy for quite a while and is a brilliant addition to any SNES or Mega Drive collection.

With the inclusion of a two player mode it makes it double the fun too and even more so around Halloween or you could just skip it and head for the hills and wait for further instructions. It’s up to you.

Zombies Ate My Neighbors (1993) SNES Classic Review
Is it worth playing again?
Zombies Ate My Neighbors is great fun and will keep you busy for quite some time. Go hunt it down and play it again!
Graphics
75
Sound
85
Gameplay
85
Classic Factor
83
Reader Rating5 Votes
76
Good Bits
Loads of levels will keep you busy
Tons of humour thoughout
Bad Bits
Looks a bit dated
Can get a bit frustrating later on
82
Retroheadz Score