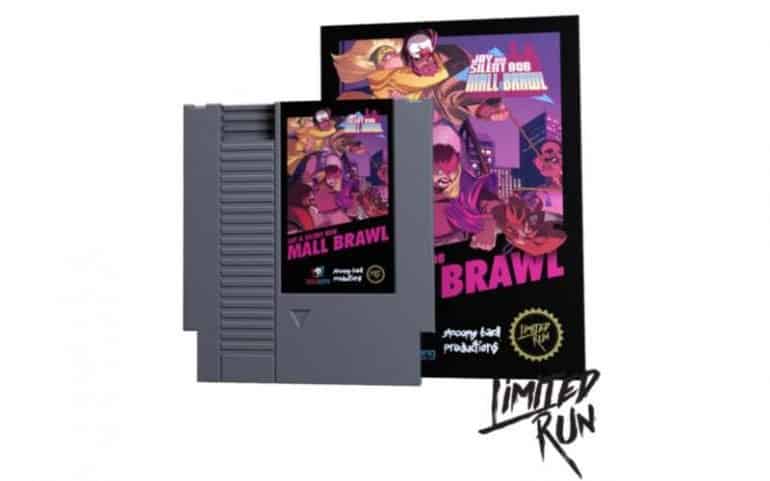 It’s not every day that you get a new release for the NES and it certainly isn’t every day that two cult stoner movie heroes like Jay & Silent Bob make their way into the games world.

You read that right, Jay and his hetero life mate, Silent Bob are going 8-Bit and they’re bringing the View Askewniverse with them.

Get Your NES Back Out

Mall Brawl is a companion game to the upcoming Jay and Silent Bob Chronic Blunt Punch game and was originally pencilled in as a digital bonus feature for the Kickstarter.

Now Limited Run Games have announced that they are bringing the 8-Bit add on to a limited edition NES cartridge release complete with full original styled packaging and it will be region-free too. Nice!

The Game will see the two misfits fighting their way through a familiar looking mall in New Jersey. How familiar?

Well it’s the mall from Mallrats, that’s how familiar.

Not only will the Mall be familiar but the various character you come across will be pretty familiar as well.

You can beat up the Easter bunny, invade the stage of Truth or Date and fight LaFours. Hey, does anyone fancy a chocolate covered pretzel?

Mall Brawl Is The Real Deal

The game looks absolutely great and the packaging is an homage to the original NES games.

Limited Run games have even gone so far as to print the packaging on the same material used back in the day. It has the same flap top design and the limited Run Logo is printed in metallic gold just like the seal of authenticity found on Nintendo cartridges.

As well as the box and the cartridge it also comes with a retro style manual, dust sleeve and even a classic polystyrene block to keep the cartridge raised in the box.

The game itself is styled on classic side-scrolling beat-em-ups like Double Dragon and Streets of Rage and really looks the part as well.

Just look at this awesome retro trailer for the game.

In addition to this limited run there is even a super limited edition with a Book style case, 8-Bit soundtrack, Poster and Art cards.

If you’re a fan of 8-Bit retro gaming and also a fan of Kevin Smith’s classic movies then this is clearly a must have item.

These will no doubt sell out quickly so get on it quickly if you want one and are priced at $54.99 on their website with the game scheduled to be sent to buyers in December 2019.

If you do happen to miss out don’t worry to too much as the game will still be available as a digital add on to Chronic Blunt Punch, Snoochie Boochies.