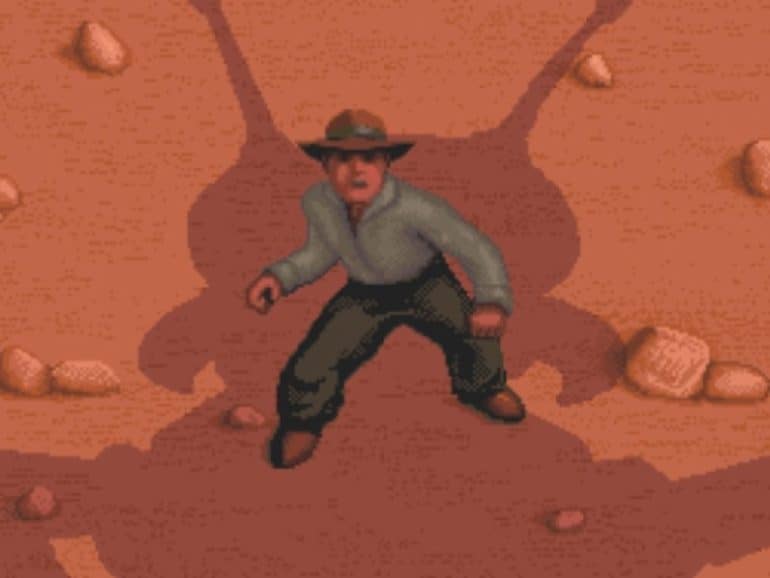 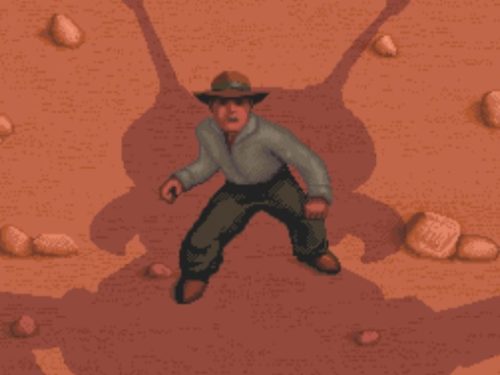 It Came from the Desert came out on the Amiga way back in 1989 and is regarded as one of the best titles to come out of the amazing Cinemaware stable.

The game takes place in the mid-1950’s. Rock and roll culture, cold war paranoia and that white picket fence heyday vibe are in full swing and you play a geologist who’s just moved to the desert town of Lizard Breath.

After a mysterious meteor crashes nearby and blocks off access to the outside world.

It’s up to you to solve the strange sightings of ants who have mutated into 8-foot-tall beasts thanks to the meteors radioactive properties and you have limited amount of time to do this.

The race against the clock is on and you need to solve the mystery and save the townsfolk from impending disaster.

Your own 50s B-Movie

It Came from the Desert Sounds like a B-Movie huh?

It should do as this is what it’s based on and it pulls it off marvelously and really showcased what the Amiga could do and be for serious gamers, even today!

Its full of clichéd characters (and all the more glorious for it) and there’s even some romance thrown in for good measure.

When you play it you will be hooked into the general atmosphere and life that a game this old provides and the story is awesome too.

The game itself has loads of locations and locals to talk to and piece together things so that you can get the authorities in the area on side to help the town.

It a sight to behold and one that any new or old adventure fan will adore.

It’s a sight to behold

The graphics are lush and vibrant and for a game of this age hold up very well given this game is now 30 years old.

You will be impressed, the Amiga was and still is a wonderful machine so it won’t surprise veterans but for newcomers, you’ll enjoy them.

The art style and attention to detail for the era it’s set in really does make you feel like you are in some small and isolated 50’s tumbleweed strewn town.

So, the big question, how does It Came from the Desert play?

The game is split up into elements that all intermingle perfectly to progress the story.

You have the first person sections where you talk to the residents and authorities in the town, asking various questions that help solve immediate problems or help you on your way to the next location.

There are some surprise moments such as when you first encounter the huge ants on a local farm, your only indication that something is amiss is when the farmer your talking to suddenly screams and runs away.

It still shocks today and then all of a sudden a giant ant appears and you get out your gun to take it down.

Once this is done you’re then seeing things overhead where you need to outrun a legion of ants that are hellbent on ruining your day more so than any desert critter would be capable of.

If you get overrun, you’ll end up in the hospital to recover where you have an option of staying and wasting valuable time or attempting to escape against doctors’ orders where they will chase you down.

You will usually fail but it’s worth a go as it saves valuable time as the game is against the clock as the mutant ants progress from the fringes of the map area to the town itself.

The rest of the time is made up of minigames that help drive the plot.

You’ll have to play chicken against some punks who really don’t like you, get in a knife fight and fly a crop-duster and use its toxic cargo to limit the ants movements and buy more time to save the town as you have to convince the Mayor to bring in the big guns from the local army base.

These keep you hooked until the high stakes end of the game where its man v ant in main street and you destroy the nest to save the town and maybe, the world!

Is the best version on the Amiga?

It all adds up to a compelling and well laid out game that keeps you hooked and engaged to the very end and they’ll be bumps along the way where you’ll have extended hospital trips and some genuinely freaky moments in the game.

The graphics are great still considering its age and the Amiga version is the best overall as the PC version has a very basic colour scheme and we won’t talk about the bizarre Megadrive version.

Nec’s PC Engine had a version too that had digitised actors and full speech but it hasn’t aged well at all so for the definitive version it has to be on the Amiga.

The sound in It Came From the Desert is spot on, with an orchestral background on the map area and anything from rock and roll to country and western depending on where and who you’re currently interacting or talking to. It fits the mood and the B-Movie setting perfectly.

The speech in the intro whilst not anything to write home about today was absolutely amazing back in the day and deserves an Honorable mention too as it sets the tone for whats to come perfectly.

Is it worth going back to the desert again?

Well, yes, it is and what would be even better is that it was remade in HD for a new generation of gamers to appreciate what a beautifully crafted game it really is.

If you have an Amiga collecting dust in a loft or cupboard somewhere, get it back and play It Came From the Desert again (or for the first time)

With It Came From the Desert you’ll instantly fall back in love with Commodores awesome 16 Bit computer again and this game is one of the best reasons to boot an Amiga up again.

What do you think of It Came From the Desert? Let everyone know what you think of it in the comments below and don’t forget to add your review score in the box below!

It Came from the Desert (1989) – Amiga Classic Review
Is it worth playing again?
It Came From the Desert is a superbly crafted game. It captures the essence of a good old fashioned B-Movie perfectly and your front and centre throughout. Its Well worth your time in every way!
Graphics
89
Sound
80
Gameplay
85
Classic Factor
90
Reader Rating2 Votes
89
Good Bits
Tons of atmosphere, you feel like you're in a 50's B-Movie
Bad Bits
The overhead sections are a bit boring
86
Retroheadz Score