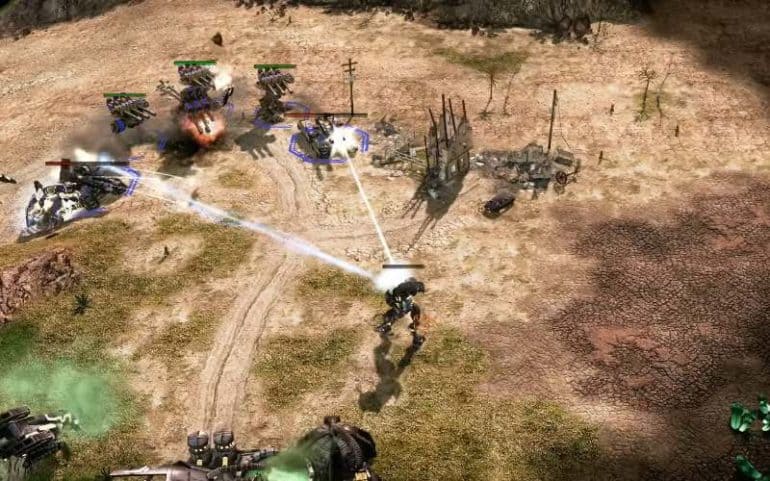 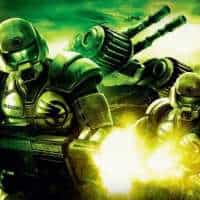 One of the most enduring and epic games franchises is the C&C series and Command & Conquer 3: Tiberian Wars up there right at the top.

The 2007 release from EA saw a huge update since the last entry in the series (Tiberian Dawn) and took things to the next level in regards to how it played and looked.

It’s 2047 and the world as we know it is in massive decline thanks to the spread of Tiberium, the alien crystal that’s been terraforming the planet since the end of the 20th century has now reached critical levels.

Most of the planet is covered in the crystals with red zones being uninhabitable and yellow zones where most of the population lives are facing mutations and misery on a level unknown for most of human history.

GDI however have set up in habitable green zones and life is carrying on as normal as The Brotherhood of Nod headed up by the charismatic and elusive Kane recruit legions of people in the yellow zones to its cause.

Nod has been quiet up to this point and all of a sudden they launch a nuclear missile on a defenceless space station that was the meeting place for most of the GDI’s top brass and this starts off the third Tiberian War and this is where you come in as the commander of either GDI or Nod.

With GDI you need to push Nod out of the US whereas with Nod you need to take out GDI and consolidate your new territory.

It also has the big TV series stars of the time with Battlestar Galactica stars Grace Park (Athena) and Tricia Helfer (Number Six) and Josh Holloway from Lost who help drive the fantastic sci-fi plot as well as Joe Kucan back as Kane.

The acting is spot on throughout and whilst its doesn’t affect the gameplay it took in game acting to a whole new level.

As the Tiberian world revolves around an crystal with immense (and volatile) properties for energy consumption, it’s alien origins finally come to the fore with the arrival of the Scrin halfway through the game.

The Scrin are the third faction you can play on skirmish mode but in the game they are a mysterious force for GDI to defeat whilst Kane welcomes them as he seeks ascension for his inner circle.

The way the Scrin are introduced is brilliant with GDI having to escape from Berlin and retake Europe after missions across red zones and both sides have to defeat both the opposition and the Scrin to ultimately win the game.

As this is set a few years after the last game each faction has new units to wreck havoc on the battlefield with.

GDI uses big guns such as the Mammoth Tank and has the best air fighters too whereas Nod likes playing fire literally with flame tanks and giant robots that can combine other units weapons to become mobile powerhouses of doom for GDI.

Both units are expensive and take their time to build but there’s nothing in the game that can stop a horde of these running wild in the enemies base.

Smaller units also have their uses, APC’s can house rocket troops and lay mines so are very handy for defensive use and both GDI and Nod have special units that can empty garrisoned troops in urban environments either with grenade armed soldiers or flame thrower equipped Nod troops.

Air power is important with Nod using numbers to its advantage whereas GDI is more accurate in its delivery of anti air or ground munitions.

Overall each unit has its strengths and weaknesses and it takes time to master what units to combine to make sure the result of an attack works in your favour as you master the rock, paper, scissors strategy that will be easy for those that play RTS games.

C&C 3’s team had done a stellar job of portraying the bleak landscape of the yellow and red zone alongside the pristine blue zones that GDI inhabit.

It’s easy today to ramp up the graphics settings to the max on most modern computers and whilst it may not look as fresh as current gen games it does a great job with shadows from overhead clouds projected on to the ravaged landscapes and explosions that still look realistic and meaty throughout.

You can definitely see a lot of love went it this game and it still stands up well today.

Command & Conquer has always delivered in the sound and music department and Tiberian Wars is up there with the best.

Frank Klepacki is a legend for C&C fans and he delivers a haunting and desolate soundtrack in the main with orchestral and rock mixing together seamlessly throughout. You’ll be hooked on the sound from the title screen and it helps bring this dark world to life.

As with all C&C games the units also speak and some are more humerous than others although not as funny as the very tongue in cheek Red Alert 2.

However, juxtaposed against the soundtrack it works perfectly after all they’ve had since 1996 to perfect it.

Command & Conquer 3: Tiberian Wars is one of those games that you can come back to time and time again.

It’s a long game and both the GDI and Nod single player missions will take you a few days to get through.

Once you complete the game you unlock four Scrin levels too, these are pretty hard to complete but its a nice surprise as once you finish it you’ll wish there were more levels to play.

Thankfully there’s more to do once the mission end as you can play a load of multiplayer maps against the computer or online against humans. Local battles can be done too.

The only gripe we have with the latest version on Origin is that you cannot put in extra maps like the original DVD version of the game.

This is a huge shame as there are so many fan made maps that are amazing and add new life to versus matches and yes we’ve tried fettling with the game to add new maps but its locked out although its there teasing you on what could have been a great way to expand and enjoy the game.

On top of this its impossible to add the brilliant fan made expansion called ‘The Forgotten’ which is why its worth tracking down an original copy if you can as its opens up so many additional elements to the game.

All in all the Origin version is fun and all the levels and missions are there plus its cheap and easy to get hold of.

It takes up around 11 GB of hard drive space which compared to current games is tiny but the game you get in this package is one you’ll come back to and relive over and over again.