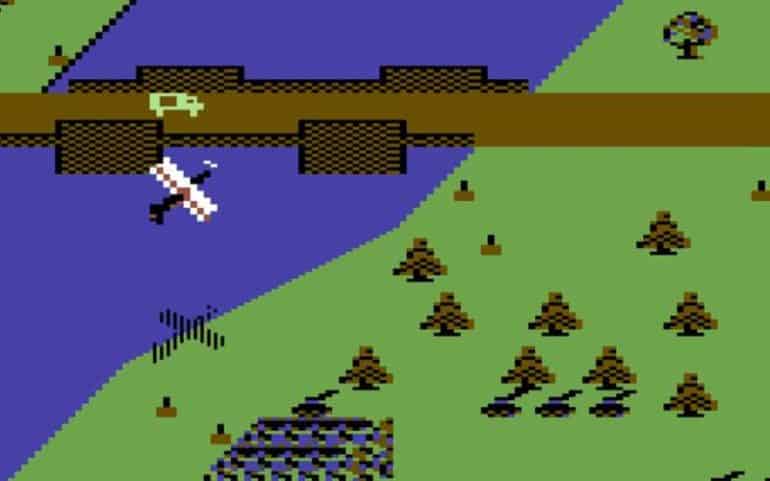 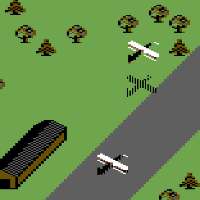 Blue Max is a World War 1 based shoot ’em up that came out on the Commodore 64 way back in 1983 and published by Synapse Software.

Well, you get to control a biplane and machine gun and bomb the heck out of tanks, bridges, buildings and dogfight with other planes and it gets progressively harder as the game goes on as you make your way through the game.

Blue Max plays a bit like Zaxxon in that the game has an isometric view point and this gives a pseudo 3D look to the game and with that control to not only move left, right, forward and back but also up and down.

The plane has two weapons to use, guns and bombs and bombing is done by pressing fire and pulling down at the same time which feels a bit awkward to do and means you occasionally miss a target.

Some targets flash and are required to hit to progress to the next stage, if you don’t hit enough of them you’ve got to replay the level again which can be a bit frustrating but practice makes perfect in this game.

Shooting down enemy planes is hard yet rewarding as you hammer the fire button and shoot your guns whilst also trying to match the height they are at whilst also trying to avoid flax and other planes having a pop at you can make it quite intense in places which only adds to the awesomeness of this classic game.

You’re plane can take some hits and you need to be careful not to fly in to things but if you make it to the end of the level you get to land on an airstrip, get repaired and refuelled which can also bring you down if you run out of fuel so there’s a nice strategic element to it.

For patriotic last night at the Proms flag wavers you’re in for a treat as the soundtrack is none other than Rule Brittania and along with the usual noise sounds of explosions is basic but does the job for such an early C64 game.

Yes compared to today its basic but back then or whenever you originally played this game when you got your C64 it was impressive and looked quite unique.

It easy to spot tanks, ships, bridges and other buildings and other planes and so on and that’s all you can ask for the game really.

Is Blue Max Worth Playing Today?

Whilst Blue Max is not the longest or most stunning game to play on the humble bread bin its great fun while it lasts and of course will evoke instant nostalgia to being a kid once again on your little telly in your room having fun after the tape has finally loaded the game.

It’s jolly good fun still and deserves your time whether that’s on the original machine or emulated if you liked it the first time around you’ll enjoy it once more and who doesn’t want to be Biggles again and once done with this go and play Beach Head which also came out in 1983.